...and some other stuff that I couldn't think of that started with "M" to keep up the alliteration. Usually these roundups are a nice compilation of hits and misses; sadly, these flicks are mostly misses with one surprise hit. 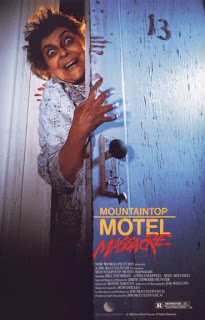 Mountaintop Motel Massacre (1986)
Put this one in the "why the hell did I even bother watching this" category. They got the "mountaintop" part right, and the "motel" part, but the "massacre" part? Barely even worth it. The first hour or more is so boring, introducing us to character after character who aren't all that interesting. The perpetrator of the "massacre" is old Evelyn, a woman who spent a three-year stint in an insane asylum and accidentally killed her daughter while in a rage. She has a nice setup at the motel - an early version of what we saw in Vacancy, with underground tunnels giving her access to each motel cabin. At first she just plays pranks on the guests by setting loose snakes, roaches, and rats in their rooms. BORING. She does eventually start killing people, but in the most dull fashion. Certainly not worth having to sit through the first two-thirds of the movie which is just a whole lot of talking about nothing and no action. I guess if you're seeking out obscure 80s slashers you might be interested in this one, but most horror fans can probably just skip this one and not miss out on anything. 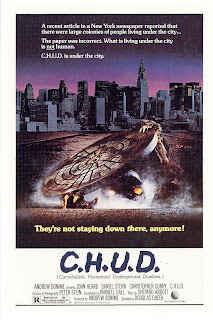 C.H.U.D. (1984)
C.H.U.D.'s a tough one for me. One, I don't really understand all the cult classic love for it as a horror film because there is very, very little horror courtesy of the Cannibalistic Humanoid Underground Dwellers. Two, the movie is actually very serious and political, something I definitely did not expect. None of this is to say that I didn't like the movie, though. I loved C.H.U.D. It's only that I thought I was going to be watching a movie about creatures eating people and enjoying that and stuff, and instead when I was done watching it, I suddenly had the urge to devote my time to helping the homeless. Not that that's a bad thing. Anyway, even if what C.H.U.D. promises is much different than what it delivers, what it delivers is definitely worth a watch. Daniel Stern, whom I didn't know was in any other movie besides Home Alone, is a real joy to watch as the Reverend, and every other actor just takes everything so seriously, you know? I couldn't believe it, everyone was so awesome and really made C.H.U.D. at least an interesting experience for a first time viewer like me who had no idea what to expect. Bring on Bud the CHUD! 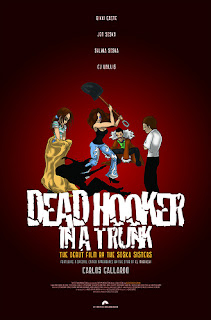 Dead Hooker in a Trunk (2009)
You guys, I so wanted to like this movie before I saw it. I just kept thinking, "Of course I'm going to like this movie! It was written and directed by two chicks and it's called 'Dead Hooker in a Trunk'! This is what I've been waiting for!" And yet, all that determination still could not make me like Dead Hooker in a Trunk. Did I miss the awesomeness that everyone else seemed to find here? Or was this just not the movie for me at the time? I think if it had been more of a straight-up horror or horror comedy instead of some homage to grindhouse I might have liked it more, but all the illogical plot points that kept coming up really turned me off. I still admire the Soska sisters going out and making a badass movie like this - there are some really nice hack-n-slash, gore, and torture scenes and I love the fact that two girls are responsible for that. A lot of stuff here just didn't jibe with me, though, and the movie was quite disappointing. 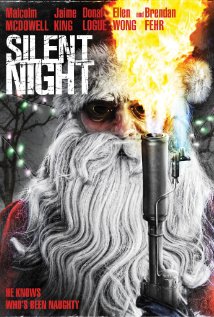 Silent Night (2012)
I don't even know why I bothered. I wasn't expecting anything remotely entertaining or new or fresh from Silent Night. I haven't seen Silent Night, Deadly Night in several years now so I've forgotten a lot of it, but I do remember liking it a lot more than this quasi-remake. Silent Night is cheesy, with all the bad dialogue, tits, and annoying characters one would expect from a movie that never tries to be anything above what it is on the surface. "We're making something about a killer Santa Claus? Nah, this doesn't have to be scary or inventive at all. Just toss in all the cliches and a really fucking unsatisfying ending and call it a day." Yes, Malcolm McDowell is in this and he of course has that strange ability to make everything he's around be 10 times more awesome than it should be, but even he couldn't save Silent Night from being a brainless and forgettable movie that not may people are going to see in the first place. 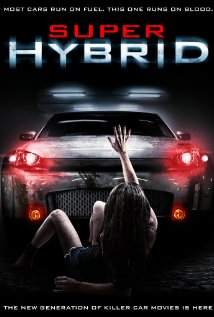 Super Hybrid (2010)
Silly, unexplained premise? Check. Cliched, underdeveloped characters? Check. CGI effects of a giant, octopus-like creature that dresses itself up in the form of cars? Check. Enjoyable movie? CHECK! Yeah, it's true. Despite everything I said about Silent Night being forgettable and silly and not too deep, Super Hybrid could no doubt be described the same way, but I couldn't help it - I liked Super Hybrid! That hour and a half of watching it goes by fast and is strangely interesting. This is perhaps mostly because after you find out that there is some sort of creature under the hood of the strange car brought into a garage at night... you kinda want to eventually see the creature in its true form. That part was a bit disappointing. The rest of the movie is surprisingly not. It's a quick time waster and sometimes I like a good, dumb time waster.
Also, would like to point out that the guy playing Ray took not only his looks but also his character traits from the guy who played the jerky foreman in Graveyard Shift. I mean, obviously. This guy was just less dirty most of the time.

Next post: My Anthology Quest continues! Is the next one an English rock band or a movie starring Boris Karloff? Both, apparently!

Posted by Michele (TheGirlWhoLovesHorror) at 7:44 PM