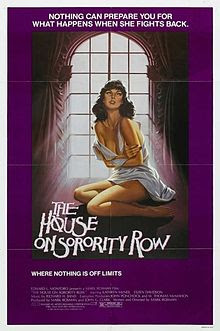 Okay, Netflix. We are going to start having a serious problem in our relationship unless you quit with the lying to me. You made me think The House on Sorority Row was going to be a great slasher. You said in your oh-so-deceptive description that "this gleefully low-budget 1980s horror flick features ample doses of sex and gore." Well, the sex part I don't really care about because I'm not a dude, but you were so totally wrong about the gore part. I'm only going to forgive you for this just this once because although the gore in The House on Sorority Row sucks (a lot), I really liked the rest of the movie. 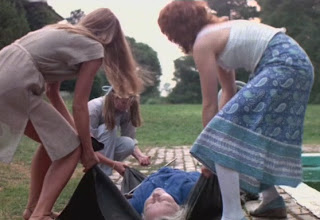 Seven graduating seniors of the Pi Theta sorority decide to finally get back at their evil house mother Mrs. Slater when she refuses to allow them to throw a graduation party at the house. They come up with a horrible idea for a prank that ends with Mrs. Slater's death, which the girl's smartly decide to cover up. But either she didn't really die or someone else knows what they did because the girls start getting picked off one by one (in ways that are so totally not gory at all).

So for anybody with half a brain, you can figure out the end of the movie pretty much from the very beginning. A title card says it's 1961 so this must be a flashback to the house mother's life. She has a back-alley baby basically and we're led to believe that the child died but it's pretty obvious that it didn't and that it's going to grow up to be the person who kills all the sorority girls. I mean, DUH. And of course, he also ends up being a deformed mongoloid like Jason whose mother has hidden him up in the sorority house's attic all his life. Annnnd, also like Jason, he sees his mommy killed by the girls and gets revenge and kills them. He also wears a mask. His name is Eric. 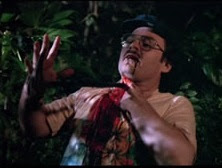 But I didn't really mind that I basically knew who the killer was from the start. I had a good time watching these sorority girls (whom every complains about not being as "hot" as sorority girls should be, but fuck that) try to deal with the situation. Speaking of the situation - children, NEVER try to hide or cover up an accidental death. YOU WILL DIE FOR IT. Just sayin'. I actually liked all these characters, though I was fully prepared not to, and the ones that I didn't really care for are thankfully pushed to the wayside anyway. There are some recognizable faces such as Harley Kozak, of Arachnophobia and Parenthood fame; Eileen Davidson has been on both Days of Our Lives and The Young and the Restless; and our final girl Katherine is played by Kate McNeil from the genre classic Monkey Shines. They all play their roles in House on Sorority Row well, and though they each to play to some sort of slasher character cliche, they are good enough actresses to pull it off. This could very well be the only 80s slasher I've seen where I do actually like the main characters - especially when they are all girls. 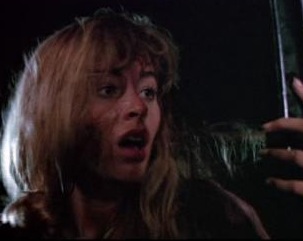 The plot continually surprised me by not going the predictable way and throwing different stuff at me from time to time. There is a lot of stealing from other films, though - Diabolique, Friday the 13th, Black Christmas - but that's to be expected I guess from an 80s slasher. One thing that I really liked they did was the scene after Katherine is given the drugs by Mrs. Slater's doctor. Sitting in an armchair, she has this funky hallucination of dead Mrs. Slater and her dead sorority sisters standing in the open French doors, with Slater's can spinning on the ground by itself. Is this scene out of place in this movie? I don't know, but I loved it, and it looked really good. The one stupid-character-idea move I hated was after Jeanne is first attacked by Eric and she escapes and gets inside where she runs into Katherine. Katherine is all, "Oh you were just attacked and he could still be nearby? Stay here by yourself so he can finish the job" - then she leaves Jeanne and goes to help or whatever. Soon after, Jeanne is killed (she's the one with the head in the toilet). Bah! Such an annoying stupid character move. 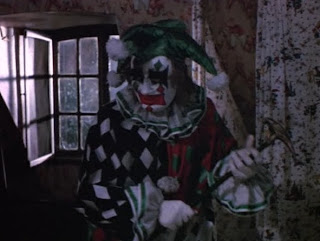 Now, the biggest downside of The House on Sorority Row is the death scenes. They suck. They're boring. The gore is nonexistent. Eric uses his mother's cane as the instrument of death, but he was hardly as inventive with it as he could have been. There's a stabbing through the throat and one through the eye and one fantastic shot of a head in a toilet - but that's about it. Two deaths are off-screen and in another, where Liz gets her throat cut, there is no blood. How can you slit somebody's fucking throat and not have there be blood?! So lame.

The House on Sorority Row is definitely better than its remake, which I hardly remember seeing at all, and more than on par with some similar films released during the same time period. It severely lacks in the gore department and the ending is frustratingly ambiguous, like they just gave up or something, but the acting is great and I liked where the plot went. Good movie.
Posted by Michele (TheGirlWhoLovesHorror) at 3:54 PM