Anthology Quest: Tales from the Darkside: The Movie (1990) 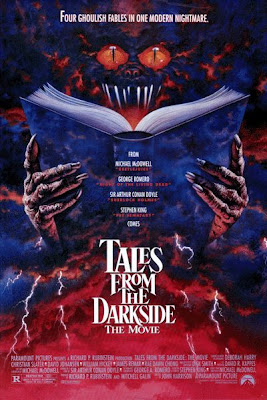 Watching V/H/S a few weeks ago and now catching up on Tales from the Darkside, a movie I've been wanting to see for a long while now, I feel the need to dive into the often odd world of the horror anthology. I've added some classic ones, and some new ones, to my queue and the anthology quest will continue. First up (obviously) is this fantastic little piece of awesomeness from 1990 based on a TV series that I've never seen. Will look into it. 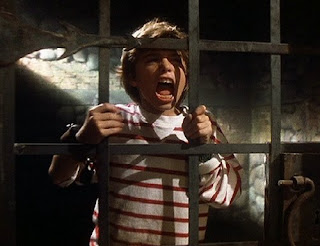 The wraparound story involves a seemingly normal professional woman driving home with some groceries, going into the kitchen, and handing some cookies to the boy she's got in a cage. She plans to cook him and serve him at a dinner party that night, but the boy tries to stall her by reading her three stories from a book she has given him. Why she would be conned into hearing stories she already knows - "Tales from the Darkside" is apparently her favorite book from childhood - doesn't really matter because the stories are awesome anyway.

Deborah Harry of Blondie and Videodrome fame is our Hansel and Gretel-inspired witch, and she plays the somewhat small role with ease and just the right sense of humor to set the tone for the rest of the stories. A tiny Matthew Lawrence is the poor newspaper boy destined for the oven and he doesn't have that hard of a job in this movie, which therefore makes him kinda indistinguishable from another early 90s kid. I liked this wraparound story a lot and was interested in it as a feature story itself, even if the ending was predictable. Well, not totally predictable because these are supposed to be "tales from the darkside" and they could have taken the more dark approach where she really did cook the kid in the oven, but I wasn't counting on that. Anyway, it's a cute story to weave between the following three very different stories 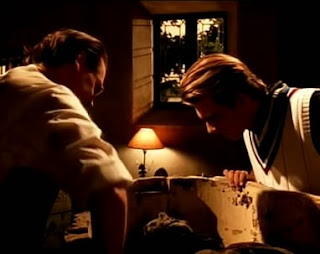 "Lot 249" is the first story told and contains the most star-studded cast of the whole thing. Steve Buscemi, Julianne Moore, and Christian Slater join for this tale of mistreated college boy (played by Buscemi, obviously) who brings a mummy back to life to exact his revenge. I must point out that I love me a screen wipe for a transition, so I was kinda giddy to see them used a few times here. Always makes things more fun. Slater is strangely not annoying as he usually is and actually gives a great performance in his scene with Buscemi tied to a chair and Slater slicing a mummy up with an electric bread carving knife thing. This short also includes a quite yicky death when the mummy does a crude brain extraction on a guy by shoving a needle up his nose. Ew, ew, ew, ew, ew, ew.

The ending to me almost screamed "ghoulishly funny Tales from the Crypt" ending - I couldn't help but expect the Cryptkeeper to be in the next shot, laughing and delivering a cheesy one-liner - but it has got to be the perfect ending for this particular story. 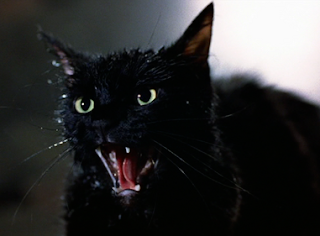 "Cat from Hell" is the next story on the menu and one that I was quite familiar with because it is based on a Stephen King short story. An elderly pharmaceutical tycoon hires a hit man to murder his cat, whom the man claims has murdered his whole family and has him next on the list. Does Stephen King like or hate cats? They always seem to be kind of evil in his stories. Me? I love kitties so this was a fun story for me to finally see on the big screen, despite already knowing the oddball story and conclusion. You just haven't seen an awesome horror story until you've seen a full-grown cat crawl out of dead man's mouth.

Lots of fun here from both King and George Romero, who adapted the story. I really enjoyed the parts where the hit man is chasing the cat around the mansion - although he might have killed it a bit sooner if he would have stopped taunting it for a minute and actually shot it. As if it could actually hear him, you know. Anyway, the ending is of course the best part about this short. Completely unbelievable and ridiculous but so freaking hilarious at the same time. 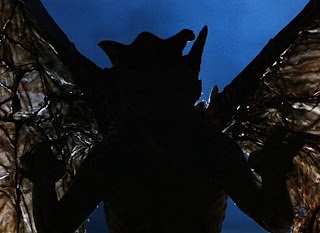 The last story is "Lover's Vow." I wasn't sold on this one at first. I thought it was too boring to be the final short in this anthology because it was more mellow and less exciting and fun as the rest of the stories, but it grew on me by the end. A man, Preston, sees his friend killed by a winged creature (turns out to be a gargoyle) which then speaks to him and tells him that it will not Preston if he promises to never tell anyone that he saw it. That same night, Preston runs into a stranger named Carola whom he immediately falls in love with and seems to save him from his miserable life and the memory of that night. Doesn't really take a genius to figure out that Carola is really the gargoyle in disguise. Sorry if I spoiled the surprise.

I still kind of think that this one is a bit boring, but I also believe that it was a nice way to round out the other two stories which were much more kitschy or tongue-in-cheek. Lover's Vow was more romantic, or as romantic as a horror tale can be, and had a very heartfelt ending. There are some nice creature effects for the gargoyles here. Which reminds me, KNB is responsible for all the effects in the film, and I love them so I gotta give them their props. You guys rule.

So, as a horror anthology, Tales from the Darkside is pretty great. The three stories, plus the wraparound, all compliment each other well with each one standing out for different reasons. Big thumbs up! I'm digging it, and I can't wait to dig into some more anthologies.

Posted by Michele (TheGirlWhoLovesHorror) at 4:47 PM