In an effort to continue being perpetually late to every new trend in the world, I finally broke down the other day and signed up on Twitter. Mostly I just did it because I was getting a little annoyed with being left out on stuff that people only do on Twitter, and I'd be over in the corner grumble-grumbling, saying "But I don't have a Twitter account and I don't WANT one!" So now I have one and I feel more a part of things.

I also like to talk to my peeps in the horror world and just in the few days that I've had the account, I've already had little exchanges with two different filmmakers that I like and that is just freaking weird and awesome at the same time.

Anyway, if any of you peeps want to chill with me on Twitter, pretty much all variations of The Girl Who Loves Horror handle was taken so I just had to go with my name -- @micheleneggen, but my name still appears at GirlWhoLovesHorror so I got the blog worked in there some way! Tweet away, horror fiends!
Posted by Michele (TheGirlWhoLovesHorror) at 8:22 PM 8 comments: 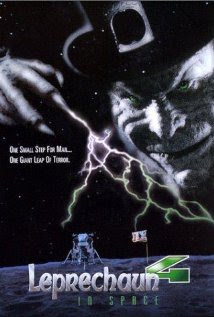 Well, I mean... It's all pretty much right there in the title, guys. The leprechaun. In space. Not exactly my idea of a very logical step in this particular franchise, but maybe they just figured, Fuck it! Let's do it! And actually, I'm kind of glad. Because if I wasn't doing these reviews, I might not have ever bothered with Leprechaun 4: In Space, and then I would never have been introduced to its brand of cheesy. And cheese is like one of my favorite things ever. 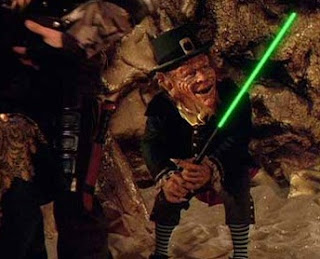 The leprechaun is back and this time he has kidnapped the beautiful Princess Zarina, so that he may wed her and usurp her father as king of her home planet. However, a small group of Marines have been sent to destroy the leprechaun (thinking he is some kind of alien). They are joined by their commander, the elusive Dr. Mittenhand; his plucky assistant, and a pretty biologist tagging along to collect any alien samples they come across. Things are about to get crazy on this boat.

Okay, first off - don't ask me how or why the leprechaun is in space. Don't ask me how he has managed to come back in any of these movies thus far after being destroyed in the previous one because the only explanation they come up with to answer that is that he is "eternal." I guess after he gets blown up at the end of these movies, he just, like... re-materializes somewhere else? Sure, let's go with that. Anyway, he's in space now. He still cares about his gold, but now it seems like he wants a little power, too, because he wants to be king of some ridiculous made-up planet. He's not into this marriage for love, that's for sure. 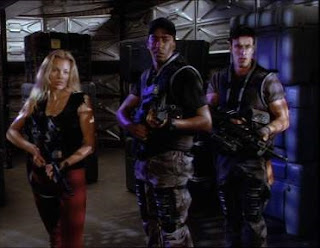 As for our Marines, they are your typical rag-tag group of hot dudes and one chick (there's always just ONE chick), under the rule of a Platoon-style sergeant known as just Sergeant. I started calling him Metal Head just because of the obvious fact that half of his head is covered by a steel plate, and found it absolutely hilarious when I saw that the actor is actually credited as "Metal Head." What's also absolutely hilarious are his cross-dressing scenes later in the movie. You might want to watch the movie just for that. That and Mittenspider, but we'll get to that. Anyway, the only other recognizable face to me (besides Warwick Davis, of course - always a sport for returning!) was Jessica Collins as Dr. Tina, the scientist who also ends up being really hot and brave and kicks a lot of ass. And NO, I don't know her from The Young and the Restless. I know her from Nip/Tuck. 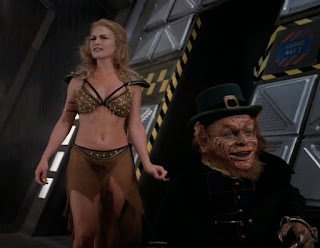 Oh man, so much craziness to mention. How about when the leprechaun gets blown up (as usual) at the beginning of the film? Of course that's not the end of him, because one of the Marines pisses on his body, and something seriously wicked happens because when the Marine is hooking up with the female Marine, he starts to have problems with his junk, and that problem is the full-grown leprechaun emerging out of his body... out of his junk. Kinda reminds me of the birth of Venus - only I'm not really sure which is the weirder story out of those two. For the climax, the leprechaun gets to be a big boy when one of those super-techy futuristic laser beam machines causes him to grow exponentially. But then all he does is fumble around the cargo bay for awhile instead of really taking advantage of the situation, so that was kind of disappointing. What wasn't disappointing was seeing the leprechaun with a light saber, albeit briefly, or seeing Harold (the pervy lab assistant) getting his head smushed flat with a silver serving tray. Almost had one of those moments where soda came flying out of my nose on that one. 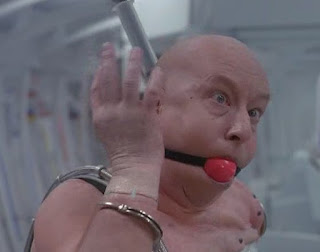 So Dr. Mittenhand gets his own paragraph. This guy is awesome. At first I just liked him because he had a hilarious accent with hilarious acting to match, but then he got way more awesome when it was revealed that he is part cyborg, in a way. He's literally only a head and shoulders and one arm, with liquids and other unseen stuff keeping the rest of him alive and functioning. When Mittenhand (second best name ever, by the way, behind Bugenhagen) finds out that Princess Zarina's DNA has powers of rejuvenation he of course decides to try it on himself. But the leprechaun decides to play and adds a spider and a scorpion to the DNA, then injects into Mittenhand. He then becomes... the Mittenspider! Just imagine a much larger version of the Brundlefly and with more legs and the scorpion tail with these nasty little white sacs all over it. Did not see that development coming, but it definitely made the movie a lot more interesting than I was expecting it to be.

It all ends (sorry for all the spoilers, but that's kind of what I do) with the giant leprechaun getting sucked out into space and exploding again and then the giant leprechaun's hand flips off our remaining survivors through the space ship window. Leprechaun 4: In Space is crazy, silly, and weird, and I really wouldn't have it any other way. Can't wait to go into da hood with the next two movies!