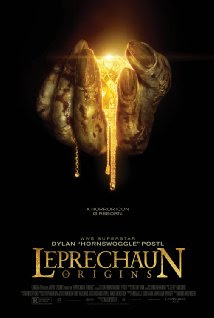 Another franchise is in the can, fiends, and it's time to say goodbye to the Leprechaun. Well, actually, we said goodbye to him with the last film, because things went in a much different direction for this "origin" story. More on that later, though. I enjoyed the Leprechaun movies a lot - there's no doubt that Leprechaun 3 is my favorite and by far the most fun film of the bunch - but all of them had their own quirky charms. Haha. Charms. Anyway, let's finish things up with Leprechaun: Origins. Four young friends backpacking through Ireland come to a small village that promises to hold exciting historical sites. Staying overnight in a local cabin, the kids suddenly find themselves the prey of an ancient creature that is out for revenge and especially blood - and it's not the only foe they have to fight as they try to survive the night.

So this is definitely a complete 180-degree turn from all of the other Leprechaun movies in that this is the first film of the series that is a real horror movie. The comedy side has gone almost completely out the window, and this movie takes on a far more darker, serious tone. Warwick Davis is sadly nowhere to be found. Instead, the leprechaun is a growling, bloodthirsty creature that is kind of like an evil Gollum, the Uber Vamps from Buffy, and the crawlers from The Descent put together. The events play out like any similar flick does, in that it is your typical chase movie with the kids getting picked off one by one. And in that regard, it's not bad at all, I have to say. It hits all the right beats and has a few good surprises. 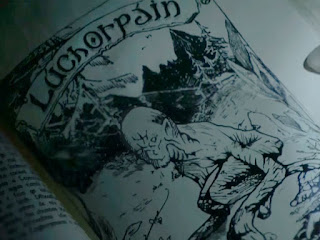 But my overall feelings about Origins are still conflicting. When looking at it as just a horror movie, it's totally fine. I love creature features. And I understand the filmmakers wanting to take the story to a darker place, and use the actual ancient mythology of the leprechaun as the basis for the story. The thing that I kept thinking about after watching it, though, is that that was never what the series was in the first place. Origins doesn't fit at all. It's not like the Child's Play series where the first one was scary and then the series got campier so they tried to bring it back to its creepier roots with Curse of Chucky. The Leprechaun was never scary, it always had that campy appeal, so this sequel could have easily just been another run-of-the-mill creature flick without adding the Leprechaun name to it. Doing so changes the trajectory of a franchise that never seemed like it was heading in this direction at all. But... I still dug it on a certain level. See what I mean? Conflicted. 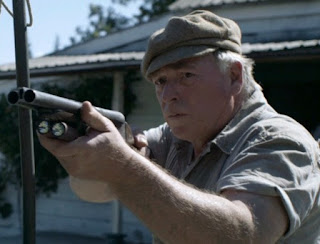 The four main characters are Sophie, her non-interested boyfriend Ben, and the fun-loving couple Jeni and David. Sophie is the obvious heroine and final girl from the start, and she's good in that role. You get sympathy for her character because Ben is pretty much a dick, a trait that he shows several times in his actions throughout the movie. We don't get to learn hardly anything about Jeni or David but I still liked them. The film is much gorier than I was expecting, and the practical kills and other effects are great looking.

There's really only a few nods to the original films, and I'm not even sure that one of them was a nod, but I like to think that it was. The obvious one is at the end with the line "Fuck you, Lucky Charms!" Got a good chuckle out of that. The other one that might not actually be one was at the beginning when the leprechaun obviously attacked a character and there's a shot of his hand with one finger missing. In all the previous movies, the leprechaun has got a thing for either biting or ripping off people's fingers, but I don't even know if anybody else ever cared about this, so it might just be an homage in my eyes only!

Like I said, as a straight creature feature horror film, Leprechaun: Origins does its job, and does its job pretty well. It doesn't really belong in the Leprechaun franchise, but the fact that it is so different from all the other films makes it easy to separate it from them.

Posted by Michele (TheGirlWhoLovesHorror) at 9:06 AM 4 comments: 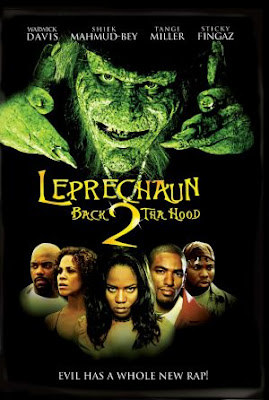 Because we didn't have enough fun with the wee little Irishman duking it out with some people in the hood, we've come back to that place for part six of this crazy odd franchise. I didn't enjoy Leprechaun: Back 2 Tha Hood as much as the previous entry, but the two movies are still pretty similar in that they suffer from some similar problems. They're still way fun, though, don't forget that! 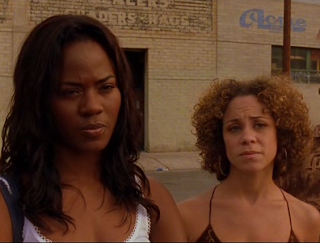 A group of down-on-their-luck friends think they've found the answer to all their problems when one of them, Emily, finds a chest of gold hidden underneath an abandoned construction site. But of course, that gold belongs to the murderous leprechaun who soon returns to take back what is his and kill anybody that stands in his way.

Leprechaun 6 does have a lot of good points that work in its favor. The characters are all sweet, likable, and relatable to the audience even if they are not in the same situation. Actually, the story that is going on between the four principals could easily work in a different movie and be a pretty good crime drama or something like that, no joke. Emily is the lead girl who has ambitions of leaving town to go to school, and she has the support of her friend Lisa, who also seems to aspire to higher things. Rory is the drug dealing playa, but he also just seems like a good guy playing the cards he was dealt. Jamie is the loud clown of the bunch, and I couldn't get over how much he looks like Biz Markie. So there's a good group here that does a good job with what they're given. 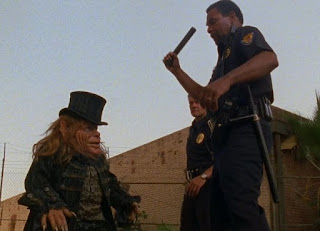 And what they're given is unfortunately not much. Leprechaun 6 suffers from a similar problem that I had with Leprechaun 5, where the entire tone of the movie is just off. The titles for both movies alone suggest something that should self-referential and ridiculously fun but neither one of them fully live up to that. Back 2 Tha Hood has several moments of cheesy, tongue-in-cheek humor for sure, but it needed that tone throughout to be much more enjoyable. At times it just feels like the movie is taking itself way too seriously and forgetting that it is Leprechaun-Freaking-SIX. There's really no need to think much beyond that. Another small problem I had was in the change of the characters' motivations with the gold. Once Emily realizes the trouble they are in with the leprechaun, she keeps trying to convince everyone that they should just do what he says and give it back. Yet, every single time they are confronted with the leprechaun and have the gold in their hands, they keep running away from him instead of giving him the gold! That got a little frustrating after watching it happen a few times. 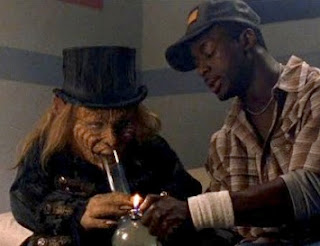 Those humorous moments that I mentioned before are really great when they come along, and are some of the most enjoyable parts of the movie. Probably the best exchange of dialogue is between Jamie, Rory and later on this white guy who comes to buy drugs from Rory. Jamie and Rory have a talk about how the word "nigga" has been replaced by "ninja" and that they should start calling each other ninja. Then the white guy enters the conversation and tries to prove how "down" he is by calling Rory "my nigga" - and there is literally the sound of a tire screeching in the background as everybody stops in shock, even the background actors. Kind of genius, if you ask me. Other good moments include the scene of the lep smoking a bong (hey, you knew they were going to have a scene like that again!) and then stabbing a guy with said bong; and the encounter with the cops where one winds up getting his entire leg ripped off. A bit more humor comes from the fact that the leprechaun just keeps getting his ass kicked through the whole movie by pretty much everyone, and the reactions that Warwick Davis gives for these scenes are priceless. This series would most definitely not be the same without him, as I'm everybody would have been severely disappointed to see another person try to step in his role. We love you, Warwick!

And that's really all she wrote, folks. Leprechaun: Back 2 Tha Hood is a nice try, but I still can't help but feel that this movie would have been more successful if they had just committed to one tone and ran with it. Otherwise, the movie feels very disjointed at times. Next up is the origin story that isn't really an origin story (or so I've heard)! Can't wait!