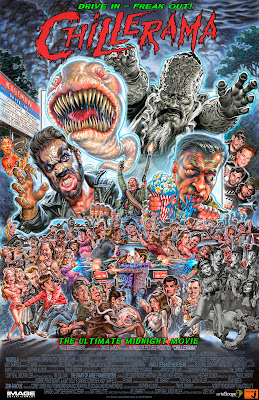 I was wondering why I hadn't heard anything about Chillerama before despite it's just being released in 2011. There is a lot of talent behind all of the segments in this anthology, including directors Adam Green, Joe Lynch, Tim Sullivan, and Adam Rifkin, and I definitely feel the love that these guys have for the genre but this resulting movie is almost a complete failure, at least for me. Chillerama is mostly humor but it is the most juvenile, frat boy crap I've seen in a long time. But again, that's just for me. I would never want to potentially ruin someone else's enjoyment of a movie because I don't like this kind of stuff. 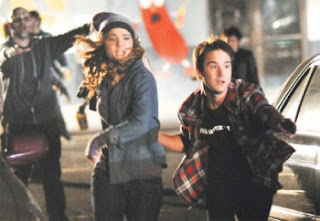 The wraparound story in Chillerama starts out with a man digging up his wife's ten-year-old corpse to, um, defile it a bit, I guess and ends up with her coming to life for a second and biting his penis off - thus the zombie sickness occurs. The man then heads to work, which is at an old drive-in, run by Cecil Kaufman. The theater is celebrating it's last night open by showing four rare horror films - "Wadzilla," "I Was a Teenage Werebear," "The Diary of Anne Frankenstein," and "Deathication." As various drive-in goers enjoy the show, the zombie plague that the dude in the beginning brought in begins to spread after his bluish zombie goo gets into the popcorn butter. 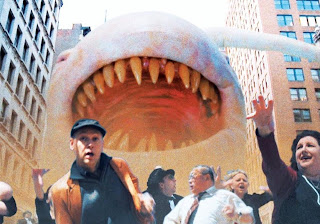 "Wadzilla" is first up on the chopping block and is supposed to be a nod to the "giant [insert menace here]" B-movies of the 50s. In the hands of these yahoos, that becomes a story about a man who goes to the doctor to increase his sperm count and takes an experimental drug that ends up making his one measly sperm turn enormous and wreck havoc on the city. Yup, a giant sperm. With teeth. Must've sounded just hi-larious when they were throwing it around the idea room, but this was completely lost on me. The costuming and overall feeling of the segment is nice in a cheeky, whimsical way; there are some funny gore gags; and Eric Roberts shows up later (the wonderful Lin Shaye also has a small part here, and in the next short) - that's about it as far as positives go. The special effects just get epically more bad as the story goes on - and I totally realize this was part of the whole point of the piece, but damn, was it painful to watch. 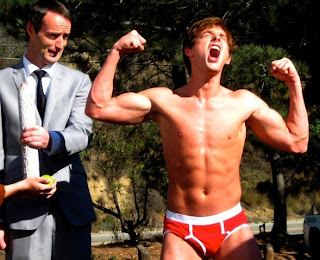 "I Was a Teenage Werebear." Oh, how unprepared for this I was. Not being a part of the gay male subculture, I had no idea what the fuck was going on for most of these awful 15 or so minutes. Wiki says that "Werebear" is a parody of Grease, Rebel Without a Cause, and Twilight but I mostly caught Lost Boys references. Anyway, this is about a young in-the-closet kid who meets up with some other kids who turn into these hairy, cannibalistic, leather-clad vampire things when they're feeling all gay and awesome. "Bear" is a name used by gay men to describe a hairy, burly man. I couldn't relate to or understand this piece so it didn't work for me, although it does have some really hilarious moments. The main guy's girlfriend gets a nasty head wound early on and spends the rest of the time gibbering like an idiot. She does a really fun job at it and I loved it. The few gore gags are cheaply done but still effective at keeping up the campy tone. 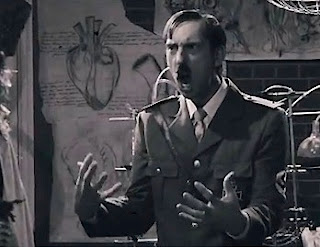 Okay, finally something I can get into! "The Diary of Anne Frankenstein" is Adam Green's segment and by far the best of the bunch. So apparently Anne Frank's full family name is really Frankenstein and they've got some special book that shows how to build a monster. Hitler shows up at the beginning, takes care of Anne and her family and takes the book, eventually building what turns out to be a Jewish Frankenstein Monster. This segment works mainly because of the amazing and hilarious performance of Hitler by actor Joel David Moore. For "Anne Frankenstein" to not be completely offensive and awkward, Hitler had to turn into a cartoonish buffoon  that is easily made fun of and Moore is fantastic at this with every second of his screen time. Most hilarious is the fact that though the whole thing is in German and subtitled, it's easy for anyone who doesn't speak German to catch on that after a while, Hitler goes from speaking what I'm guessing is standard German to just spouting out nonsense. At one point I caught him saying "Osh Kosh B'gosh!" Kane Hodder is Meshugannah, the Jewish Frankenstein monster and the woman playing Eva Braun is equally hilarious in her role (so is her slutty Nazi outfit).

The last segment is "Deathication" and is thankfully a fake-out that is cut short when the zombies take over the drive-in. It's just a bunch of poop-themed gross-out scenes, so nobody really misses anything. But Dan Akroyd... that was awesome. 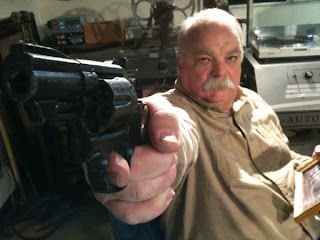 Then the wraparound, "Zom-B-Movie," takes over for the rest of the time. It's got a great, really clever title and is about horny zombies with teal colored blood attacking theater goers by sort of having sex with them and ripping them apart at the same time. A lot of crazy and gory stuff happened here and it was all so well and funny, if not totally disgusting and abhorrent - but that's what makes it amazing. I would have preferred a more straightforward zombie story, but then it wouldn't have been a spoof now, would it? Then at the end, "Zom-B-Movie" zooms out to reveal that the movies within a movie was actually within another movie that the four directors are watching in a theater.

Basically, I could have completely done without three of these stories and not missed too much. "The Diary of Anne Frankenstein" is the only enjoyable segment of the bunch, along with most of the wraparound. Sometimes I have with a movie is that it only caters to one specific audience. Chillerama's audience for the most part does not include me because I am not a 13-year-old boy. Am I getting too old for this shit or is this really not funny in the first place? I like a good love letter to the genre type movie, and I just wish they had been a little more clever with their approach and not so ridiculous and juvenile.

Posted by Michele (TheGirlWhoLovesHorror) at 2:22 PM