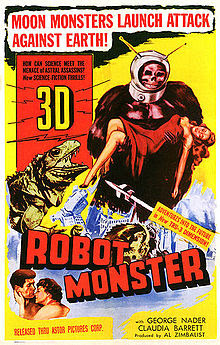 I can't believe all the ridiculous problems I had trying to watch this movie that is only an hour long. But I finally watched Robot Monster, assigned to me for Project Terrible by Maynard Morrissey, and boy, was it completely not worth the wait at all. There is mild charm in the all-around awfulness of Robot Monster, a feat that only really, really bad movies seem to accomplish. However, seeing it once is more than enough. 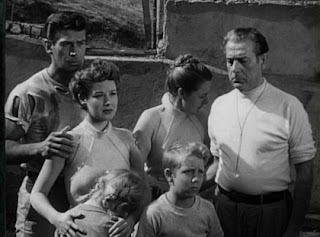 A creature from another planet known as Ro-Man has been sent to Earth to wipe out the rest of the human race after most had been destroyed by death rays or something. Six people remain - a boy, his two sisters, and his mother, as well as two archaeologists the boy met in a cave - and they have some kind of immunity against Ro-Man death rays. But Ro-Man will surely find a way to kill them... or will he?

Heh. Actually, none of that really happens. To spoil everything right from the start, the whole movie is a dream. God. Damn. It. I should have seen that coming after things stopped making any kind of sense in the beginning, when the boy, Johnny, falls in the entrance of the cave and suddenly the entire freaking story does a complete turnaround for no reason whatsoever. Now it just seems so moot to spend a few paragraphs griping about the ridonkulous shit that happens in Robot Monster because it was from the mind of a bitchy little kid. Not fair. 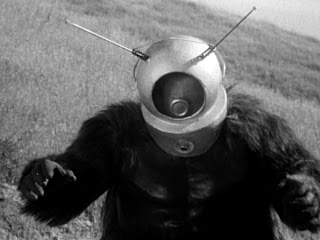 There are some things that I must talk about though. First of all, Ro-Man himself who was truly fantastic to behold. I just want to know who in the heck thought that a thing from another planet would be a gorilla in a scuba diving helmet. Not that anything in this movie really makes any sense, but come on. I think the true story actually is that the filmmakers had a gorilla suit laying around or something and decided to use it in Robot Monster. Nice ingenuity for saving on the budget. Sixteen thousand dollars can't get you squat, apparently, least of all a costume that resembles either a robot or a monster.

Speaking of things taken from other movies, there are some other nonsensical scenes in this movie that can be explained by the simple fact that they edited in scenes from other movies. Of course I'm talking about the random scene at the beginning (and one later at the end) where Johnny gets knocked out in the cave. There's some flashes of light coupled with a really annoyed sound effect that gets repeated over and over and over again, and suddenly a giant lizard and komodo dragon (I don't know if that's what they really were, I'm not an animal expert) are rolling around the desert fighting. Say what? Wh- where did that come from and what does it have to do with Ro-Man? Nothing, really. 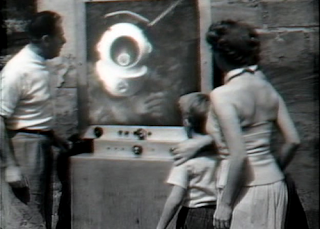 And then there's the people. If this really had been an end-of-the-world story, I would have been ashamed that these people were representing the human race. They're idiots. I was rooting for Ro-Man most of the time because these guys don't really do anything productive to try to stop him. They waste time wandering around the desert, arguing with each other, then suddenly falling in love and having an impromptu wedding. Dumb. Just dumb. The best part about this whole little scenario is when Karla, the little girl, utters one of those great "kids say the darnedest things" lines. It is implied that Alice, Johnny's older sister, and Roy, one of the archaeologists, kind of get a little kinky in the desert together. When they return to the "house," Karla asks them if they've been playing house together. I almost died with laughter. But that's about where the amusement for Robot Monster ends.

I am just so glad that I had to jump through all these hoops to get this movie watched for Project Terrible (thanks, blog buddy!). I can now say that I have seen yet another of one of the worst movies ever made. Is that good for me or bad for me? I can't decide.

Take us out, hard-to-read title screen... 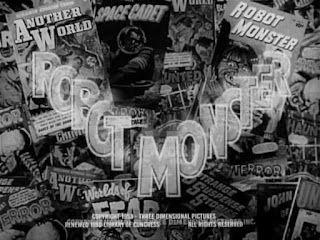 Posted by Michele (TheGirlWhoLovesHorror) at 5:33 PM