I've been back home from Florida (which was AWESOME, by the way) for almost two weeks now and, aside from some preemptive Project Terrible business, I have not done a single horror-related thing in that entire time. No movies, no reading any other blogs (which I feel really bad about, but I will explain my actions in a few seconds), no anything having to do with horror or even movies in general. Normally, I would feel very nervous and terrible about this sudden change, but I'm actually feeling pretty good about it.

You see, I think I was starting to get a little burned out, and this blog was feeling more like homework that I wanted to put off rather than something I really loved doing and looked forward to. I still had all these movies I wanted to or needed to see and I had absolutely no motivation at all to even attempt any of them. So I think it's been good for me to recharge the batteries, so to speak, and take a much-needed break from the world of movies - if only just to remind me how much I love it and missed it while I was gone.

So, blog buddies, The Girl Who Loves Horror is not defunct! She will return, and hopefully with a vengeance... and hopefully soon, because she really needs to stop watching the entire series of Dawson's Creek on Netflix and get back in the horror saddle before all the wise-cracking teenage angst makes her head spin like Linda Blair.


Seriously, though. Dawson's Creek was a great show to watch while you were still a teenager yourself, but as an adult? You really just want to beat the snot out of Dawson and his friends and tell them to stop whining.

Aw, this is so sweet, you guys. Tomorrow morning the family and I are heading out for a week of fun and sun at the beautiful beaches of Navarre, Florida. Am I stoked? You bet I am! Keep up with the blogging and I'll be back... well, when I get back! Will miss you all!

Sidenote: Found out this cool tidbit about the little town of Navarre - it's where they filmed the beach scenes for Jaws 2! Love it!
Posted by Michele (TheGirlWhoLovesHorror) at 7:41 PM 7 comments:

Today is a day for all Satan-worshippers to rejoice, for unto this day - the sixth day of the sixth month at the sixth hour - He has been borne a son and his name was Damien. 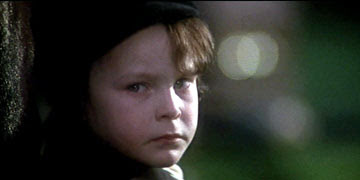 Remember, if you wish to show your love and devotion to Damien, you could always hang yourself out of a window... 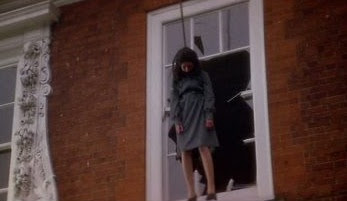 ...but I wouldn't recommend it. Instead, just get him a little Rottweiler friend (no baboons, please) to help you protect him and stay out of his way when he's trying to get rid of his enemies, i.e. another child inside his adoptive mamma's belly. 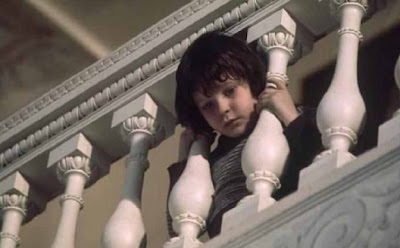 Oh, look how nonchalant he is about his conquests. Our Damien is going to grow up to be one strong and powerful man. He makes me so proud! Okay, all together now:

Posted by Michele (TheGirlWhoLovesHorror) at 6:11 AM 3 comments: 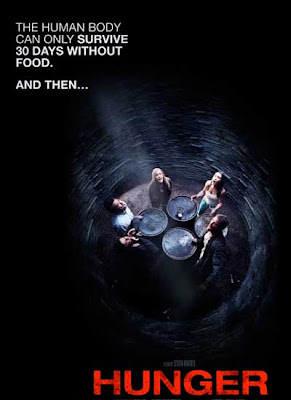 Hunger is one of those weird movies that I watched randomly, knowing that I should probably be watching other, probably better, movies. You know what I mean? I thought this one would just be a fluke and I would forget about it as soon as it was over, but it actually kinda got to me on some level. Hunger is a bit predictable, not terribly original, and is most likely a total bore to anyone who doesn't get into it right away, but I still liked it.

Five strangers wake up in a dark, underground cave-type setting with no way out. They are trapped in one small room with a strange clock on the wall and a couple hundred gallons of water in four barrels. A cryptic note leads them to discover their captor's objective: to see how long they can last without food, and whether they are willing to do the unthinkable as their hunger deteriorates their bodies. 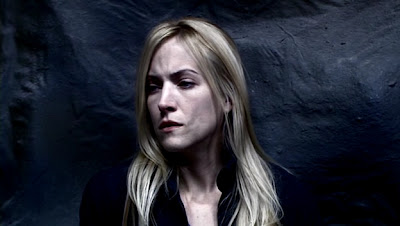 Lori Heuring as Jordan is the only recognizable face to me, as she has had relatively smaller roles in some other movies I've seen (most recently, the uninspiring 2006 flick Wicked Little Things). It's clear from the beginning that she is the star of the movie, and that she is also the smartest and most rational character of the five. The other characters include the less rational and mouthy Luke, the timid and untalkative Alex, the fragile and weak Anna, and Grant, Jordan's closest ally who is just as rational-thinking as she is and one of the only people to actually try to do something to get out of the situation.

Yes, these characters are a bit cliche, and yes, these are exactly the kinds of characters that you would expect to be in a movie like this. However, I'm letting that slide a bit because in reality, these are also the kinds of characters that you need in a movie like this, for the simple reason of creating conflict. No conflict, no story - it's a basic literature/movie rule. The conflict in this story is that these people are hungry and dying after several days and weeks without food. He has specifically chosen these people for their differing personalities. The question then becomes who will be the first to crack, and who will be the first to be killed for food (because you know it's gonna happen eventually), and how it will all play out. And while all this is interesting to watch, I really think that this movie at the core is about Jordan, and her resilience and refusal to become a "savage" (as she puts it). 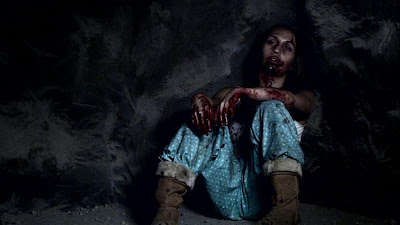 The supposed scientist that's behind all this is unnamed and his motives or reasoning behind why he's doing what he's doing is almost painfully obvious from the beginning. I actually didn't mind his reason for kidnapping these people even though it was not for any real purposeful gain other than something purely personal. Flashback scenes reveal to the audience that as a young boy, the scientist was involved in a car accident that left his mother dead instantly and him pinned in the seat next to her, trapped for several weeks. See where this is going? Because of this man's guilt or inability to understand his own actions (specifically: eating his dead mother's flesh to stay alive) he seems to have become obsessed with studying other people in a situation similar to what he went through. Human skeletons in the room let the victims know that he has done this before and it hasn't worked out well for the others. But I have to say, I don't really see what the scientist thinks he is going to learn from all of this.

Sidenote: This is really irrelevant, but I have to point out the fact that this movie boasts one of the grossest and dirtiest sex scenes I have seen in a movie, and not because of the acts committed. Thinking that they've gained control over the others and that they will "win" their captor's game, two characters decide to have some raunchy sex in the water room. They have been trapped for over 20 days by this time - with no showers. Ewwwww. I'll chalk it up to hunger/captive insanity or whatever, along with the moral breakdown of the characters, but that's... just gross. 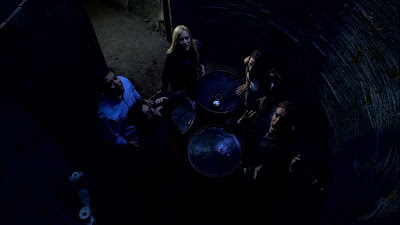 The gore from the eventual cannibalization of one captive is mostly unseen but I really liked the scene when it finally happens. It is revealed in a very subtle, yet powerful, way and was very effective. The rest of the camera work is pretty standard, the editing is nicely paced, and overall the movie doesn't look that bad. It starts out a little annoying because the scientist doesn't turn the lights on in the room until the victims have been in captivity for three days. The first ten or fifteen minutes of the movie are almost in total darkness with only a small circle of blue light on the characters' faces. This went on a little too long in my opinion and they should have turned the lights on sooner.

I think it's kind of weird that I liked this movie as much as I did. Hunger isn't something I'd usually get excited over, but the way the story is revealed and played out was much different than I expected. It's labeled as horror, though I would call it more of a psychological drama and a pretty good one if you like this sort of thing. Don't go out of your way to see it, but I don't think you'll be too disappointed if you do see it.