Catching Up On The Classics: Diabolique (1955) 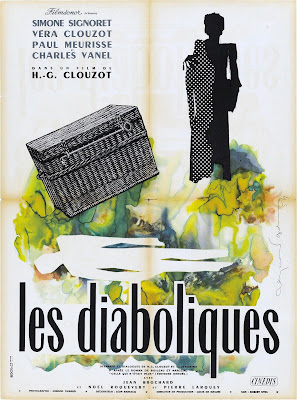 Diabolique is one of those movies that reminds me why I love movies in the first place. It's a brilliant movie that doesn't really need to do a lot to be as brilliant as it is. Diabolique is so many things all rolled into one - a classic noir film, a suspenseful mystery, a twisted drama - and it all leads up to one well-known and stunning climax. 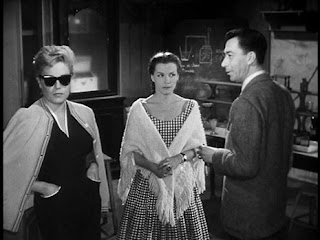 At a boarding school in France, the wife of the cruel principal and his mistress secretly plot the man's death to finally be free of his abuse. After drowning him in a bathtub and dumping his body in the school's murky pool, they think they are safe and their plan has worked. But when the pool is drained, they find that his body has disappeared. People start claiming that they've seen him around and physical clues also lead them - and an inquisitive private detective - to believe that something very mysterious has happened. 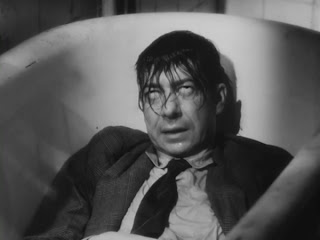 The movie's French title, Les Diaboliques, translates to "The Devils" and I guess that refers to the two women. There's Christina, a teacher and the principal's frail wife who suffers from a heart condition. She's married to Michel (not me), a guy who is a total dick, and physically and emotionally abuses his wife and his mistress, Nicole. She's also a teacher at the boarding school, and is this hot little blonde femme fatale who I thought was pretty awesome. Nicole and Christina have apparently known about each other for a while and have actually developed somewhat of a bond. Their relationship seems a bit scandalous seeing as how they don't hide the fact that they are "friends" from anybody at the school, including Michel. His attitude toward their relationship is interesting, too. He doesn't care. He's that much of an asshole that he doesn't think these girls can do anything against him. 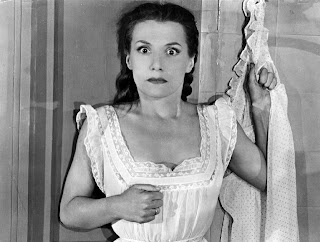 This movie plays out very much like a stage play. There's not a lot of action and the film mostly consists of talky-talky between the characters. Of course that's not a bad thing because the audience gets to know the main characters and is able to feel all their same feelings of confusion and fear when the plan goes awry. There is also not a lick of music to be heard during the film, except during the opening and closing credits. This increases the suspense as the mystery goes on and makes the audience feel like they are in on these women's dirty little secret, but are just as lost as they are as to what has happened to Michel. Diabolique is a movie I like to refer to as being quietly brilliant, as the story is strong enough to keep you enthralled and doesn't need a lot of frills or fuss to make it intriguing. 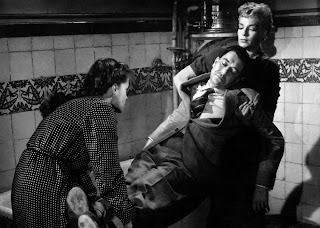 Vera Clouzot is breathtaking as Christina and expertly plays her as both meek and sickly, but also as woman who has had enough and will do what needs to be done for herself and others. Under the control of Nicole, Christina finds her strength, even if her morals haunt her throughout the ordeal. Simone Signoret craftily portrays Nicole, the brains behind the operation, as strong and confident but not one to take any crap from anybody. As the audience finds out later on, she's the kind to hug you with a knife in her hand, if you know what I mean. Paul Meurisse is slimy and mean as Michel, and some of his scenes of him mistreating the women were quite risque for the time and were wonderfully played. The shot of him dead in the bathtub is classically creepy and made me gasp just because of how freaky he looked. All they needed to do was give him scary, dead eyes and place his wet hair just so and they had one fantastic image that will be in my memory forever. 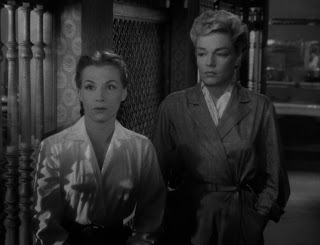 What made this twist so great was that throughout the whole movie, you're thinking of all these possible scenarios for why his body went missing and who else could be involved. Literally, almost every idea went through my head - except for the most obvious one. So subtle, so genius. Granted, it was all set up so perfectly that you (hopefully) would have never thought that Michel was still alive. We saw Nicole drown him in the bathtub; we saw his dead body in the bathtub; we saw his dead body in the wicker trunk. Christina's worsening heart condition is also set up wonderfully. It's not that cool that she had to die, but she seriously has one of the best deaths in movie history. Ever. To be literally scared to death and do it so beautifully, and in a way that scares the shit out of the audience as well, is an awesome way to go, in my book.

(I do strangely feel the need to mention the similar, but more funny and less scary, death from Child's Play 3. Not nearly done as well, but it makes me laugh to think of it.)

My goodness, I am in love with Diabolique. It is just such a tight, successful mystery and noir that had me completely entranced. A new favorite has been born!

Posted by Michele (TheGirlWhoLovesHorror) at 7:08 AM

Labels: black and white, Catching Up On The Classics, Diabolique, noir