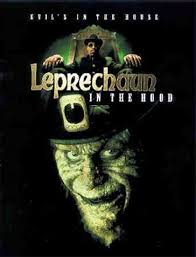 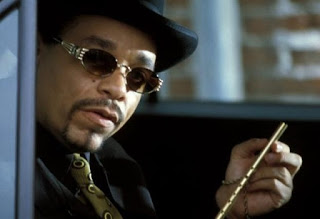 The movie starts out in the obvious 1970s (afros and platforms for the win!) as Ice-T and a crony follow a map to the leprechaun's gold, but the only thing Ice-T wants is the magical flute. Years later, Ice-T has the leprechaun imprisoned in his statue state, and a group of wanna-be rappers accidentally unleash the terror when they break into his office and remove his necklace. Pot-smoking and rapping hijinks ensue.

Truthfully, I kinda dug this installment quite a bit, because of the cool character choices and despite the stylistic flaws. For one, I loved our three main guys - Postmaster P, Stray Bullet, and Butch. They are so completely lovable, guys, and I liked the little twist that they put on their characters by making them rappers who want to put out a positive message, and that they are not serious gangsters. They're good guys and they're smart guys, and they have cute relationships with the other people in their neighborhood, like Miss Fontaine the transvestite and Chow the pawn shop owner. Ice-T is the former pimp turned hip-hop producer Mack Daddy and he plays that role just it sounds. It kind of sucked because I turned on a Law and Order: SVU marathon right after watching Leprechaun 5, and I've always loved Ice-T on that show, but I don't think I can ever watch it the same way again. 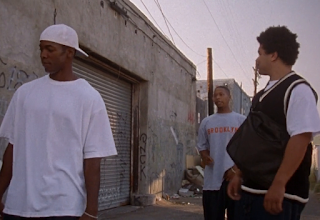 A cool thing that they did with the story here again with this movie was to introduce something new so that the whole movie would not just be the leprechaun chasing after these guys because they stole his gold. The flute that Mack Daddy stole in the beginning is a magical flute that hypnotizes people and makes them think the person with the flute is more talented than they really are or something. It's obviously helped him with his success, and the boys discover its power too. Really, they are so cute: All the boys want is to get their rap career off the ground and win this contest in Las Vegas. So anyway, you have both Mack Daddy and the leprechaun coming after them for the flute, and all the moral quandaries and selfishness and bullshit that they have to go through is kind of the incentive for the whole movie. 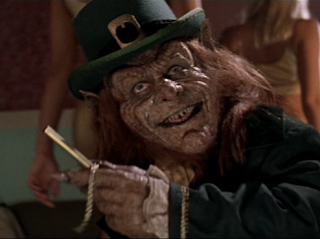 I think what surprised me the most was how freaking serious Leprechaun 5 gets at times. The tone is often completely different from what you would think it would be from a movie about the leprechaun dealing with pimps and rappers. The dialogue goes along with the campy nature of the movie, with more "fuck"s than I could count, and some of the situations, but there is something off about the whole way the movie presents itself. I think it's really the music and the editing that throws things off. There are some odd editing choices in parts where scenes just kind of end or fade out at weird times, like they didn't know how to finish the scene or something. The movie is really slow, and probably would have played out a lot better if it was tighter and faster. Adding to the serious tone, Warwick Davis is actually pretty freaky sometimes. A couple of times, he would give these facial expressions that were way more sinister than he's been before. 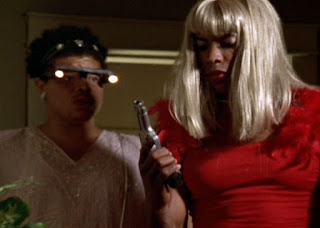 But of course, this wouldn't be a Leprechaun movie if there wasn't some crazy shit in it. The kills are pretty meh, but I was happy to see the leprechaun continue his obsession with fingers by ripping off one of Mack Daddy's fingers to take his gold ring. There was only one really good kill where the leprechaun blows a big hole through a guy's body. As for the weird stuff, they include the whole thing with Miss Fontaine, who is the only person in the series who sees the leprechaun and her first impression is to... want to fuck him? Whuh? There's a funny rap performance in a church where Coolio randomly walks in; there's the zombie flygirls with glowing green eyes; and there's the part where Post and Butch have to dress in drag in order to infiltrate the leprechaun's pad (which is also a weirdly serious scene). All this stuff is funny, but again, it would have played out a lot more effectively if the tone of the movie had been in the right place.

So this was a different experience than I thought I was going to get with Leprechaun in the Hood, but I don't know - it worked for me on some level. The movie is totally scatterbrained tonally, but I really like the main characters and that gets a big plus.
Posted by Michele (TheGirlWhoLovesHorror) at 1:43 PM 2 comments: