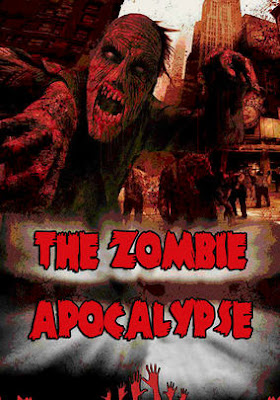 Oh, dear goodness, why? Why why why why WHY? Why does every idiot with ten dollars think that the fastest and easiest way to making a horror movie is with zombies? Seriously, look up a good majority of the shit independent horror movies out there and I'm thinking that most of them will be about zombies. Movies like this Project Terrible-appropriate poopfest - given to me by Robert over at Gaming Creatively - just get me all kinds of pissed off because they have turned the zombie into the horror movie monster whore. And I don't like it.

When the zombie apocalypse breaks out in Michigan, two college friends at a bar meet up with zombie killer Miller and goth girl Raven as they fight to find a safe place. Meanwhile, Miller's connection to the outbreak comes back to haunt him when he's hunted down by his former protege. 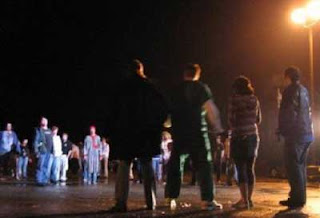 Gosh, I made that synopsis sound way more interesting than the movie actually is. The Zombie Apocalypse (terrible, terrible title BTW) is simply the same old recycled bullcrap from every other zombie movie that came before it. The characters are complete half-wits and completely uninteresting, unbelievable and unlikable. The zombies are plain old generic and stupid, and there is no real explanation for how they came to be, except that Miller's wife had something to do with creating them. Somehow. I don't really care.

The two college guys Tom and Mark are, aside from being not hot at all, the most pointless and boring characters ever created. Not that anyone in this movie has any kind of personality really. Raven (real name: Jennifer) is a cliched goth chick who in her first scene gets fired from the video store she works at. Of course she likes horror movies, and it makes us all look bad. Miller is the worst of the bunch - he's a Tom Savini-wannabe with his stupid long hair, beard, and black motorcycle jacket, wielding a machete. He also tries to pull off this really forced and fake sounding gravelly voice and speech pattern, trying to make himself sound harsher and tougher than he really is. 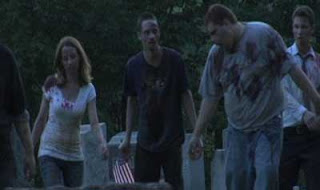 The gore work is almost not even worth talking about. A few of the zombies got some special makeup treatment, but otherwise they are all just shambling extras with dark eye makeup and a few drips of blood. The action and attack sequences are poorly choreographed, and even more poorly performed by the actors. The zombies are almost always killed out of frame with the exception of about five throughout the whole movie, so there's no money to be spent on effects work there. I must say that they are definitely better actors than any of the main cast because they don't have to speak or really do much of anything. Way more interesting to watch than Tom, Mark, Raven, or Miller. Sorry, but the truth hurts.

I thought at the beginning of the movie that the music was actually the best part of the whole thing, as some scenes have really nice scores to accompany them. Then later, as the action picks up, the music unfortunately gets worse. It goes all bad rock 'n' roll, bringing the tone of the movie straight on over to the campy and ridiculous side. Of course, it was already well on its way there anyway. The only humor at the beginning also was just from the bad acting, but then again, later they try to intentionally make the movie humorous. And that almost never works out well for movies like The Zombie Apocalypse. I can't even count the number of times I scoffed or rolled my eyes while watching this - every lame line, every stupid action, every contorted facial expression. Such a waste of celluloid.

And that's really about it. I have nothing else to say, positive or negative. The Zombie Apocalypse is a movie that no one, beyond a few curious Netflixers, will probably ever see and that is most definitely a good thing. I finished watching it less than two hours ago, then went back to watching Mad Men and have now completely forgotten it. So, until next Project Terrible, I'm done! Other rounds have been much worse - TRUST ME - so I'm feeling lucky with what I got this time. I realize that by saying that Alec especially will probably feel the need to really punish me next time... oh crap...

Posted by Michele (TheGirlWhoLovesHorror) at 8:08 PM