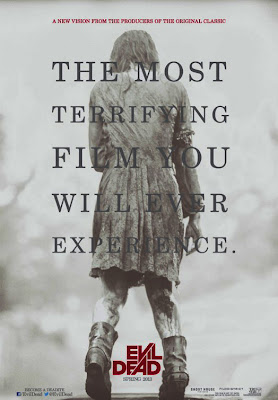 No (big) spoilers, I promise.

Evil Dead is here, like it or not, and it brings with it a bloody good time to be had by fans and non-fans alike. It's not right to just ask if this is a good remake or not, but is perhaps better to ask if this is a worthy remake or not. Evil Dead is in a league of its own to horror fans and it is a classic not to be fucked with. And though the remake has its weak points here and there, the bulk of the movie is a lot of fun to watch, with buckets of blood being the icing on the cake. 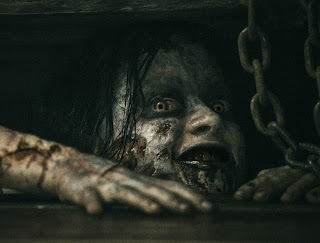 So instead of just five friends going to a remote cabin in the woods for a weekend, this one tries to be all serious and stuff by having it be about friends who take this one girl to a remote cabin in the woods to dry her out from her drug habit. It sounds like a terrible idea to me even without the demon possession, but whatever. They find the Book of the Dead, they read from it, and they spend the rest of the movie covered in blood. It's a good formula.

Now as for the characters... um, I don't care. Other reviewers have commented on how happy they were about the more developed characterization for our group of five innocents, and the back story for why the kids were at the cabin in the first place. Seriously? Who is really going to give a crap about Mia's drug addiction or her and David's dead mother when the blood starts flowing? This is Evil Dead, and therefore, I don't give a fuck. I will say though that Mia and David are the only ones who are given sufficient background (totally irrelevant to demon possession though it may be); Olivia was very cool; Eric - who is obviously supposed to be the "Scott" character - needs a haircut and a set of balls; and poor Natalie is just fodder for the demons. Seriously, she has one or two lines at the beginning of the movie and then when she shows up again about 20 minutes later, I was like, "Where'd this chick come from?" 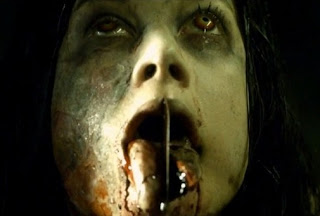 If there is one thing that I love and respect from horror films it is the way that some are not afraid to really fuck up the main characters. Not just have them running around the woods screaming and occasionally falling down or getting hit or something, but really, physically fuck them up. Evil Dead comes through for fans beautifully in that regard, and I don't think I'm alone in saying that I wouldn't have stood for anything less. Scalding hot showers, severed limbs, nail gun shootings, crowbar beatings, plus a few disturbing instances of demon-possessed self-mutilation are just some of the gags Evil Dead has in store for audiences and will (hopefully) make the gorehounds happy like it did me. 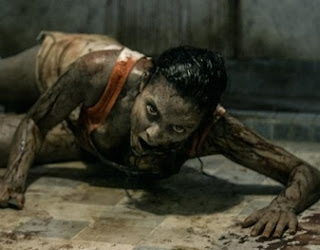 And gore is really the name of the game for this movie. Again, this is Evil freaking Dead. I want to see some blood a-sprayin' and I want to see it NOW. And believe it or not, I almost got more blood than I asked for, something I never thought I'd say.  The last fifteen or so minutes are by far the best and can only be described as a goregasm. Or bloodgasm. It literally rains blood and there is quite awesome use of a chainsaw that had me smiling ear to ear and clapping my hands (silently, though, because I was in a movie theater). Couldn't have made me happier. However... okay, two different people lose their hands in this movie. Was I the only one to have her dreams crushed when the hands did not suddenly come to life and attack their owners? I guess that wouldn't have been right for this remake because that's of course from Evil Dead 2, but I really think they were just teasing us. Fuckers. Also on that note, I was a bit disappointed that the gore gags were not as light-hearted as ones we've come to know and love from Evil Dead. Everything was really well done with practical effects (THANK YOU, THANK YOU for not using CGI), so well done that even the most insane effects were more disturbing than campy. Your own taste preference will determine whether that is a good thing or bad thing. 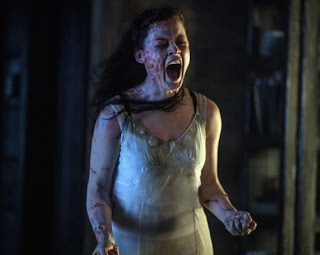 Know what my first thought was when the movie started playing? "I hope they do a tree rape scene." I was really looking forward to seeing how they would do that. Instead of a really painful looking tree branch slamming into the girl's... you know... they have this black, worm-like branch thing come out of another girl's mouth and go slithering up Mia's leg, thus starting her possession. It's a good scene but sadly one of the only scenes from the original that they attempt to recreate.

Of course I watched this movie to see what their version of a re-imaging of the original film was but I couldn't help but hope for at least some nods to the classic, even if only real fans would have caught them. The first two were quite easy to pick up on: Mia sitting on Sam Raimi's Delta 88, wearing a Michigan State sweatshirt. There are a few other easter egg goodies spread throughout, but like another blogger said, it's more fun to find them on your own so I'll leave it at that.

Though the poster boasts that Evil Dead is "the most terrifying film you will ever experience," it's really not. I think that was just supposed to be a riff on the original's "ultimate experience in grueling terror" tagline. What the remake does offer, however, is some thinly drawn characters getting themselves all kinds of fucked up in the woods. And lots of blood. And blood vomit. And electric bread knives. See it and enjoy, and then go home and watch all the Evil Dead movies in a row. Trust me, it makes for an awesome day.

Lastly, I will say that staying for the credits is a very good idea.

Posted by Michele (TheGirlWhoLovesHorror) at 7:27 AM