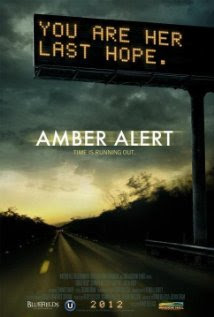 Most of me wants to say that Amber Alert is not a good movie. It has more than a few problems in terms of characterization and story, and confusion and unbelievability come into play many, many times. However, I really love the basic story that Amber Alert presents. It's a great idea (that is actually not all that current anymore but it still works) and is something that hasn't been done before. So let's dissect this little movie a bit and see what we're working with. 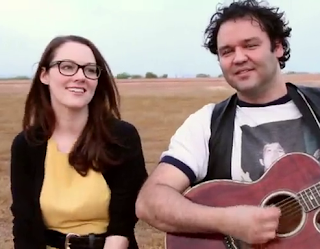 Samantha and Nate are life-long best friends, making an audition video for a reality TV show. When they spot the car listed on an Amber Alert sign on the highway, they decide to follow it, becoming ever more suspicious of the car's owner. Sam refuses to give up on following the car, and the more involved they get, the more dangerous it becomes for them.

I like the idea of the movie because it explores one of those "what if" questions that I've never really thought that much about. We all know about Amber Alerts and some of us have actually seen them. What if you did see a car on an Amber Alert sign? What if you knew that there was a child in danger inside that car? What would you do? It's an interesting question to ask and one that I was excited to see explored. 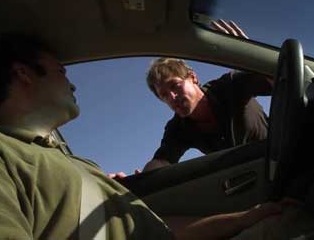 In the first few scenes where Nate and Sam are at different locations around their hometown and being all cutesy for their audition tape, you like them. It's easy to figure them out - she's the kinda-purty, kinda-nerdy chick, and he's the best friend who has been in love with her for years, with the feeling not being reciprocated. Obviously. So that's endearing, sort of. However, once they get in the car and spot the ominous gray Honda, you soon realize that these are two of the most annoying people in the world. They almost immediately start arguing about what to do about the situation and thus begins an agonizing half hour or so of listening to two people shouting and yelling over and on top of one another CONSTANTLY. Not a good time.

To be fair, this is actually pretty believable. Two people that have known each other all their lives have probably had a lot of fights and it's just the way they communicate sometimes, I get that. The dialogue isn't that bad either, and often sounds very natural as the characters fumble their lines and stutter and what not. It just really needed to be toned down in this movie to keep Sam and Nate from becoming the unnerving assholes that they become. The audience is supposed to be on their side and supporting them all the way, not wanting them to get into a head-on collision with the gray Honda just to shut them up. 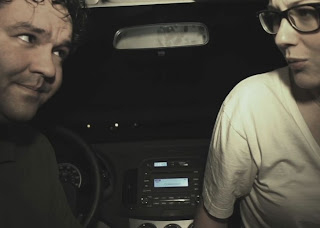 It's also hard to be supportive of the characters when they - but really more specifically, Sam - keep making the stupidest decisions ever. At first it's cool as they just leisurely follow the guy while informing the police of his whereabouts. There's a great scene where the guy catches them following him and gets them to pull off the road. He comes to their car window and they actually talk to the guy for a little while, with him putting on the charm and telling a sob story about having a psycho ex-wife and how the little girl in his is his daughter. I thought that the filmmakers would make him be ths faceless monster for most of the movie and not really reveal him until the end, so this was a nice, tense little scene that I liked a lot. Sam does make one smart decision during their ordeal, which is to throw her wireless microphone into the backseat of the car. This allows the found footage technique to continue with some purpose, as they can listen to what the abductor says to the girl and realize that she really is in danger. 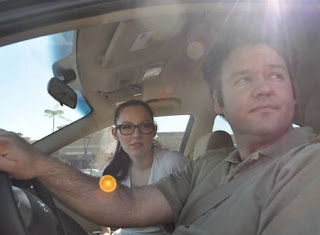 A couple other problems: the ridiculous lack of police presence and the mostly faceless and voiceless camera person, Sam's little brother Caleb. As to the latter, Caleb is seen briefly at the beginning of the film and has a few lines here and there throughout, but he is rarely involved in Sam and Nate's conversations and they hardly speak to him except to tell him to get down so the abductor doesn't see that he's holding a camera. When the group really gets in deep with this guy, going so far as to actually going inside his house, it is ridiculous to think that Sam would actually put her little brother - who looks to be barely a teenager - in such a dangerous situation. She really seems to have no concern at all for him. As for the first problem I mentioned, the lack of police response, it's complete and utter bullshit. They speak to one cop in person the whole time and that is it. No more police anywhere. The most ridiculous part is when Sam is informed by the police that the Amber Alert has been called off. Um, what? We know by the end that this guy really did abduct this girl and she was definitely not his daughter, and the police had witnesses to a little girl in the car - so why the hell would the alert be called off? It wouldn't, that's right. Stupid. 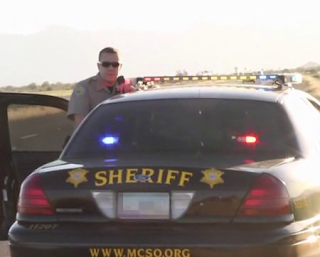 All that being said, though, Amber Alert was still effective to me. I found myself really getting into the story, wondering which way it was going to turn and just how dark they would go. Sure, I threw my hands up a lot in annoyance and anger, and yelled at the screen plenty of times, but this movie did something to me. The film looks good and actually feels like a real movie and an amateur one at the same time (to keep the found footage believable), and though the suspense doesn't really kick in until the last twenty minutes, I think it's mostly worth the wait. The ending is shocking and a bit heartbreaking as well, and they do a really good job of laying the heartbreak on thick with the last little scene of Nate and Sam.

I think fans of found footage should give Amber Alert a look because it has a few clever ways of making the technique work for its story. A little thing like logic doesn't play a very big role in the movie but the main idea of the story is a good one to explore. Don't let the annoying characters make you shut the movie off after 20 minutes - I still say to give Amber Alert a chance, even though most reviews tell me that a good majority of viewers will hate it.

Posted by Michele (TheGirlWhoLovesHorror) at 7:39 PM