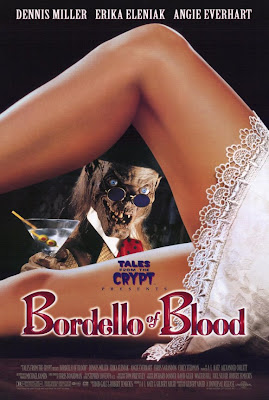 Netflix: Hey, Michele. What do you feel like watching today?

Michele: Hard to... concentrate... First horror convention... only 10 days away... Norman Reedus... Chris Sarandon... Heather Langenkamp... Tom Savini... All are so close to me now... Please give me a fun horror movie to... distract me!

Netflix: Ever seen Bordello of Blood? 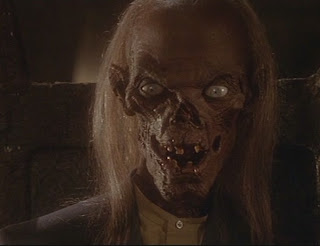 It worked! So, so sorry, guys, but this whole convention thing has gotten me into quite a tizzy as the event draws ever nearer. Of course, Bordello of Blood turned out not to be able to distract me that much, because Netflix failed to inform me that Chris Sarandon is in this movie, too. Teasing motherfucker. Will meet Chris... in 10 days... Jerry Dandridge... Prince Humperdinck... Cannot wait... any longer! ... Okay, I'm back. So anyway - loved Bordello of Blood! As the second full length feature based on the HBO series, Bordello of Blood is a joyous comedy and gorefest with a gungho cast, a fun story, and some really great effects gags.

The story here is that after being awakened from the dead, the mother of all vampires Lilith is back in business, running a house of ill repute secreted away inside a mortuary. Private investigator Rafe Guttman threatens her plans when he visits the bordello looking for the missing brother of a client. 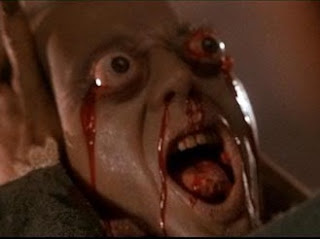 Dennis Miller headlines this show as Rafe - and he plays the role just like he does every other role I've seen him in. He's witty and sarcastic with a dry-as-a-desert sense of humor that you think would get old after a while here. Fortunately, it does not. Miller is hilarious the whole way through, his character's cavalier attitude making the whole situation of vampire prostitutes just as funny as it should be. Angie Everheart as Lilith is also beyond awesome in her role. She is a gore-geous woman who just seems to be having a good time playing the baddest bad bitch in this movie. Yes, every word out of her mouth is some kind of pun or double entendre but she manages to pull (most of) them off without sounding (too) cheesy. Alright, it was often quite cheesy but I didn't mind it so much. Everheart has her comedic moments here and there too, so give her points for that. Erika Eleniak, Corey Feldman, and Prince Humperdinck also all give hilarious performances, though the guy playing the funeral home guy, McCutcheon, was a big favorite of mine. 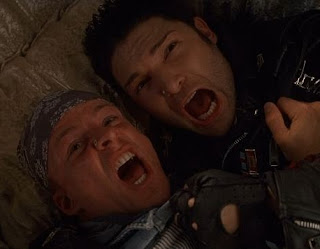 Right at the beginning of the movie, we are given a wonderful taste of the awesome comedic gore gags to come. Treasure hunter Vincent brings Lilith's dried up corpse back to life by reconnecting the four pieces of her heart and putting it back inside her. As soon as she wakes up, she's hungry for blood and Vincent feeds her his tour guides. She punches her fist through one guy's chest and rips out his heart; squishes another guy's head with her bare hands until his eyes pop out; and does something probably pretty nasty with her tongue to the last guy, even though we don't see it. Later on in the film, there is a cool sunlight-explodes-vampire scene (which includes a weird cameo from Whoopi Goldberg for some reason) and another great death involving Lilith's extendable tongue, another man's heart, and some serious French kissing. Also - holy water squirt guns. Always fun. And Prince Humperdinck looks pretty awesome with one. 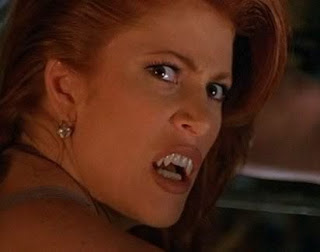 Oh, what else to say? Love the stuff with the Cryptkeeper and William Sadler-mummy at the movie's bookends - the Cryptkeeper of course has the best one-liners in the whole thing because, well, delivering extremely bad puns with a delicious cackle is why we all love the Cryptkeeper so much. "She's knows that the best way to a man's heart - is through his rib cage!" So, so bad and yet so awesome at the same time. I also loved the perfect Tales from the Crypt ending that I sadly did not see coming but totally should have. I see now that many critics and reviewers did not like Bordello of Blood so much and that's just bullcrap. No, it's not scary nor is it even a particularly good horror flick but I guess you have to see it for what it is, and I think genre fans are the ones who really get a kick out of it. It's Tales from the Crypt. You shouldn't be expecting any highbrow art in the first place because you won't get it. What you will get, though, is a campy good time, a movie with a real sense of humor about itself that easily makes fun of its own ridiculous situations.

You also have Prince Humperdinck as an Evangelical preacher playing an electric guitar. Seriously, what the hell else do you want from a movie?

Posted by Michele (TheGirlWhoLovesHorror) at 2:35 PM