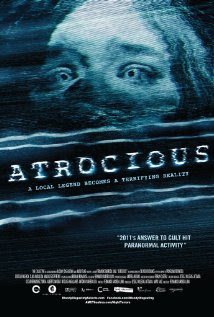 'Tis a small Project Terrible round this time, friends. Only me, Alec, and Robert jumped on board this time - which is actually good for me because that means I only have two movies to do this month, and I know I'm going to be all kinds of crazy and distracted once my trip to my first horror convention gets closer (18 days now!). So first up in this round is Alec's pick for me, a Spanish found footage movie with a most appropriate title - Atrocious. Seriously, they should've seen this coming. 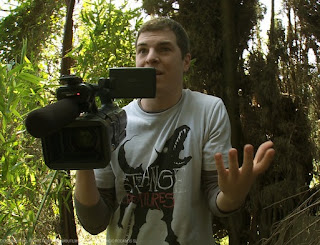 Brother and sister pair Cristian and July (actually pronounced like "Julie") have a little hobby of investigating local urban legends for a web show. Or something. So they take their cameras along with them to their family's old abandoned house out somewhere for the Easter holiday because the area is said to be haunted by a little girl named Melinda who got lost in the woods.

So really, if you're going to call your movie "Atrocious," it might be a good idea to have the movie not actually be atrocious, if only just to avoid the inevitable ridicule. I mean, technically it's not really that bad of a movie, but it is pretty boring and repetitive, and it has one very lame twist ending that makes no sense and has no relation to the rest of the movie. It's the story that is the biggest problem in Atrocious - you know, the fact that it doesn't actually have one. Story is important in movies, people. It's kind of the reason behind the whole medium. 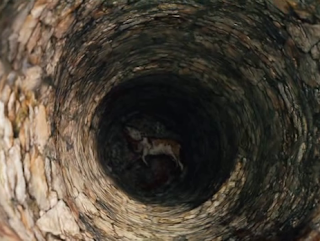 These two yahoos, Cristian and July, walk around with their (actually pretty awesome) cameras, filming stuff like their basement with all their old toys and getting an interview about Melinda the ghost girl from family friend Carlos. For urban legend investigators, they do a really sucky job and no real investigating at all. Eventually they go out to explore the labyrinth on their property. They film things like the gate that leads to the labryinth and the trees and keep staying that stuff is all "spooky" and "creepy" when it really is not at all. Get used to this very boring labyrinth, viewers, because you will be seeing a lot of it as the film goes on. And you will learn to hate it. 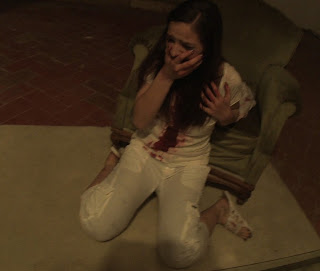 Still no story really. Finally, something sort of exciting happens when the family dog goes missing and Cristian and July of course take their cameras into the labyrinth, where they find him dead at the bottom of a well. Okay, I lied. That's not that exciting. Also, since both characters are carrying cameras, things can get awfully confusing when they switch from one to the other and the audience is disoriented for a second as they try to figure out where they are and who they are following. There are many, many minutes of one of them just walking around that damn labyrinth with absolutely nothing happening. I did actually pay very close attention to these parts, though, thinking that maybe the filmmakers would sneakily throw something "spooky" in the background or something. But they never did. Just more goshdarn trees.

Then somebody else goes missing. This time it's little brother Jose, and the mom goes running off into the labyrinth at night to find him, with Cristian and July following. With their cameras of course. Camera at night? You know what this means - night vision. I've never hated night vision so much in my life. After a while, it's just Cristian by himself and I had to suffer through a good five or six minutes of watching the labyrinth trees in green night vision as Cristian ran around, panting and crying, and nothing happened. 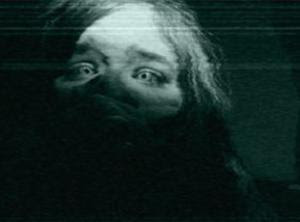 They finally leave the maze and go back to the house after Cristian finds July tied up to the gazebo, all bloodied. There are a few semi-good scare moments as it becomes obvious that there's somebody (or something) trying to kill them - especially when a charred corpse falls out of the fireplace, an axe comes crashing through the door, and Cristian finds only bloody smears where July was hiding. Soooo, it's not supernatural anymore? Nope, the whole Melinda story was apparently just a red herring and is completely dropped for an incredibly lame twist.

Do you care if I tell you what it is? Well, here it goes anyway: it was the mother. She used to be in the nuthouse because she suffered from postpartum psychosis or some shit and had actually killed one of her other babies. Which in turn begs several questions. How is it that nobody else in the family seemed to know about this, and why in the hell would anybody leave her three other children in her care after that? The video footage they show at the end of her being interviewed at the nuthouse clearly show that she is batshit. And they think she was just cured of that so easily? Argh, so stupid. The real problem is that there were almost no clues at all that this might be the ending to the movie. Yes, I did notice one time that she sort of had a little crazy look on her face, but that was it!

Atrocious proves that even though I loves me some found footage goodness, not everybody can get it right. This movie has no suspense, no story, no character development, and an ending that will piss you off. Had they not spent so much time in that fucking labyrinth and actually worked on the other stuff more, Atrocious might have been a cool movie. Or at least a tolerable one. As it is, though, Atrocious is a big 'ol failure. An atrocious failure.

Posted by Michele (TheGirlWhoLovesHorror) at 3:54 PM