Living on the Hellmouth with hordes of the undead and other monsters and demons, every day can seem like Halloween in the Buffyverse. But in seven seasons of the show, there have only been three episodes that specifically take place on Halloween. Two of them are pretty good, one... maybe not so much. 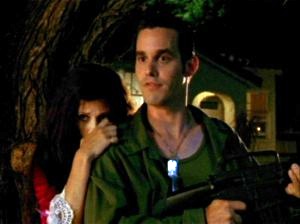 The first season of Buffy was a mid-season replacement for another show, so no room for a special Halloween episode there. But that was quickly rectified the next season in the episode "Halloween," which is sadly overlooked as a standout show.

Buffy, Willow and Xander all go to a new costume shop to purchase their various Halloween attire, ready for a fun night taking kids trick-or-treating because Halloween is supposed to be a quiet night for the undead. However, the owner of the costume shop, Ethan Rayne, has a love for chaos and casts a spell that causes everyone who bought his costumes to actually turn into whatever they are dressed up as. Willow becomes a ghost (and a sexy one at that), Xander becomes a soldier, and Buffy becomes a flighty 18th century girl; all of them losing the memories of who they really are. 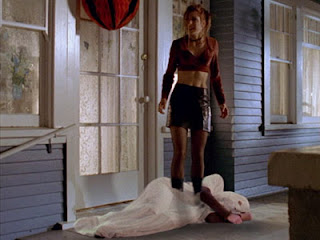 This is a fantastic idea for a Halloween story: what if you could actually become your Halloween costume, when you get to dress up as anything you want? Now, this episode only shows the little devils and demons that the kids turn into but what about the girls who dressed up as princesses or the boys who donned Superman's outfit? Would the kid really have become Superman?! It's not really relevant to this story, but it's what always goes through my mind when I watch the episode.

"Halloween" is not only a genius concept episode, it's pretty freaking funny too (like almost all the episodes on the show). I really love Alyson Hannigan and Charisma Carpenter's performances in this, as Willow and Cordelia respectively. Willow is funny because she has to spend the whole time very much out of her comfort zone in a sexy outfit, and Cordelia's hilarity comes from her inability to believe that Angel is actually a vampire.

All in all, "Halloween" is a pretty solid episode in the world of Buffy, and it also gets props for the introduction of Ethan Rayne, an old "friend" of Giles who comes back to cause problems in two subsequent episodes. 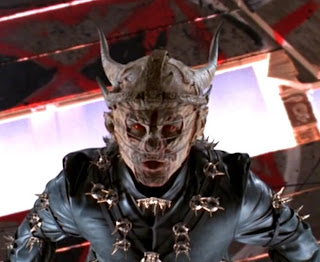 Most of the fourth season of Buffy sucks. That's harsh, I know, but it's a commonly held belief amongst Buffy fans that season 4 as a whole is just not up to par with the rest of the show. The season does boast some pretty good stand alone episodes, with "Fear, Itself" being a fun little throwback to the lighter episodes of seasons past.
So in this episode, Buffy's feeling down after being ditched by Jerky Parker; Xander and Anya's relationship is slowly budding; Willow and Buffy are pulling away from each other; and Oz is still having problems dealing with his status as a werewolf. They all go to a frat party on Halloween night where, as luck would have it, the frat boys have inadvertently summoned a fear demon that keeps them all trapped inside the house. 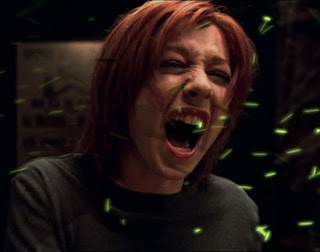 This episode is nothing special, but it's not all that bad either. It helps advance the story arc of the main characters (a little) and is presented as a kind of haunted house tale with a different edge. The fear demon, Gachnar, separates the friends from each other in the house and taunts and torments them in different ways, manifesting their deepest fears about themselves.
There are some nice gags in this episode that would be more than welcome in any haunted house movie, just for the creep factor: the missing doorway and stairs; the Halloween decorations that come to life and then suddenly turn back again; and the disoriented feeling from not being able to find a way out.
Probably the best part about this episode - other than the appearance and destruction of wee little Gachnar and Giles's final line - is that it starts a hilarious in-joke about how Anya, a former wrathful vengeance demon, is terrified of bunnies. Also, Giles with a chain saw is kinda sexy.
"All the Way"
Season 6, Episode 6 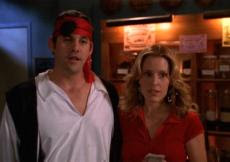 This episode is not so much my favorite because although it takes place on Halloween, the point of the episode is not focused on Halloween itself. I only started to like Dawn as a character in season 7, when she became way less whiny and far more useful, and "All the Way" is most definitely a "Dawn episode."

So it's Halloween, obviously, and while the rest of the gang has an impromptu party to celebrate Xander and Anya's engagement, Dawn sneaks off with a friend - the as yet unseen girl known as Janice - to go galavanting about town like kids do on Halloween. They meet up with two dudes who turn out to be vampires who then want to turn the girls into vampires.

This episode also sets up a fun little side story of the kids getting involved with the crazy old man down the street but that's almost immediately disposed of when the boy vamps are revealed to be the real threat.  And they are so lame. 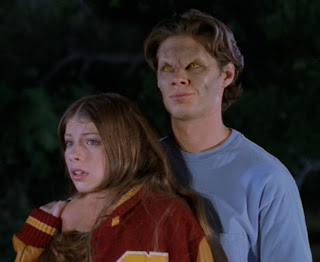 I mean, I guess I just don't really get the point of this episode and what it is supposed to say about Dawn's character. I'm thinking it's about how she finally finds a guy that she likes and who likes her back and that makes her feel special in a world where she is fairly useless compared to the people around her. However, "All the Way" mostly helps progress the stories of Willow and Tara and Willow's overuse of magic, and also Xander's fear of his impending marriage to Anya, more than any story about Dawn. It also gives more hints to the sexual tension between Buffy and Spike.

Highlights of the episode, though, include the cute little girl dressed as a witch in the Magic Box (credited as "Witchy Poo"), Giles finally getting to show some bad ass vampire slayage, and the performance of the old guy at the beginning. Maybe if he had been the real villain of the episode, things would have been a lot more interesting. But this one is kind of a dud for me.
Posted by Michele (TheGirlWhoLovesHorror) at 6:06 AM