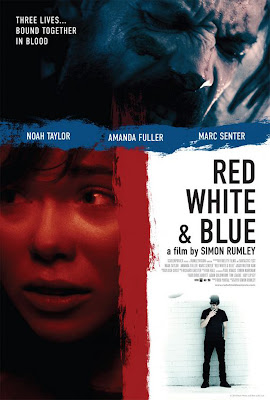 Although not technically a horror movie, Red White and Blue is no doubt a horrific look at the dangers of promiscuity and the lengths that desperate people will go when pushed too far. 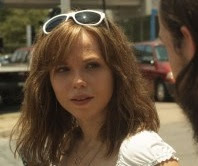 Erica is a lonely girl who sleeps with a different guy almost every night. Nate is a veteran of Iraq with a disturbing past and a mysterious present. The two begin an unlikely friendship with the potential for more. But their happy start at life is soon turned upside down when one of Erica's ex-bed mates reenters the picture with a startling discovery.

For the first third of the movie, I admit that I was a little annoyed by it but still interested in the story. The annoying thing comes from the ADD editing, when there is a two second shot of one scene, then four second shot of another scene, then maybe another three seconds of a different scene. It seemed a bit disjointed and for the longest time the audience is unaware of just where the story is going.

But the movie is more of a character study about these three people rather than a straight up narrative. Erica seems unfeeling and cold, not wanting friends and not wanting anybody to get too close to her. There's more to her than just being promiscuous and kind of bitchy, as we find out later. Frankie at first seems like a bit of a poser/loser - he's in a band with some friends (and they all have sex with Erica one night) and wears the most ridiculous earrings I've ever seen that look like big feathers. But then he turns out to be not such a bad guy maybe because he supports his mom while she's battling cancer, even donating his own blood to her on a regular basis. His actions against Erica after finding out she gave him HIV are no doubt abhorrent and brutal, but they are still slightly understandable, as it is just one more thing in his life that is suddenly spiraling out of control. 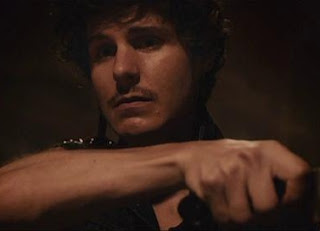 Nate, however, is the biggest mystery, and in fact remains quite a mystery until the end. During one of his first real conversations with Erica, he reveals out of the blue that he used to torture animals as a child. He's also recently been honorably discharged from the army, and - get this - been offered a job with the CIA. Although his actions in the last third of the movie support this, it's hard to believe at first based on his appearance and mannerisms.

The filmmaking style is definitely indicative of someone with an independent eye, and though the camera gets shaky and the lighting is a little off, it still looks good and matches the mood of the film. It's haphazard and desperate, just like our characters, especially Frankie. The colors are muted and dull, which is usually the case in dramas such as this when filmmakers want to convey a standard "non-happy" atmosphere.

Usually, I'd make a big deal about the violence toward the film's conclusion - when the real story is revealed - but it's not what affected me most about the movie or what is the most memorable. Although what happens is horrifyingly brutal and bloody, the motive and feeling behind the acts is what will get to you emotionally. I gotta say, however, that last bit of revenge really floored me in its nastiness - very intense! 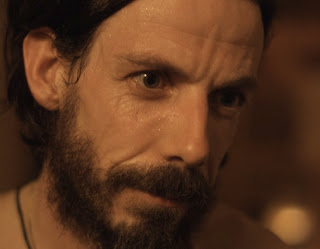 Much can be interpreted about the supposed meaning of the film's title, Red White and Blue, but I'll be damned if I can think of something that fits into how I see the movie. Does it have something to do with a comment on America itself? Its predilection for violence and revenge? Or is it the symbolism of the colors themselves? The white for Erica's ruined innocence, the red for the violence and blood spilled, and the blue for the melancholy lives of our characters? Like I said, I'm not sure, but people seem to have different thoughts on the movie itself and the meaning of title, I guess they're all correct.

Red White and Blue may not be a film for everyone, but I think it you give it a chance, you'll find something really special here. And as for that big twist ending that's promised in the synopsis? There isn't one. It's just a revelation of unseen events, but it does make the ending even more heartbreaking. I realize I didn't say much here on what the movie is about, but with this one I think it's best to learn the characters and the story the way the movie reveals it to you.

Sidenote: Is it possible to work a Buffy the Vampire Slayer reference into this movie? Yes, it is! The main character Erica is played by Amanda Fuller, and it took me a little while to remember where I recognized her from, but I finally got it! She played Potential Slayer Eve in a season seven episode, where she was delightfully creepy. Just an FYI.
Posted by Michele (TheGirlWhoLovesHorror) at 7:18 PM