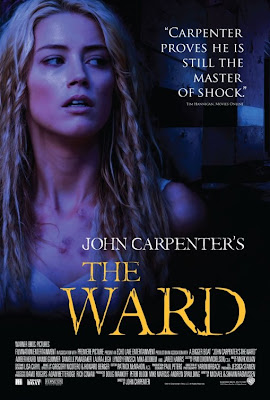 Haunted mental asylum. What could be a better setting for a horror film? You've got crazy people, you've got nasty and mean orderlies and nurses, you've got electroshock, and then, hell, why not throw in a freaking ghost! Is it possible to get this formula wrong? In the case of The Ward... yes. Yes, it is. 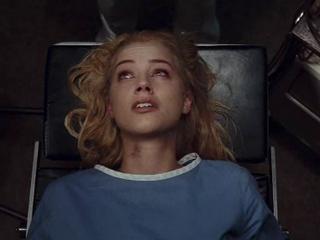 It's 1966 in a small town in Oregon, and after burning down an old farmhouse, a young woman named Kristen is taken to North Bend Psychiatric Hospital involuntarily. But things are not as they seem on the ward as Kristen soon begins to encounter the ghost of a girl who might have died in the hospital and the other patients on the ward start disappearing one by one.

The Ward didn't get a big release and as far as I can tell, it didn't really get that much attention. This being John Carpenter's first feature length film since 2001's Ghost of Mars, that surprises me. But while watching this movie, I gotta say that I couldn't even tell that Carpenter directed it. On the whole, the film is pretty run-of-the-mill and mediocre, and the ending is enough to put off pretty much everyone who sees it. I'm not saying that the film wasn't watchable - the acting was quite good and there's always the fun suspense of finding out the mystery behind the haunting. 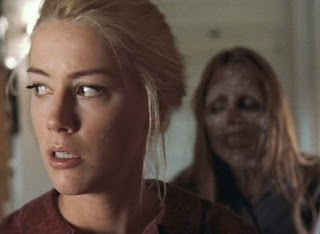 Newcomer Amber Heard plays the main role of Kristen. I quite like this little actress. She's beautiful and seems fearless in her acting. She also seems very natural which is greatly appreciated in a movie like this. Danielle Panabaker as Sarah was also a joy to watch, but I was most excited to see Mika Boorem as Alice. She is a true talent with a beautiful yet un-intimidating face and it's sad that I've only seen her in little bit parts like this.

The ghost lover in me was immensely disappointed here. The cliched scares were all wildly obvious and never got a jump out of me. The movie is perhaps not as haunted as I'd like it to be and Carpenter tries to give us some creepy visions of the ghost, but frankly, it was all stuff we've seen before. The only interesting part was the increasingly revealing vision of the little girl chained up in a basement.

And the ending. Like I said before, I'm sure this is the element that ruined the movie for most people, and I gotta say, I might be one of them. So with this movie we're promised some spooky ghost story and all, but that starts to come into question with some of the scenes involving the ghost. Sure, she looks all ghostly and dead and stuff, but the things she is able to do get weirder and weirder and definitely less ghost-like. She is able to physically touch people, murder them, and somehow Kristen is able to plunge an axe into her chest. Hmmm, something is amiss here. 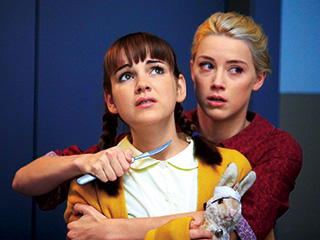 And why is this? SHE'S NOT A FREAKING GHOST. All the crap that has happened in the movie has happened inside Kristen's head. But - SHE'S NOT FREAKING KRISTEN. She is actually Alice Hudson, the woman who has supposedly been haunting the hospital for the whole movie, not wanting any of the other patients to leave and murders them instead. This is also not the case, as the other patients on the ward are the incarnations of Alice's multiple personalities. What?! What a crock of shit. This is exactly what was happening in Identity, a movie that is a terrible guilty pleasure of mine. I usually don't mind twist endings like this - in fact, I kind of love them - but it was just the fact that I'd seen something so similar in another movie that pissed me off.

The Ward is not a bad movie if you want to pass a few hours, but to me it was nothing special and not something I'm clamoring to see again any time soon.
Posted by Michele (TheGirlWhoLovesHorror) at 7:09 PM