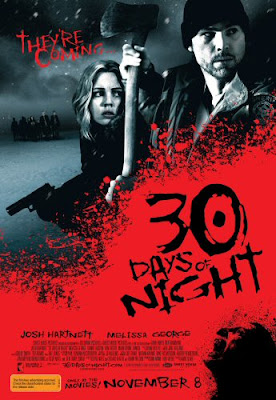 I avoided seeing 30 Days of Night for the longest time because, for some reason, I thought I would hate it. The concept always intrigued me but maybe it was the fact that Josh Hartnett was the star that turned me off initially. Don't judge a book by its cover or its starring actors, I guess, because 30 Days of Night was actually pretty darn good. 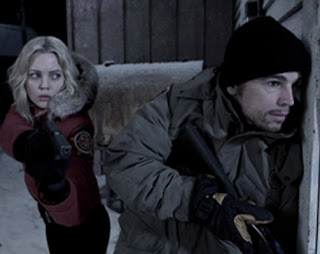 In this story taken from a graphic novel of the same name, the northernmost U.S. town of Barrow, Alaska undergoes a period of 30 days of total darkness in the winter. When this polar night begins, bloodthirsty vampires invade the town to feed on the populace. A small group of citizens, led by the town sheriff, try to survive the invasion by hiding out until the sun comes up again.
30 Days of Night is a slow burn with not as much action as you would expect. The tone of the movie is represented in the miserably cold atmosphere and the town's impending doom about being plunged into depressing darkness for a whole month (I thought polar night lasted longer than that in that area, but what do I know?). The strange man who arrives in town unexpectedly cuts off all ways of communication and the town essentially shuts down, so no one on the outside knows that anything is wrong and they can't call for help. I can't remember if it's explained why they can't just drive away, though. Is it because of the blizzard? And why would the airport freaking shut down for the month anyway just because it's dark? Planes fly at night all the time, morons, I don't see the problem. Anyway. 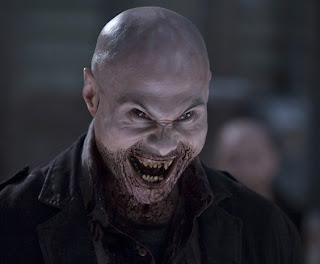 I don't know how big the town of Barrow really is, but it must be pretty good size for these people to be able to hide from the vampires for a month. The few people left alive hole up in some dude's attic for most of the time, where some of them understandably get a wild case of cabin fever insanity. There's also the underlying tension between Josh Hartnett's Eben and his wife Stella (Melissa George) who have unexplained problems that you know will be solved by the end of the movie. Ha! But even that cliche is turned on its head in the film's amazing conclusion, which I'll talk more about in a bit.
The vampires here are just how like them in anything outside of a Buffy the Vampire Slayer episode. They don't look too unnaturally monstrous, but only like pale people with sharp, sharp teeth. They speak in their own strange language and are basically your typical evil, rip-you-to-pieces bloodsuckers. Actually, a couple of them were kind of hot, but that's beside the point. The point is that these vampires are awesome and the only negative about them is that they are not given nearly enough screen time for my liking. 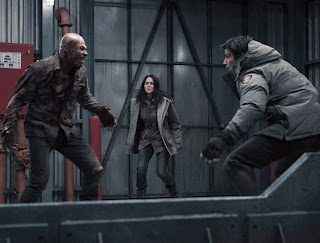 And although the action having to do with these awesome vampires is fairly minimal, the movie does manage to throw in some pretty good gags. First of all, there's the gnarly scene where the vamps attack and kill about half of the townspeople in about five minutes. There are some cool aerial shots of the carnage in this bit and I freaking loved it. Secondly, there's the as yet unmatched scene of Eben and Stella driving through town in their truck only to have the vampires freaking lift the thing up by the ass end and flip it over. That. Was. So. Cool.
There are only three mentionable gore gags, and I think you'll know which ones I'm thinking of if you've seen the movie. There's a vampire getting sliced in half with this vehicle that's got a chain saw thingy attached to it; there's the guy who gets his hand ripped off the trash chewer-upper; and there's the part where Eben kills the head vampire by punching him through - not in, through - the mouth and coming out the back of his head. The whole fight scene before this wasn't all that exciting so this bit comes out of nowhere and had me clapping with gleeful delight. There's also an earlier cool scene with a freak-ass vampire little girl covered in blood. Children = scary, we all know that. 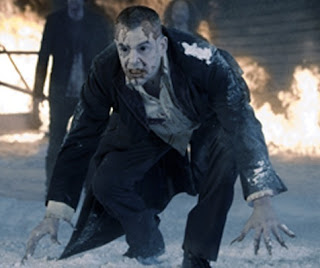 Now, Eben was able to do this because beforehand he had injected himself with the blood of a vampire-infected person. So even though we know he is going to win the day and save his beloved, he's going to have to die because now he's a vampire. The movie ends with Stella and him sitting on their favorite spot watching the sun finally come up and Stella holding Eben while he turns to ashes. My goodness, what an utterly depressing ending. But you know, I liked it, and I thought the effects work in this scene was gorgeous. The way it was shot and the music just made it so disgustingly beautiful. Stella's in agony but trying to stay strong and then gets this look on her face like she's going to go out and fuck up every vampire she can find. I love you, Melissa George, I really do.
I'm not calling this one of the greatest vampire movies out there, but 30 Days of Night sets itself apart from the others with its chilling (no pun intended) tone and trading out CGI-boosted action sequences for a couple of good emotionally draining thrill moments. I'm not sure how I'll feel about the sequel though... anybody got thoughts on that one?
Posted by Michele (TheGirlWhoLovesHorror) at 7:44 PM