Project Terrible: The Oogieloves in the Big Balloon Adventure (2012) 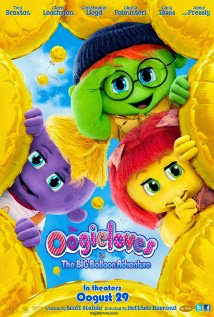 Yes, it's a kid's movie. Yes, I watched it. I have Alec at Mondo Bizarro to thank for giving me this movie - ha, thank?! - for this Project Terrible round. Well I have to admit that at times I did get a strange childish pleasure out of watching something completely meaningless that didn't require any kind of thought. One thing that was pretty fun to watch was all the big name celebrities who had roles in this movie, the cinematic masterpiece that is The Oogieloves in the Big Balloon Adventure. 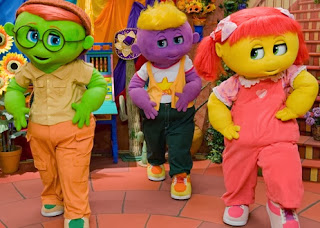 So the Oogieloves are Goobie, Toofie, and Zoozie and they are these Teletubby-like things I guess who are throwing a surprise birthday party for their friend Schluffy... who is a pillow. Their other friend J. Edgar - who is a vacuum cleaner (haha, like J. Edgar Hoover, geddit?) - gets Schluffy five magical golden balloons but loses them on the way home so the Oogieloves go out to recapture each one, while meeting some friends along the way.

Okay, really? I have to actually write a review of this? This is probably a really good movie for kids because it is supposedly the first interactive children's movie that was in theaters. There are prompts on the bottom of the screen for the kids to get up and dance and sing along. The problem is that there is nothing educational about this movie at all aside from a little counting and singing ridiculous songs that I now have stuck in my head. And apparently no one gave a crap about any of this because The Oogieloves in the Big Balloon Adventure has now gone down in history as being the movie with the worst box office opening weekend in history! Ouch. By the numbers, that makes it the worst movie ever... but I watched Howling 7. I love the Oogieloves compared to that movie. 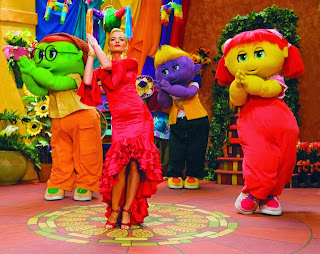 Here's a rundown of the celebrities that showed up here: Cloris Leachman played Grandma Dottie, a woman who loves circles and lives in a "tree-pot" (a teapot in a tree); Chazz Palminteri is Milky Marvin, the beatboxing owner of a milkshake shop where you can get a milkshake made out of anything; Cary Elwes (!) plays Bobby Wobbly, a cowboy who owns a bubble truck and continuously bounces up and down; Toni Braxton is Rosalie Rosebud, a diva singer who loves roses but is allergic to them; and Christopher Lloyd and Jaime Pressly are Lero and Lola Sombrero, who live in a giant sombrero that can fly when powered by dancing tango. Oi. Should I think that it's kinda cute that these guys were in this movie or feel embarrassed for them? Okay, I admit. It was cute. Cary Elwes is possibly the best thing about this whole movie, even though I don't think I'll ever be able to look at him the same way again.

So, I don't have too much else to say about this. It's a kid's movie! And not really a horrible one either, just one that's really weird. I mean, most kid's movies are weird anyway but with stuff like Cars and Toy Story, I don't see this as being one that will become any kid's favorite movie to watch. The audience participation crap didn't even seem like it would all that fun for a child to join in on - and NO, I did not participate while watching it. The Oogieloves in the Big Balloon Adventure was a nice attempt at a new kind of movie for kids to go see in theaters, but things didn't turn out the way they thought. Show your children Toy Story. They'll like you a lot more for it. 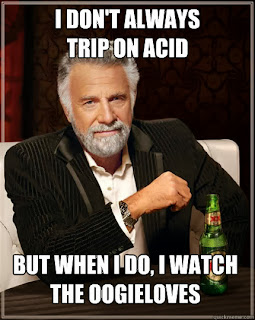 Posted by Michele (TheGirlWhoLovesHorror) at 3:38 PM