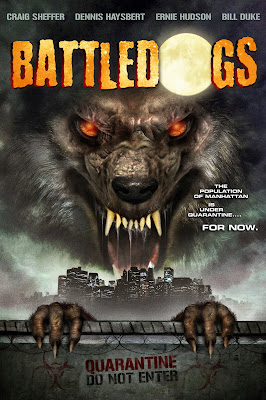 Oh, right. Because I really needed to watch another bad werewolf movie. There are some things that I can give Battledogs props for - making "Battledogs" one word is not one of them - but it's still not that good, and the fact that it is a SyFy Original Movie should help you believe that. Battledogs comes courtesy of Bob from Gaming Creatively. 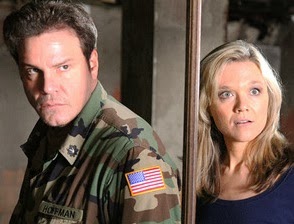 A wildlife photographer traveling to JFK is carrying the dangerous "lupine virus" and soon spreads it to hundreds of other people at the airport. The infected are quarantined on a island in New York, and while some try to quickly work to find a cure for the virus, one Army general decides that these creatures would be perfect for combat situations and tries to stop anyone who gets in his way.

The lineup of actors for Battledogs is pretty good though there are only two well known names. Ghostbuster Ernie Hudson has a small role as the head of security at JFK and then freaking Dennis Haysbert plays the evil Army general. He's also got some facial hair going on here, which I really didn't like. It was funny to me to see him in this because in one early scene they show the movie's bald, black President of the United States - and then the next scene is Dennis Haysbert, a.k.a. the greatest fake President EVER from "24." And now he's General Monning, the guy with the genius idea to have an army of werewolves to fight our enemies. Oh, Dennis, why??? 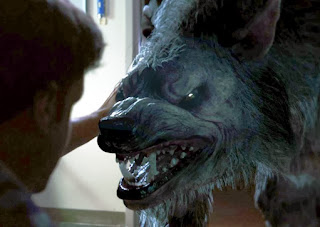 Cute little Ariana Richards is also here as Donna Voorhees, the Patient Zero for the lupine virus because she got bitten by a wolf while photograhing them. The funniest part of the movie is when our other main character Major Hoffman (Craig Sheffer, a.k.a. David Boreanaz's long lost brother) actually asks Donna, "Why did that wolf bite you?" Why did a wolf bite somebody? Maybe because it's a wolf, just sayin'. There's not much to know or care about any of these people as the movie is all plot driven, and most of it is just a long chase sequence of Donna, Hoffman, and the doctor trying to save them all from Monning. It's pretty ridiculous how a high ranking Army general makes a decision in about 2.5 seconds to go against his entire moral code and kill innocent civilians and fellow Army buddies for the stupid idea of training werewolves to fight for the United States. Like, does he think that would actually turn out well? 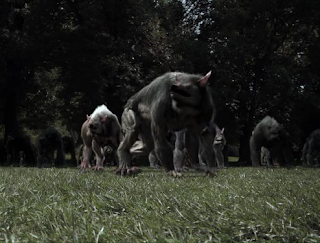 Treating werewofism (I don't think that's the right word) as a virus is a good idea, I gotta say. The moon has nothing to do with when the infected transform. They get bitten and they change almost right afterward. They also change when their heartbeat rises above 150 beats per minute. Though the werewolves themselves are all CGI, I didn't hate the look at them as much as I thought I would. They look good, which is something I can't always give SyFy credit for - Piranhaconda, anyone?

I can't give the movie too much credit for the characters or the plot, but I was surprised to find that Battledogs was not as laughably ridiculous as every other original movie from SyFy. It's watchable, nothing groundbreaking or memorable, but definitely watchable. I've gotten worse movies so I'm pretty pleased with this one!

Posted by Michele (TheGirlWhoLovesHorror) at 8:18 AM