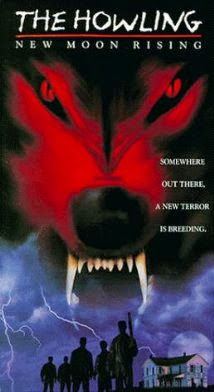 Given the general, overall suckiness of all these Howling movies, I wasn't in the least bit fazed when everybody tried to tell me that The Howling: New Moon Rising was the absolute worst of the series. They're all bad! Why should this one be any different, you know? Well, it turns out that this one is possibly a new kind of bad. 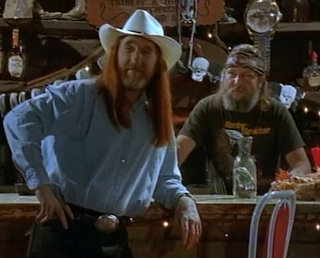 Long-haired Australian biker boy Ted Smith rides into tiny Pioneer Town and gets a job at the local bar. He's related in some way to three previous Howling movies, but I didn't really remember how until they told me. Anyway, the usual starts to happen - disappearances and murders start to occur and seems to be the work of a "large animal," and as the new kid in town, townspeople start to suspect Ted as the culprit. Meanwhile, a priest and an inspector are hot on the trail of missing werewolf Marylou (from Howling 5) and it leads them right into Pioneer Town.

The movie actually sets itself up for the audience quite nicely. The opening scene is three guys standing around a skeleton found in the desert, and they all say, respectively, the best-slash-worst first lines of any movie I've ever heard - "Jesus Christ!" "Holy shit!" "Mother of God!" So appropriate for the reactions everyone will probably have while watching this movie. It doesn't get any better after this first scene, it just gets more stupid and boring. 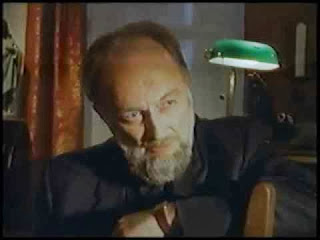 The bar that Ted gets a job at - Pappy and Harriet's Pioneer Town Palace - is where everybody in town hangs out all the time. And this where a good chunk of the movie takes place, with some very uninteresting, inane, and unfunny scenes that have no relevance or importance whatsoever. This includes the most unenthusiastic line dancing I have ever seen, lots of drinking by the menfolk at all times of the day, lots of bad joke-telling, and far too many musical interludes for me to be comfortable with. My goodness, all those shitty montages with that shitty country music playing over them? All the random scenes of Harriet and Pappy singing with the band at the bar? Singing around the campfire? Ugh, stop it! Stop it now! This movie is certainly a first because it seems to be the first werewolf country western musical movie. And that's a horrible thing to be. Also, fuck George Jones and the number of times they mention him. 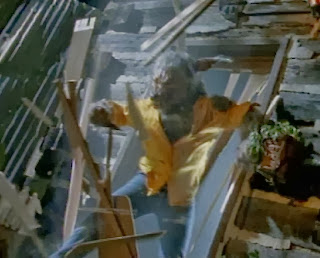 New Moon Rising infamously strings together its own flimsy plot by saying that it's all connected to the three previous Howling films, and actually includes scenes from all of them. I never would have guessed that Ted was the same guy who survived the castle in Howling 5 but apparently he is. Shows how memorable that movie was. Ted was also a guy in Drago that Marie Adams (who actually has a few scenes in this movie, too) supposedly killed in Howling 4, and they totally made that shit up. Anyway, by the end, the plot gets twisted up so much that it gets really ridiculous. The priest and inspector are talking the situation out and they bring up things that the audience never saw happen so it's incredibly confusing. Three dead guys all lead to Ted, but apparently it was the work of Marylou the werewolf who was somehow able to assume the form of another person (not possible, by the way!) in the town, this chick named Cheryl. It's anybody's guess as to why she was trying to frame this guy in the first place or what her ultimate plan was. Whatever it was, she failed miserably. 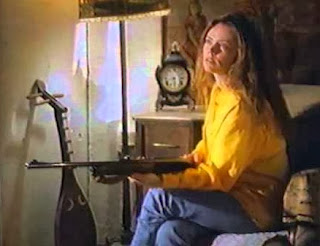 Here we are with the seventh Howling movie, and while there is plenty of werewolf talk throughout, we again don't actually see any werewolves until the very end. Very briefly. Like about 15 seconds. The red filter werewolf POV shots were more exciting than Cheryl's lame transformation and her equally lame demise that occurs off screen when she's shot by the townspeople after bursting through the door. The end.

And not a moment too soon. The Howling: New Moon Rising is simply a pointless movie. It sucks, and it's pointless and irritating with how horrible it is. All the actors, including writer-producer-director-actor Clive Turner, are terribly lifeless and boring, much like the rest of the movie. It's not even funny though it tries very hard to be and those attempts just turn out to be really pathetic. Ugh, bad movie. Do yourself a big favor and avoid this one at all costs.

Posted by Michele (TheGirlWhoLovesHorror) at 12:37 PM