Project Terrible: Evil Behind You (2006) 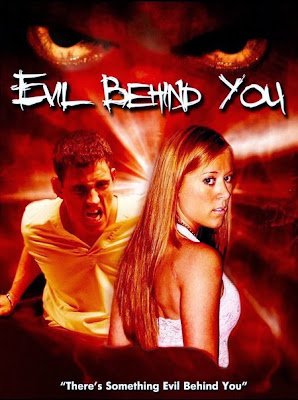 Wait, what? A Christian pseudo-horror movie? Really? Oh, this is not going to be fun. My second-to-last Project Terrible assignment is Evil Behind You and it comes courtesy of Mr. Steve Miller, Writer of Stuff. The most pathetic thing about this movie is probably the fact that I watched it alone on a Saturday night before going to bed at around 8:30. 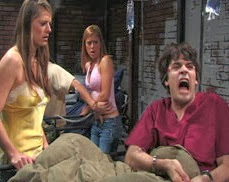 In Evil Behind You, two couples - Debra and Tony, and Lisa and David - have been drugged and abducted and taken to a locked room. The men are lying on gurneys with bandages over their ears and electrodes on their temples so that their brains can be monitored. As the two girls argue about how to get out, the guys start to go crazy from whatever they were given, claiming that there is an evil presence in the room with them. Is it just the drugs or something real? Dun dun dun.

I've read a few things online about this movie and some people are being way too nice, claiming that it has a "nice premise" and all. No, no it doesn't. There is hardly a story to the movie, and what little premise it does have - to me - is only there to serve the tiniest little message about God and demons and fighting evil. The people behind the kidnappings are Middle Eastern and they've also kidnapped a doctor to help them with the experiment they are doing on David and Tony on meningitis. Did I get that right? There's some kind of meningitis problem with them so they're experimenting on these guys to get a serum to stop it? It's something stupid like that. 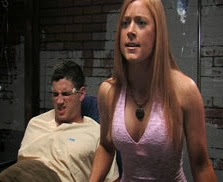 You're supposed to think that the meningitis is what is making David and Tony crazy because throughout most of the movie they are constantly yelling and freaking out something they can feel in the room - an evil something! And of course, they always seem to feel that it is "behind" them. If there's more meaning in that, I didn't get it. Lisa is the sensitive, empathetic one who tries to help the guys, while the other chick, Debra, quickly turns into a bitch about it. Anyway, they FINALLY reveal what the things are - and they're just these skeletal demon things that take souls to hell. Goddamnit. That's lame.

The Christian stuff I can deal with, but there is such a strange dichotomy happening in this movie. Our two main girls are of course hotties with bodies, and their wardrobe is cleavage-revealing tank tops with low rise jeans, all topped off with their perfect, shiny, straight "come-fuck-me" long hair. Sure, I was jealous but I was also so annoyed that even this movie would use sex appeal where it is not needed AT ALL. There was no reason for them to be sexy. I was also a little offended that the captors were Middle Eastern - really bad, fake Middle Eastern, but Middle Eastern nonetheless. Just because they're easy targets for bad guys in movies? And where are they? And why are they there? And how did they pick these people? You see? Not a good premise. Too many unanswered questions.

If you were expecting any action in this movie, you are going to be sorely disappointed. There is one hilarious part where one of the other patients in the room suddenly gets up all roid-ragey and attacks. Lisa somehow manages to get him down and then kills him by hitting him about three times... with a folding chair. Sure. There was also the funny flashback where the kidnappers kill the doctor's wife by shooting her about three times near the head region as far as I could tell, but I don't really know for sure because there was not a single wound or drop of blood. A few other people also get shot and the best they can do is put a little spot of red on one dude's coat. I'm sure they were trying to keep things clean - morally and physically, probably - but a little bit goes a long way in terms of believability, ya know?

There's lots of background about the character Lisa and her journey through forgiveness and redemption, blah blah BLAH, but it's just annoying. The movie is not good, not exciting, and not nearly as "inspiring" as they try to make it. And now that I've run out of pictures to break up the text, I've also run out of interest in berating Evil Behind You. I watched it, then moved on with my life and forgot about it. Back to lazy Sunday!

Posted by Michele (TheGirlWhoLovesHorror) at 1:26 PM

Labels: Evil Behind You, Project Terrible