Movie Reviews: The Resident and The Roommate (2011)

Grabbed these two movies out of the Redbox yesterday. Knew they were going to suck. Watched them anyway. Call me a glutton for punishment. Two movies about obsession. Neither one of them good. Must be hard to accomplish.

Hilary Swank plays Juliet Devereaux, an ER doctor looking for a new apartment in New York City after separating from her cheating husband. She finds the perfect place - lots of space, nice price - with a cute landlord named Max who could become her next love interest. But when she has trouble sleeping and feels like she's being watched all the time, she starts to suspect that Max isn't as charming as he seems to be. 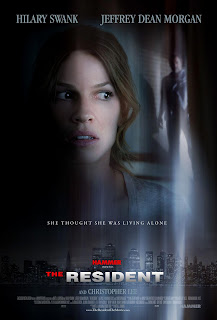 As a fan of Hilary Swank, I thought she might be the big highlight in this otherwise mediocre-looking movie. It started out not all that bad and overall the story is new and very creepy, but the execution and resolution are extremely disappointing. However, there is a nice turn in the narrative about halfway through. The movie stops being told exclusively from Juliet's perspective and immediately switches to Max's perspective, actually literally rewinding the movie and telling the same scenes over again as they are seen by the villain. The rest of the movie is then told by both of them which is kind of where it falls flat.

The scenes of Max sneaking into Juliet's room and other things he does to spy on her are very creepifying, if I may make up a word. And there are a couple of pretty good scenes - hiding under the bed, the needle under the toenail - but it all felt very boring to me. The suspense was minimal, if there was any at all, and at the point where things were supposed to be getting exciting, I found myself wandering around my room looking for things to distract me. Bad sign. I'm not even sure why the movie goes wrong for me. Maybe it was the dreaded anticipation of watching that final run and hide-and-seek showdown between the two main characters that I was just really sick of seeing. And whoops! Yup, there it is in this movie.

I did like the ending, though. Max is dead and Juliet throws down her weapon like a badass and walks away. One more shot of the dead guy and that's the end. There is no she's-a-much-stronger-woman-now denouement scene. The killer dies and the movie ends right away, which is the way I think most of these movies should end. Kudos to Jeffery Dean Morgan, as well. Good performance.

is one about which I had absolutely no expectations. It is lame and uninteresting all the way through, with situations and characters you've seen before but hopefully never will again.

Sara Matthews is excited for her college experience at the University of Los Angeles and everything seems to be going great at first. She makes friends, meets a cute boy, and gets along with her sweet roommate Rebecca. Rebecca soon becomes completely obsessed with becoming Sara's "bestest best friend," however, and Sara and everyone she knows is in danger. 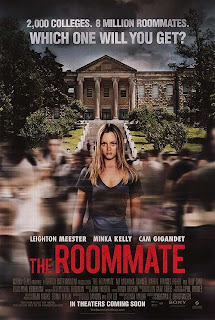 Oh holy jeebus, I feel like I have seen this movie a hundred fucking times already. With Single White Female

. Attacking the people who you deem unworthy of being around your obsessive friend is the same as in every other movie like this. There is nothing new here, nothing that even comes close to being a new idea or a new twist on the same old story.

Granted, the whole movie is pretty much given away in the title and the kind of movie it was marketed as. Everyone who has heard of this movie or even seen the poster - not even the trailer - can guess the major plot points without even seeing the movie itself. I kept watching the movie hoping that something unexpected would happen and at some points it felt like it might go off in a different direction but then it didn't. Disappointing that the screenwriters just fell into the same old habits.

The acting is not terrible. The girl playing Rebecca reminds me of Amanda Seyfried so I tried to imagine that it was her so I could find something about this movie that I liked. But there was just honestly not that much liking going on. The Roommate

did keep me mildly interested throughout, but looking back on it as a whole, this movie is just a dud. It is ridiculously predictable and really, that's all there is to say.

A final note about this movie: Kitty in the dryer? NOT COOL, you sadistic motherfuckers. Not cool at all.
Posted by Michele (TheGirlWhoLovesHorror) at 10:00 PM