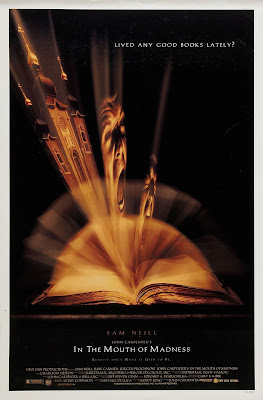 Hi, John Carpenter. So I just watched In the Mouth of Madness

(obviously) and I have a confession to make. I've said for a while now that I love you and your movies, and I really and truly do. But the truth is that I only just recently - like in the past few months - saw a good chunk of your movies. Halloween

, of course, I know by heart but I decided to catch up on the rest of your oeuvre, and found out that my knowledge of your work was miniscule. And it's still going to be a little miniscule (got a few more movies left to see) but I feel more confident in saying this: YOU RULE, BUDDY! 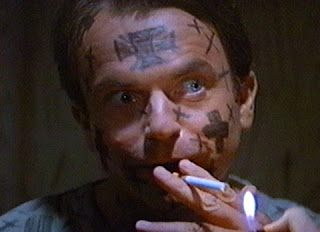 It's a mad, mad, mad, mad plot: John Trent is an insurance investigator hired to find the hottest horror author, Sutter Cane, who has gone missing. With the aid of Cane's editor, Linda Styles, Trent is led to Hobb's End, New Hampshire - a fictional town from Cane's novels which has suddenly become all too real. What is fiction and what is reality becomes blurred as events from the newest Sutter Cane novel seem like they are really happening.
Let's start out by saying that I am now officially in love with both John Carpenter and Sam Neill. I always kinda knew that Neill ruled (Jurassic Park

, anyone? And Event Horizon

is off the freaking chain) but he's not as prolific as some actors so I sometimes forget that he even exists. Then I see a movie like In the Mouth of Madness

and realize again how hella cool he is. It's partly the voice - I'm a sucker for great voices - but seeing an actor like him deal with all the batshit crazy stuff that happens in this movie makes me love him all the more. 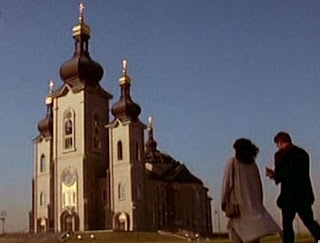 So Sutter Cane, in this movie, is apparently way cooler than Stephen King. A blasphemous remark to me, but that's beside the point. People go literally crazy when they read this guy and his newest book, In the Mouth of Madness, is about the apocalypse that starts in Hobb's End. Trent is at first convinced that Cane's disappearance is an elaborate hoax for publicity even when he actually goes to Hobb's End - a place that does not exist on the map - and more and more freaky stuff happens. Linda tries to tell him that it's all in his books and his fiction is reality, but that's obviously crazy, right? Not possible? The thing that bugged me about this the first time around was why Linda seemed totally convinced that what Cane wrote became true, instead of the more obvious answer that he based what he wrote on this place. But that of course turned out to be totally wrong and I felt like an idiot for a while. Anyway.
If you're confused by the plot, don't worry, because there is a ton of freak-ass imagery here to keep you distracted from not really knowing what's going on. We got a guy attacking Sam Neill with an axe, paintings that move and change, various squiggly and tentacle-y demons, and one very traumatizing scene where Linda crawls around the road with her head turned upside down. *shudder* Won't be forgetting that. There are excellent effects by the boys at KNB - great mechanical creatures and the makeup on the people who go mad after reading Sutter Cane's novels are pretty gross. Not to mention those scary looking kids and the poor three-legged dog. 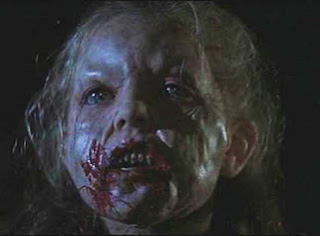 If you like a bit of humor with your horror (and I always do), there are a few subtle bits in this film. Sam Neill as a nut in the nuthouse are entertaining - there's something about the way he does his face and eyes that almost always has a touch of comedy in it. But my favorite part was one including the old lady at the hotel. Remember this? When she's talking to Trent and then he walks away the camera pans down to show that she's got her old, naked husband handcuffed to her ankle? On one side this is incredibly hilarious, and on the other a tad disturbing. Great little moment either way.
The ending is fantastic. The movie is bookended with scenes of Trent in an asylum, telling his story of his search for Sutter Cane to some doctor whose affiliation is never revealed. By the end, the madness of Cane has reached the asylum and Trent walks out of his padded room to a devastated and empty town. He goes to a theater showing the movie version of "In the Mouth of Madness" and sees that the movie is starring himself with scenes from his own experiences. Either he and everything he's been through is simply a work of fiction OR there really are demons that told Cane what to write and all of it, the apocalypse, is coming true. Whichever way you see it, this is an unhappy ending, but a delightful twist at the same time.
Sidenote: Who should I see pop up in this movie most unexpectedly? 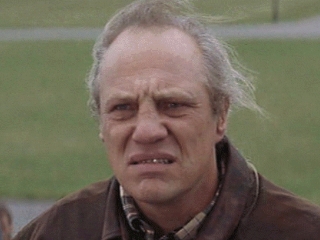 The return of Vigo the Carpathian! Cool! How could anyone forget that distinctive face? Has nothing to do with the movie really, but you might have laughed at me when I squealed and pointed at the TV, saying "Vigo! It's Vigo the Carpathian! 'Alright, give me angry. Yes! Good! Hey Vigs, do the girls like you? Huh? What about the guys?'" Much like all children of the 80s, I have watched Ghostbusters

(in this case, Ghostbusters 2

) WAY too much. But whatever, because those movies rule.
There's really not a lot of exposition and the movie's 90-minute time clock counts down fast, but that is more of a good thing than a bad thing. The movie never gets boring and there's always something macabre or fantastical around the next bend that keeps your mind on its toes.
So now that I've taken care of not having seen In the Mouth of Madness

up until now, I've gotta start plowing through those other flicks. They Live

is next, I believe.
Posted by Michele (TheGirlWhoLovesHorror) at 4:38 PM

Labels: In the Mouth of Madness, John Carpenter, Sam Neill