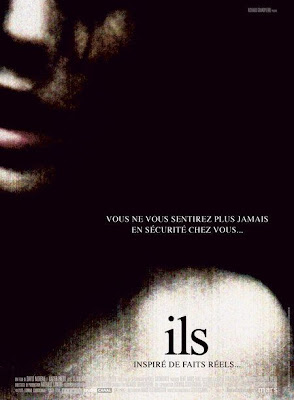 It's a buyer's market out there right now, and while I don't know diddly about real estate, I do have one piece of advice for everyone: Take your name out of the running for that huge and beautiful secluded country home. Yes, I know it's quiet and there's all that extra space you really need but TRUST ME. I've seen enough horror movies with a kick-ass gorgeous house in the middle of nowhere where nothing but bad things happen. The events from this French horror film, Them

Lucas and Clementine are a French couple living in an isolated mansion house in the Romanian countryside. In the middle of the night, they are awakened to the sounds of their car being stolen. But when the power goes out and unseen foes stalk them from inside and outside the house, they realize that their situation has just become much more dire. 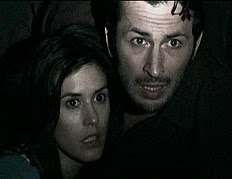 So before I look up a single thing about this movie, I know one thing that pretty much everybody is going to say: They're going to compare Them

. Closer to the conclusion of the film, I would said that comparisons can also be drawn from Eden Lake

as well. Make no mistake, Them

has a highly unoriginal plot. The plot is also very simplistic and really, not a lot happens. But it's still a good movie for the most part, albeit mediocre at times with a subdued climax that may put some people off.

Where this film succeeds is at technique. The film quality provided by Netflix Instant was somewhat grainy and oddly to me, the picture looked like it was squished from the sides (hate that) but the this has no bearing on the most important element used in the movie to establish atmosphere: sound. The cinematography is nothing special and at times it is way too dark, but the use of elevated natural sound heightens the tension and establishes the tone. 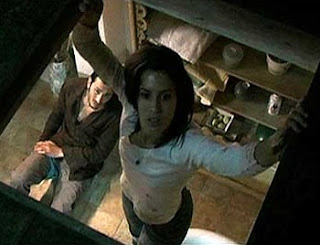 From the beginning of the movie, all those little, unimportant background noises seem to be turned up just a tad, such as the rain, cell phone beeps, and the turn signal in Clementine's car. This technique makes the both the character and the audience very aware of and attuned to their surroundings which can be quite frightening. The next sound could be that weird clacking noise heard throughout the movie - and it could be coming from anywhere.

, the bad guys in Them

are mostly unseen until near the end of the film, and the revelation of who has committed these acts is supposed to be a big shock. To me, that shock has played its part and as horrible as it sounds, I'm not so surprised by the commission of violent acts by juveniles anymore. Sadly, that is a part of our world now. What gets me is that there is absolutely no information given about these kids. Do they live in the sewer tunnels where they eventually corner Clementine? They seem to know their way through the labyrinth under the streets. They have no names and no real motive for their actions, which is always much scarier and more unsettling. 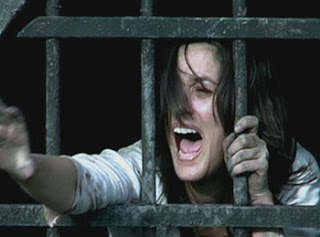 So in the end we know nothing about our killers and we don't get a great deal of character development for Lucas and Clementine, either. We are given a tiny peek into their lives and are told just enough about them to make us like them. They are a happy and playful couple who seem to be in love. And really, what more do you expect from a movie like this?

The writers always seem to think, "All we have to do is show you that these people are nice and that they don't deserve to have these horrible things happen to them and you'll totally feel sorry for them!" To some extent, yes, that's true. But if we can't gain sympathy for these people from their normal lives, then we have to see them go through something so absolutely horrible that if we don't have sympathy for them after that then we can be classified as sociopaths. But the bulk of Them

is a chase movie. A few minor jump moments and little bit of torture (Clementine is made to breathe through a plastic bag, probably with something nasty in it) and that's it. But we learn at the end that both Lucas and Clementine died, and they certainly didn't deserve that. But the ending is where I gained the most sympathy for our victims. 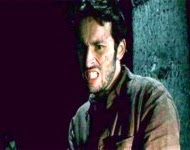 I said before that the climax of the film is subdued and that not a lot of people liked it. It is so subdued that it's hard to really define what the "climax" is. There is no escalation of the violence and the movie just kind of ends. But in a way, I liked what happened. It's a real downer, depressing ending when you're led to believe that Clementine might get away. She's running down the concrete tunnel toward the bright sunlight, but when she gets there, the exit is blocked by steel bars. She's screaming for help, a car passes by and she's gone. We really don't need to know what happens after, because it's probably not good. It's one of those "Oh fuck, she's screwed" endings, where that last little sliver of hope disappears and the bad guys win. It sucks, but it's perhaps closer to the truth than we want to believe.

A little overshadowed by its predecessors and similar films, I would still say that Them

still deserves a look.
Posted by Michele (TheGirlWhoLovesHorror) at 8:00 PM