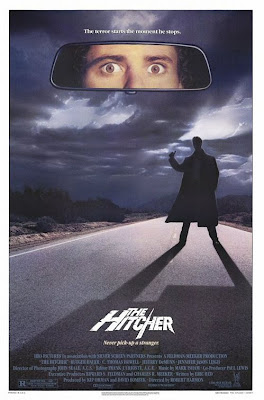 Sometimes it's a bad idea to see a remake before the original. I've actually always liked The Hitcher

from 1986 yesterday. While the new movie is a slick Michael Bay release that ups the gore factor, the original script from Eric Red is much more subdued and cold, filled with hopelessness for the main character and apathy for the villain. 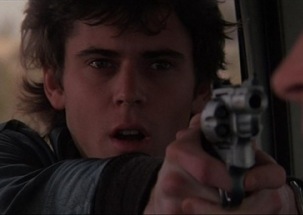 My mother told me never to do this: While driving cross-country, Jim Halsey stops for a hitchhiker one rainy night and enters a nightmarish situation he could never have imagined. The hitcher is John Ryder (haha, get it? Ryder... rider?), a cold-blooded killer who informs Jim that he will be his next victim. Jim initially escapes Ryder, but soon finds that Ryder is following him wherever he goes and even setting Jim up for his own crimes. Now on the run from both Ryder and the police, Jim's only salvation is a waitress named Nash who soon joins him.

I can't believe how people shit on this movie when it was first released. The more opinions I read from Roger Ebert on horror films, the more I despise him as a critic and almost as a human. He doesn't get these movies and he never has. The Hitcher

got zero stars. To him the movie is "diseased and corrupt" and "reprehensible" simply because John Ryder is this non-discriminatory killer without a past or a reason for his menace. I just don't understand it - why does a movie have to be Oscar material to be admired? Why doesn't Ebert appreciate and respect how these movies portray the real evil in the world? Real emotive art is supposed to make us feel like shit about the world we live in, but also shows that there are people with the strength and balls to do something about stopping the evil. Notice my new tag for this movie - "Roger Ebert can kiss my ass." And indeed he can. 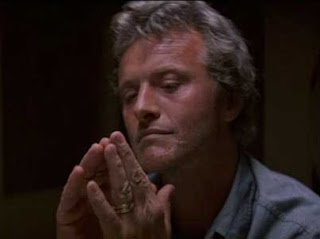 The suspense and twists in this movie are phenomenally well paced and every time we feel that Jim is safe, Ryder shows up again in the creepiest ways - the finger in the fries, the murders at the police station, kidnapping Nash in the bed while Jim is in the shower. These scenes are alarming in how they show Ryder's cunning and that is truly terrifying to me. When repeatedly asked why he is targeting Jim, the only explanation we get is a creepy smile.

Rutger Hauer as John Ryder is the perfect unrelenting serial killer with a bit of a twist to his character. It is this unrelenting attitude that brings about one of the film's unbelievability factors - how Ryder seems to be pretty much psychic and knows where Jim is and where he is going to be wherever he ends up - but it also adds to Ryder's menacing character and keeps Jim in danger throughout the whole movie. Otherwise, how could we believe that Jim is so trapped on this wide open highway with practically no one else around? Ryder has no qualms about brutally murdering anyone he comes in contact with, whether it be a nice family with children or even several cops, whom he viciously guns down without a second thought. 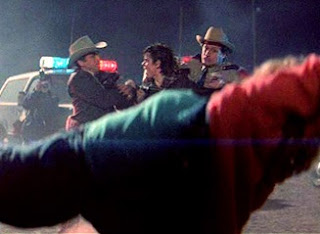 The twist on his character is that he is two completely different people at the same time. On the one hand, he is the cold-blooded psychopath on a murderous mission. Yet Hauer also brilliantly brings about his other side - that of a man who seems to want to stop what he's doing and have somebody finally kill him. He tells Jim in their very first encounter that that is what he wants him to do. He says, "I want you stop me." This is not a mind-fuck statement to make Jim feel more helpless, but rather Ryder really does want Jim, or somebody, to stop him. He makes Jim say "I want to die" when it is Ryder himself who wants to die. This is a trait of a serial killer that I have not seen before or since in a movie and it is a brilliant twist that gives this machine of a man a character that has so much more depth.

The blood in this movie is minimal and the straightforward narrative relies more on suspense and the continual breaking down of the main character. The murder of the family in the station wagon is implied but never seen - only portrayed through the blood dripping on Jim's shoes and the way he runs away in terror and throws up from what he has witnessed. The most iconic scene from the movie is of course Jennifer Jason Leigh as Nash being tied between two semis and then ripped apart, but again it is not seen. The remake shows this part with all the special effects the team can muster which I like because I like blood and stuff, but I'm not sure it was a better decision to show this brutal act rather than make the audience picture it like the original did. 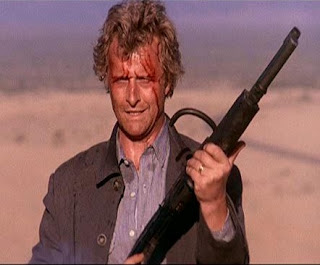 is not without its questions. Like, if Jim is driving from Chicago to San Diego why did he take such a seemingly long detour through El Paso? Did Ryder really cut off that guy's arms, legs and  head with that tiny switchblade? If Ryder was supposedly following Jim, how could he do that on the most open highway in the world without being seen? Jim wanders aimlessly off the main road in the desert and happens upon the diner. He's not there for very long before we find out Ryder is also there. We don't see him but he manages to sneak a severed finger onto Jim's plate of fries. Whuh? Also, why would a nice family in a station wagon let a stranger hitch a ride with them and then let him sit in the back with their children? Stupid people.

Despite any errors in believability in the scriptwriting, The Hitcher

is a classic thriller that I should have seen a long time ago. Seeing the remake first fuddled with the experience of watching it for the first time, but I still loved it. The acting and the pacing, the ghost-like quality of the villain and the desperation of the victim are all elements that make this movie one to see and talk about for years.
Posted by Michele (TheGirlWhoLovesHorror) at 10:55 AM