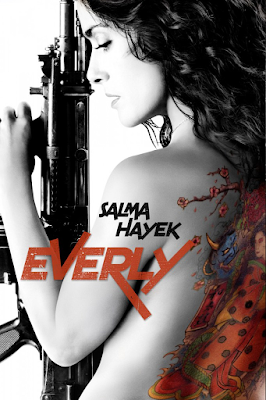 I've been listening to Adam Green and Joe Lynch's podcast The Movie Crypt pretty religiously for the past week or so. It is currently on its 105th episode and I have been desperately trying to play catch up - I'm only on episode 29, though, so I'm not sure that I'll ever be truly caught up unless I listen to it in my sleep. Where I'm at, Joe has left and come back from filming his new movie Everly in Serbia, and has been working on post-production. And every little bit of information that he's been giving listeners has been making me so, so excited to see it that, finally, I just couldn't take it anymore. 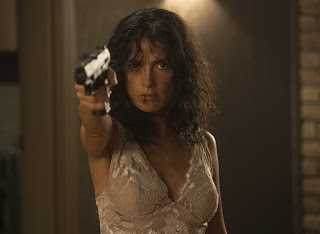 Everly is the story of a woman (her name is Everly) trapped in her apartment, who must fight off the constant barrage of assassins that are sent after her by a sadistic mob boss. Joe (I feel like I'm on a first-name basis with him because I've been listening to him so much - I'm even listening to the Everly commentary right now) does an amazing job with what I have said many times before is one of my favorite types of films - ones that take place in a single location.

The small twist that Joe puts on this gimmick, for lack of a better word, is that Everly is a pretty hardcore, violent action movie that all takes place in basically one room of a loft apartment. And that doesn't limit the film at all - there are just as many guns and bodies, and just as much blood and gore as any other action/thriller out there. There is never a dull moment, never an unimportant scene, and never a line of dialogue that doesn't add something to the plot and the characters. Plus, Everly is just a really, really fucking fun movie to watch. Look at Salma Hayek on the poster up there - that alone should make you excited to watch the movie. 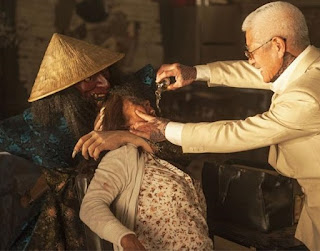 Joe, who also came up with the story of Everly, brilliantly adds in a healthy dose of comedy throughout the film as well. This almost doesn't seem possible when the first scene in the film is Everly stumbling into the bathroom naked after a violent gang rape. But the fact that the rest of the movie's violence is so unrelenting, and the amount of bad guys that come after Everly is almost kind of absurd, that it's easy to fall into the comedic side of the story. Most of the comedy is situational, where the gore and action are used for gags, especially one part where Everly opens the door and immediately blows someone away with a shotgun.

Then again on the other side, there's a very serious story to deal with here. Not just the assault at the beginning (which is never shown but only heard, if anyone is weary) but also the whole world that Everly has to live in. She's in an apartment building filled with other prostitutes under the control of the boss, Taiko - not to mention the fact that Everly has a five-year-old daughter and a mother that she has not been in contact with for a long time. They are featured pretty prominently in the movie, as they become Everly's main motivation for surviving and enduring all the shit that is thrown at her over the course of this night. 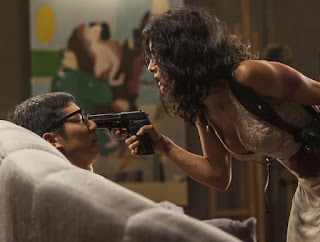 Going back to the gore for a minute: though this is probably looked at mostly as an action movie, Everly definitely has moments that show Joe's love of horror films. There's a nice almost-Shining moment with an elevator and blood, but mostly it is the deaths of two characters that were really fun for a gorehound to watch. I don't want to give too much away because the movie is still fairly new, so I'll just say that one death involves acid, and the other one involves a samurai sword. Yessssss.

Now, Salma Hayek. I mean, she fucking kills it in this movie. Literally. Of course we've known for years, ever since Desperado, that she could handle herself like a boss in an action movie, but I really think she shines so brightly here. First of all, she's just as gorgeous as ever. It's not hard for anybody, male or female, to watch her kicking ass in an apartment for 90 minutes. She is a true action star in Everly, handling weapons and also doing some hand-to-hand combat. But Hayek also brings a lot of heart and sympathy to the character of Everly, and in a roundabout way, to some of the rest of the cast of characters, like the other prostitutes and a character known only as Dead Man. Hayek makes Everly so likable that you might find yourself cheering out loud at the last frame of the film, like I did.

I also had to cheer for my new buddy Joe (who also gives a nice cameo at the end of the film) for really bringing Everly to life. The film is action-packed and visually interesting - there're some really cool lighting and camera work - and they could not have gotten a better actress to see this whole thing through. Loved this shit, see it soon!