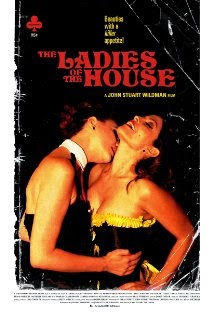 Big thanks from The Girl Who Loves Horror to filmmaker John Wildman for contacting me about his film, The Ladies of the House. I wished I would have gotten to it sooner to help support its VOD release on May 1, but this is definitely a case of better late than never! TLOTH is a thoughtful, yet entertaining film that calls itself a "feminist grindhouse-thriller," but even that intriguing premise is selling the film too short because it is a really great movie experience. Two brothers, Jacob and Kai, go out with their friend Derek to a strip club to celebrate Kai's birthday. They're all trying to have a good time, when the boys make the grave mistake of following one of the strippers - Ginger - home to party. When the party goes sour, they make an even worse mistake, and find themselves trapped in the house with Ginger's three roommates. And these girls have a taste for revenge... and male flesh!

Okay, maybe that description made the movie sound kind of hokey, and I apologize for that because it is not at all. I was actually expecting the film to be a lot more comedic, and therefore I really appreciated the (mostly) serious approach it took to the topics it was trying to explore. TLOTH is very close to being, but not quite, a rape-revenge film and it definitely has some grindhouse and/or exploitation influences. But the film is also able to find its own path within the subgenre and create something unique for itself. 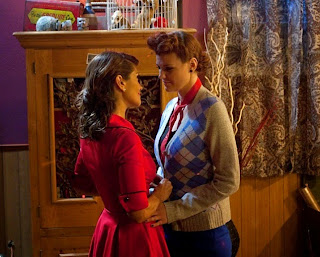 After the stuff at the strip club at the beginning of the film, everything else takes place at Ginger's house, which she shares with fellow strippers Crystal, Lin, and Getty. There's a constant feeling that something sinister is going to happen while Ginger is reluctantly boozing and smoking with the guys, and it's a bit of a surprise just who ends up being involved. The location, coloring, and costumes will also throw you off a bit. The house is a normal, nondescript one that could be located anywhere in the country. Inside, the set design is very lively and colorful in some places, like the kitchen and Crystal's room. The 40s costuming is interesting and beautiful, with Getty looking very much like Rosie the Riveter and therefore taking on the more masculine and tough role, and Lin looking like a typical, poised, midcentury housewife. Crystal and her pigtails therefore make her the child of these two. Their family is a bit dysfunctional - probably because they kill and eat men for food - but there is also genuine care and concern among them all. 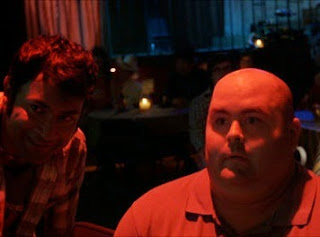 There are some really great characters here, even if all of them have something about them that makes them really unlikable to the audience. Kai is a bit slow in the head, and becomes very creepy and grotesque during one scene, so we're happy to see him go. The filmmakers really seem to want to point out Derek as being the worst of the bunch, giving him lines like "A stripper will go home with anyone if you ask her right!" Yeah, he better not last long. Jacob is supposed to be that one nice guy, but I couldn't fully sympathize with him either. When Ginger is shot, he is the one voice of reason, but that's as far as he gets. He never actually does anything to try to help her, and doesn't really seem to believe that she was defending herself from Kai's rape attempt. And though this is a feminist film where we are supposed to be rooting for the women, they are each also given flaws in their characters (aside from the cannibalization) so that the movie is never completely on the side of either gender. 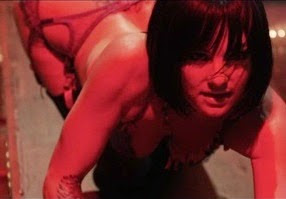 One thing I especially appreciated was the portrayal of the lesbian relationship between Lin and Getty. I'm not a lesbian myself, but I still get angry for them when their relationships are treated as novelties in films. Though these two women are very beautiful, and they do have a short, naked sex scene and a shower scene, it never felt exploitative. Their relationship is very real, natural, and tender and was never just about seeing two hot chicks kissing each other.

The blood and gore is really impressive, and I only wish there had been more of it. I wasn't too sold on the effects at the beginning when the gunshot wounds that two characters receive just look like some red corn syrup on the actors' shirts. I immediately took those feelings back during a scene of Lin making dinner out of Kai. The literal guts in this scene are beautiful and had me completely falling in love with this movie. There is actually a nice balance in the movie with the odd and horrific stuff that happens, and the really touching and loving stuff.

Thank you once again to Mr. Wildman for sending me his film to watch! Male and female viewers alike should enjoy this flick though there is a definite woman power tone and idea behind it. The Ladies of the House has an exploitation-type story and setup, and delivers far beyond any expectations you may have about it. The actors are brilliant and committed to each role, and the gore and action is fantastic. Definitely recommend this one for sure!

Posted by Michele (TheGirlWhoLovesHorror) at 7:52 PM

Labels: cannibal, independent, The Ladies of the House