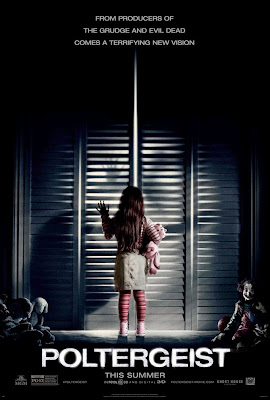 Let me start off by saying that this was by far the least painful theater-going experience that I've had in a while. Normally for me when there are other people in the theater (and sadly that's pretty much always the case considering we're out in public and all) some douchebag has got to ruin it for me by either making noises or just being in my general vicinity. I realize that makes me sound douchey as well, but seriously. People cannot keep quiet in a movie theater sometimes. But thankfully there were no (big) problems this time so I could relax a bit more. And I can't believe I'm saying this, but I really liked the movie. 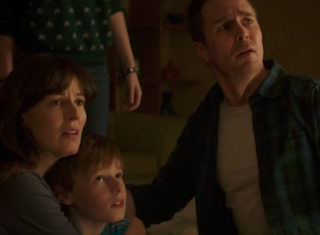 But, Michele! Isn't Poltergeist your FAVORITE horror movie ever? Yes, it is. Well, that and Child's Play, of course. I've been having a really hard time not calling that one my favorite too lately so I think I'm just going to have two favorites. ANYWAY. I did not want to be judgmental going into the remake of Poltergeist at all. So I haven't even watched the original in a few months, and I only watched one of the trailers once and avoided all others and all TV spots after that. And overall, though I could tell it was Poltergeist and though some things were obviously changed around and different, I truly think that this remake was very successful and is quite possibly one of the better ones out there. I came out of the theater feeling really good, and that is always a good sign. 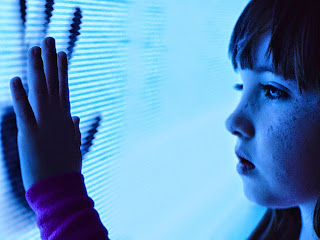 At first I was weary. One thing I've always liked about the original film is that it was not like almost all other haunted house movies where it starts off with a family moving into a new house. They were already established in the house and the neighborhood before anything started. Also, the family was well established. The Freelings were just normal people that were suddenly hit out of nowhere with all this crazy supernatural stuff. The new movie has a new family, the Bowens - Eric and Amy, and their three children that mirror the children in the original - Kendra, Griffin, and Maddy. Sadly, no E. Buzz, but there was a line about how they should get a dog. It's not enough that they are moving into a new house, but they also had to give the family some problems, like the dad being laid off recently. However, this ends up being completely unnecessary because you don't need that plot point to sympathize with the family. 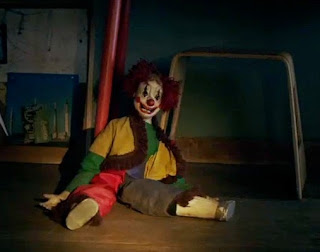 Which brings me to one of my favorite elements of the remake, and frankly, the thing that I was most worried about before going to see it. I've always loved that Poltergeist was like your family-friendly ghost movie, and that it was funny and that there was a wonderful family dynamic. Would this new family be just as wonderful as the laid-back, funny, pot-smoking Freelings? Indeed they are! There is no pot-smoking, but Sam Rockwell and Rosemarie DeWitt are perfect as the parents, as they are so light-hearted, relatable, and absolutely lovable. The new Carol Anne is really amazing, and I loved that she had the same hairstyle, just a different color. Griffin is a bit of a dork like Robbie was but is again played by a wonderful little actor. Sassy Kendra is the annoying teen who thinks a new iPhone is the most important thing in the world - however, when things get bad, she shows a genuine love for her younger siblings. The only place where the remake falters on the family element is at the end when they switch around Maddy's rescuer from the Other Side. Though I get what they were trying to do with the Griffin character, I missed the complete motherly devotion and sacrifice of Diane Freeling that the original gave us. 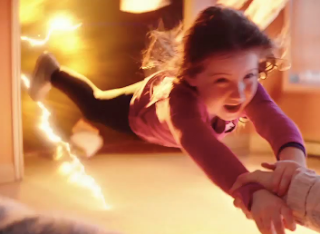 The new paranormal investigative team is headed up by Dr. Brooke Powell, played by the underrated Jane Adams, and her two assistants that I don't think I ever got the names of. Instead of Tangina, we have Carrigan Burke, a sort of Peter Vincent character, if you will. He's played with a wonderful amount of snark and playboyish charm by Jared Harris, whom I freaking love. It was so refreshing and wonderful to see that these side characters were not forgotten in development, and that I was able to love them just as much as the family members they were trying to save. I was so afraid that this remake was going to shortchange the characters in favor of flashy special effects and jump scares. And I was so elated to find out that this was not the case.

Speaking of the special effects, I was really impressed with those as well. There are a few things that don't work out as well - like the comic book stacking and that weird sequence with the drill - but overall, the remake did enough to honor the original film while still throwing in a lot of its own new stuff. Of course the clown sequence probably got the most attention in the marketing (like I said, I didn't watch any of it but that big clown face on one of the posters was a giveaway) and it was handled really well. There was actually more than one clown doll, if you need me to frighten you more. I really liked the toned-down version of the tree sequence, and the addition of one very cool little scene where all the lights come out of the lightbulbs in Maddy's room and go into the closet. Reminded me of the part in the original where they see all the different spirits on the staircase.

Though in this fan's eyes, the remake was a little bit unnecessary, it certainly was not pointless. They treated the classic story with respect, making totally appropriate changes where they felt it was needed and did a good job at it. I still got the same vibe that I love so much about the original Poltergeist from this remake and, honestly, that's all I was really hoping for.

Posted by Michele (TheGirlWhoLovesHorror) at 8:44 PM