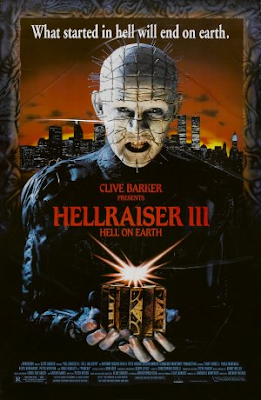 Alright, this is interesting. I'm not sure if this is exactly where I saw the Hellraiser movies going right after the gold that was the first and second films, but I'm gonna go with it. Here we have a new location, a new protagonist, and basically a new Pinhead. Or a new Pinhead and the guy Pinhead used to be. It's kind of weird, but it's cool to see Doug Bradley out of makeup for a good chunk of the movie. 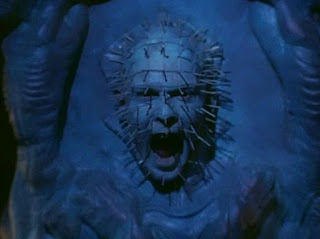 The statue that now holds the soul of the Lead Cenobite Pinhead - and the box that is used to summon him - is purchased by a sleazy club owner named JP. When news reporter Joey Summerskill witnesses the chains from the box killing a young man, she recruits JP's ex-girlfriend Terri to find out more about the Cenobites and stop Pinhead from unleashing "hell on earth."


As aforementioned, there is something a bit different going on with Pinhead in this story. The statue that appears out of the mattress at the end of Hellraiser 2 is the Pillar of Souls and has all these agonized faces on it that represent the souls trapped inside, one of them being Pinhead's. But it is only his demon side that is trapped here. Also trying to make contact with the real world, to stop his other self, is the soul of his human side, Elliot Spencer, who is in limbo. Spencer communicates with Joey through her dreams and helps her. He's actually quite charming, so I very much enjoyed these scenes. 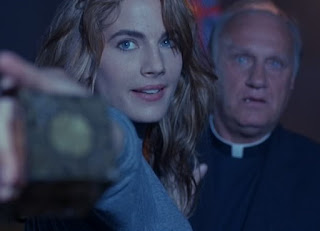 Joey is actually a pretty cool heroine. I liked the smart aleck side of her that we see in her first scene, and throughout the movie, she remains inquisitive and brave, but never really all that stupid, even when she is tricked by Pinhead. She not only gets to call Pinhead an "ugly fuck" (hey hey now, girl) but also gets to be the only or one of the only people to actually call him Pinhead, I think. I'll find out when I refresh on the rest of the movies. Bradley has a lot more screen time in Hellraiser 3 and a lot more dialogue. He doesn't go full Freddy Krueger with cheeky puns and shit, but he gets damn close sometimes. His voice is also just a bit different sounding sometimes, and his look - especially just his head - is weirdly monochromatic, and I don't think I really dig the fleshy color as opposed to the white. At the same time, though, he's still Pinhead and he's still awesome. 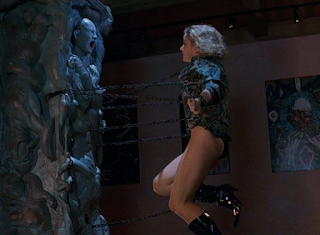 As gory as the first two Hellraiser films were, there was a weird respectability and beauty to the way they were handled. Here, things start to get a little skewed in that regard, and there are more random deaths of random people just for the sake of upping the body count. Not that that's not awesome, though. I loved some of it. The first gag is at the hospital when Pinhead's chains somehow make a guy's head explode. The next gag is definitely my favorite - one of JP's one-night-stands gets too close to the statue and is hooked, then flayed alive and sucked into the statue. Later, there is a bigger sequence where Pinhead slaughters a bunch of the club-goers in various interesting ways. Also some very lame ways. I'm not sure how I feel about seeing Pinhead looking like a rock star in a club, but I guess that's just the vibe of this movie. 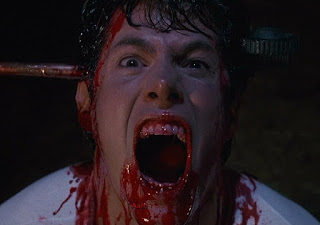 Also when speaking of effects, Hellraiser 3 sees the creation of some new Cenobites with really cool, if not a bit hokey, looks. Joey's nice cameraman doc has a camera imbedded in his skull; the disc jockey at JP's club The Boiler Room is impaled with all these CDs; and the bartender carries around a shaker cup full of gasoline and can breath fire. JP and Terri also become Cenobites At the end, Spencer and Pinhead become one person again, and there is an effects shot of their heads twisting and molding together. Not bad, not bad. The setting of New York City also sets up some new action sequences, like the part where Joey is running through the (strangely empty) streets and then meets up with the new Cenobites.
Gah, there's actually a lot more to talk about with this one than I initially thought. I like the story a lot because it builds well upon the events of Hellraiser 2, when there was that moment of sympathy for the Cenobites and the human beings that they once were. Bradley's portrayal of Spencer helped bring forth more of this sympathy, and was a nice contrast to the gleeful evil of Pinhead.
I'm gonna go out on a limb and say that I'm a fan of Hellraiser 3. It's a sharp left turn from the tone and the goals of both its predecessors, but it's pretty good. I like the protagonist and the story was a good progression, despite the odd cast of characters that the movie surrounds itself with. Three down, six to go!
Sidenote: The Motorhead song "Hellraiser" plays during the closing credits, and that was actually my first time hearing it! Nice!

Posted by Michele (TheGirlWhoLovesHorror) at 2:13 PM