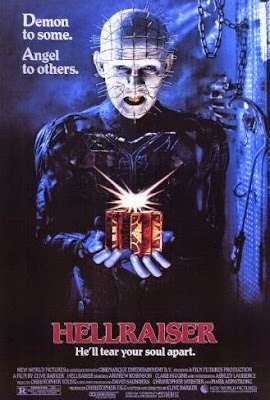 That's right, guys. IT HAS BEGUN. Welcome to the beginning of my journey through all nine of the Hellraiser movies! I do have vague memories of some of the sequels, but I haven't watched any of them in a long, long time, so a lot of this will be like a first-time viewing for me. The original film, however, is still one of my favorite horror films of all time. And I have never really talked about it much on here, so I'm excited to get the chance. AND Clive Barker's new book about Pinhead, The Scarlet Gospels, comes out in a few days so it's perfect timing. Shameless plug: Be sure to look for my review of The Scarlet Gospels on Wicked Horror.com! 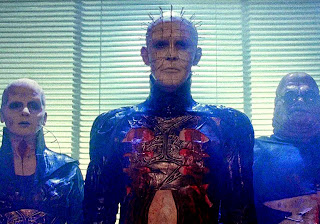 As most of you already know, Hellraiser is based on Barker's short novel, The Hellbound Heart, and Barker both wrote and directed the film adaptation. I don't think it's wrong to assume that that is one of the reasons why the film is so good, and why it has stood the test of time. Anyway, you all hopefully know the plot of Hellraiser so we'll forgo that. Let's just say that there's a box, there's a skinless guy, there're Cenobites, there's a chick saying "GO TO HELL!" Basically, it's awesomeness personified.

Hellraiser is a unique film for me because it is one of two films that I absolutely love and have seen a million times, but that also completely grosses me out still. Cronenberg's The Fly is the other one. That whole sequence of Frank growing out of the floor is fucking disgusting, you guys, and his evolution after that really doesn't get any better. I guess it's because both of those films showed me that humans really are nothing more than meat and bones, really, and that kinda sucks. That's what horror films do well. In Hellraiser, there is beauty in the horror, and logic in the fantastical, and intrigue in the deceit. 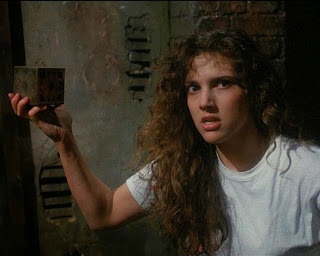 I hardly know what to say about Hellraiser because there is so much to say. Let's just go with some of the reasons why I love the movie so much. One of those reasons is Clive Barker's story. I admittedly have not read much Barker (which I will remedy eventually - I bought a bunch of his books recently) honestly because I didn't ever think that I could follow his stories because they are so out there and fantastical. But I get Hellraiser. Pushing the limits of human endurance with pleasure and pain, getting more than what you asked for, relationships fueled by lust and desire, a daughter trying to save her father - Hellraiser could be a hundred different movies with these same themes. It just happens to be gory good horror story with rad characters, created by one of the most imaginative minds of our time. 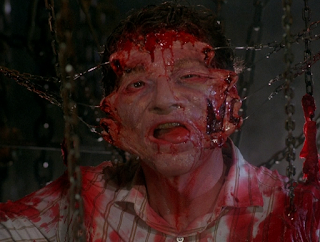 Another reason I love Hellraiser is the gore and special effects, which go hand-in-hand with Barker's filming style. That sounds like three reasons rolled into one but I don't care. Some of the effects are fairly rudimentary - most notably, the closeup shots of the hooks impaling Frank's skin - but overall, the practicality of the effects makes them so much more effective and wonderful. The aforementioned sequence of Frank's body growing and rebuilding itself out of the floor is my favorite/least favorite part (it's SO GROSS) but there's also Julia's death, Frank's death, and all the demons. Pinhead is just awesome, there's no need to go on for too long about him; the Female Cenobite is graceful and elegant despite her odd appearance; the Chatterer is deceptively amusing and I love the design of him (I have never understood the fingers in Kirsty's mouth - was that just to be a freak or what?); and Butterball always reminded me of one of those fat Italian guys in Mafia movies so I have a hard time taking him seriously. The Engineer (the monster that chases Kirsty down the hallway) is also a great design, and looks like one of those monsters that would come out of a child's imagination. 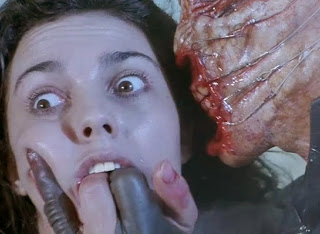 Another credit to the film is the great casting. Andrew Robinson as Larry is great at first as a typical dad, but then makes a wonderfully creepy turn as Frank when he takes his skin. Clare Higgins has a gorgeous face and a grace to carry it (damn those 80s fashion choices, though), and she gives Julia all the traits that actually make her a fairly complex character who just ends up making the wrong decisions and giving in to lust. Sean Chapman is Frank, the douchebag that started all this, and though I don't understand the physical attraction, he is the movie's representation of pure lust and desire, the idea of the wants of the human mind overtaking what someone knows they shouldn't do. And of course, Ashley Laurence breaks the mold as a pretty awesome heroine who doesn't take shit, and not only stands up to the Cenobites, but also cleverly figures out a way to work with them in order to spare herself. And when they still try to take her at the end, she again figures out how to save herself and send them back to Hell. Kirsty is foul-mouthed and fierce and I love her.

Although it does freak me out a bit when I read The Hellbound Heart because there she's just a family friend who has a crush on Larry, and in the movie she's Larry's daughter.

Hellraiser is a film that will probably forever remain on the list of my top horror films no matter how much any of the others change as the years go on. It is a timeless story, really, with characters and themes that will always be relevant, and villains that will always be icons in the genre. And now, be prepared to join me on the possibly treacherous journey through the sequels!

Posted by Michele (TheGirlWhoLovesHorror) at 9:42 AM