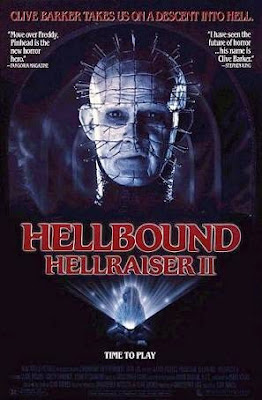 From what I remember, this might be the end of the good when it comes to the Hellraiser films. Gah, why can't I remember any of these save for the first two? I did randomly watch part 7 a while ago, and that was only because Kari Wuhrer is in it and she's also in Eight Legged Freaks and I love that movie so I was curious to watch her in a Hellraiser flick again. Anyway, Hellbound starts things off very well for the Hellraiser sequels. 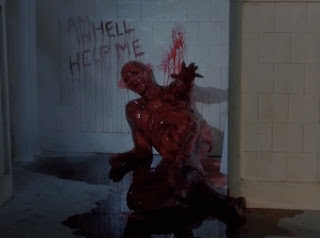 The sequel picks up right after the ending of the first film - actually, it starts with a montage that sums up the entire first movie which is totally cool with me because of course that movie is awesome. After the events of Hellraiser, Kirsty is back in the psych ward, which is run by Dr. Channard. Unbeknownst to Kirsty, he has quite the obsession with the Cenobites and the Lemarchand Boxes. Channard uses Kirsty to bring her stepmother Julia back from hell, and he uses another mental patient, Tiffany, to open the box and bring forth the Cenobites and enter hell.

The sequel's story begins with a quick glimpse into Pinhead's past. It's around the 1930s, 1940s and there is a soldier in a room, solving the puzzle box. The chains and hooks appear (more less-than-stellar effects shots like before but I still love it), and then he's shown in hell supposedly, having his skull cut on and the nails being hammered home. This becomes important later on, so pay attention. Having read The Scarlet Gospels recently, which is the concluding chapter in Pinhead's story, I don't think this is the background that Clive Barker had in mind for his character. But we're talking about the movies here, so I guess I'm going to have to let that go. 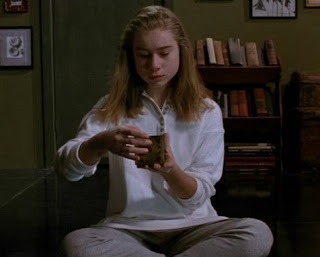 Again, there is a great cast of characters - except for one guy who is unfortunately not given that much to do. Steve from the first film has been replaced by Dr. Channard's assistant, Kyle, and frankly, he is rather boring. His only real purpose in the film is to spy on Channard, help Kirsty out a bit, and then get killed because he's an idiot. Dr. Channard himself is quite the interesting villain. We first meet him while he is performing some kind of freak-ass brain surgery, which immediately makes the audience weary of him, and you can definitely tell that he has ulterior motives when he is seemingly trying to "help" Kirsty. He does the things that he must do to achieve his goals, yet he seems horrified by it. Then again, by the end when he becomes a Cenobite, he seems to embrace his evil side. So yeah, interesting guy. The only thing that still niggles at me a little bit is the fact that Julia never asks this guy who he is or why he brought her back. Technically, they were both using each other but that's not a strong enough connection for me. 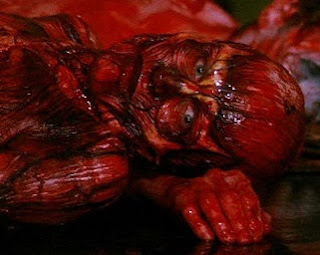 Julia herself is actually much more likable to me here, despite her villainy. She's stronger and more manipulative, instead of the one being manipulated. And of course her revenge at the end is fantastic. Though the film takes place directly after the first one (and was released just one year after the first one), Kirsty also seems to have grown. She's still incredibly brave and formidable, but there's something about her that's just slightly different and more mature this time around. Also, she puts on Julia's skin suit. That's really gross and really rad at the same time. Imogen Boorman as Tiffany is incredibly sympathetic, innocent, and does a wonderful job with practically no lines of dialogue. Her obsession with puzzles was a nice, though obvious, plot and character choice for the film and works well. 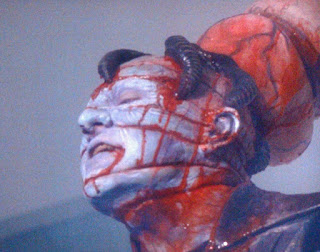 Hellbound is definitely one of those movies that I would describe as gore-geous. In the scene where Julia is resurrected, there is buckets of blood and oodles of nastiness. It starts off with the delusional mental patient slicing the shit out of his flesh because he imagines that he is covered with worms, and his blood on the mattress where Julia died is what brings her back. She is skinless like Frank was, and spends the rest of the scene rolling around in blood, trying to get the nourishment from the mental patient. Non-horror fans would perhaps watch something like this and be grossed out, but I watch it in utter fascination every time. It's beautiful. The full-body effects work on Julia where you can see the bones, tendons and muscles is amazing, and the blood is so shiny! Its darkness and richness also plays in great contrast to the whites of her eyes. And I love, love, love Channard as a Cenobite. His look reminds me of one of the monsters from the video game Resident Evil 4 (the best video game ever, by the way) and he's so wicked and "punny." It's fantastic.

Ah, this has already gone on long enough, and I think I hit most of the high points, but this is one of those movies where I could really discuss every single scene. Hellbound is a really solid sequel to one of my favorite horror films. It plays up the strengths of the original, and then takes it just a step further, which is what I think any good sequel is supposed to do.

Posted by Michele (TheGirlWhoLovesHorror) at 5:49 PM