Yes!!! Here we go, horror fiends, with the monster TFW posts! This year was my third time attending Texas Frightmare Weekend and it was just as amazing, wonderful, fantastic as the previous two years. But, this year was maybe a bit bigger and more exciting because Frightmare was celebrating its 10th year in existence, and founder Loyd Cryer really knocked it out of the park with all the amazing guests he lined up.
My personal experience was also enhanced a lot more because I not only snagged myself one of the coveted VIP passes, but I was also able to get a room in the host hotel. The previous two years I stayed off-site, so I missed out on the late night parties and other convention shenanigans - but not this year! This year I tried to be there for almost all of it to really get the full TFW experience. Here's some pics of my awesome VIP swag bag. 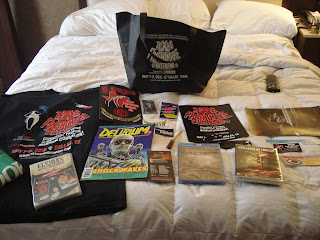 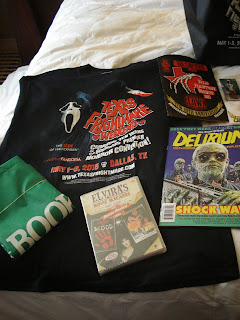 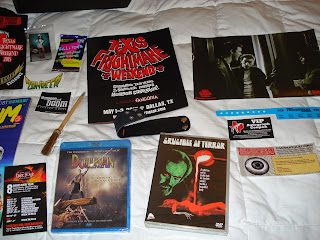 Alright, enough of that. Let's get into all the cool shit I got to do.

Friday night I had a photo op and a screening to attend, plus I had to scope out the vendors and make mental notes of what I wanted to buy. I wanted to save all of my more anticipated meet-and-greets for Saturday when things were more exciting, so I just got a few of the "smaller" (for lack of a better term) guests this first night.

First up was director Don Coscarelli. I know he was there for the Phantasm reunion that they were having, but I am sadly not a Phantasm fan! I've only seen the first film. Anyway, Don was an amazing first meet of the convention. I handed him the Bubba Ho-Tep picture I picked out for him to sign, and all I had to say was how much I loved the movie before he starts telling me stories of what Ossie Davis was like on set. We also discussed the odd but awesome tone of the movie. When I told him that Incident On and Off a Mountain Road was my favorite Masters of Horror entry, he said he really appreciated hearing that because he was nervous about being in the company of so many other amazing horror directors for that. No need, Don, your film was amazing! Don was so incredibly nice and he gave every fan in his line a great conversation, and that's the kind of celebrity I always appreciate at cons. Wonderful guy! 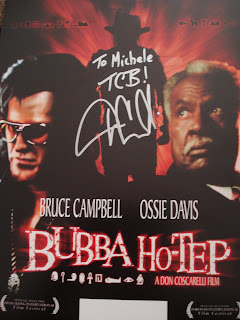 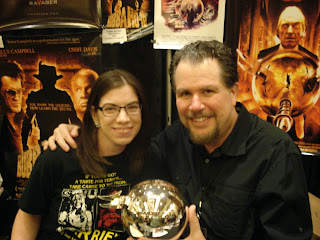 ...and an action shot with the Phantasm ball. 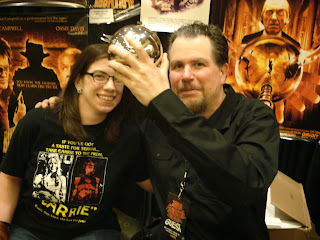 Speaking earlier of Masters of Horror, my next meet was an actor in my really-close-second favorite entry. I'm sadly not as familiar as I should be with Udo Kier's earlier work, but I have loved seeing him in stuff like Blade and Halloween, etc. One of my favorite horror scenes of all time is in John Carpenter's Cigarette Burns when Udo is feeding his own intestines into the film projector, so I was really hoping that he would have a Cigarette Burns picture at his table. And, lo and behold, not only did he have a picture from that movie, but the picture was of that very scene! Ah, it must be fate. Udo was also a very cool guy. I love his accent. 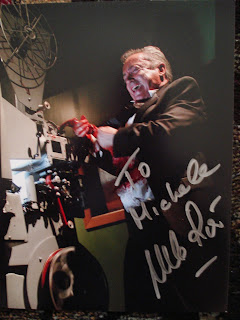 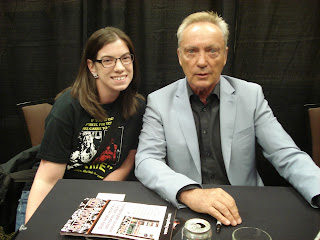 I was very undecided this year about what order I wanted to do my meetings because I had SO FREAKING MANY OF THEM to do. So I stopped at my favorite poster vendor - they have the best deal on 11x17 prints at buy 3, get one free - and spent what felt like an eternity trying to pick out the four I wanted. One was a Hellraiser poster, and one was pretty cool because it was a "Stab" poster, in honor of the guests from Scream. The other two are ones that I got signed later, including my next meet and greet with...
...Camille Keaton! Very excited and honored to meet this lady, and she was so sweet and conversational. She also liked the sparkly skull earrings that I was wearing, so bonus for me! I told her that she should be so proud of herself, obviously talking about I Spit on Your Grave, and she gave me a wonderful smile and "thank you" for that. I also gave her praise for What Have You Done to Solange? and she gave me a great signature and picture with her! 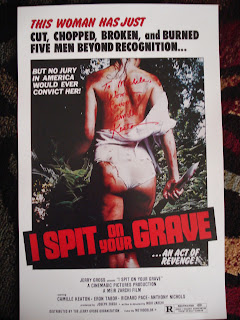 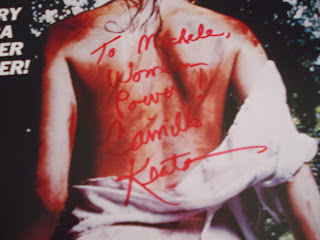 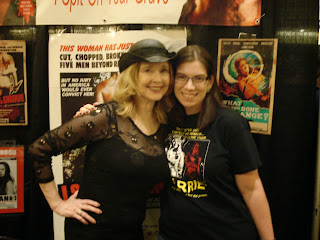 The two big headliners this year were Neve Campbell and Skeet Ulrich. Neve wasn't allowing pictures at her table because they thought she was going to be too busy, so I got a professional photo op with her and Skeet because he was also going to be wearing the Ghostface costume for the pics and that is just fucking cool. When I walked up to get in position between them, Skeet noticed my Carrie t-shirt and says, "Carrie?!" I'm not sure if that was an exclamation of disapproval or what, but it was still pretty funny. And our picture came out awesome! 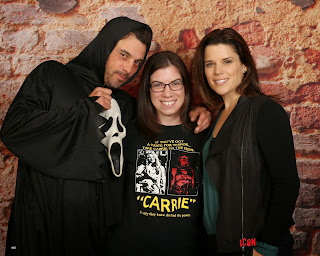 Time for some food and then the first of two movie screenings I went to this weekend. I was actually strangely excited for Gutterballs 2: Balls Deep, because while the first one was a bit much in some parts, overall I could appreciate the campy craziness of it. Director Ryan Nicholson was there to introduce and talk about the movie, and he told us that we were the first audience to see it and that it was mostly a rough cut (uh oh) and that the last third of the movie wasn't going to make a whole lot of sense (double uh oh) and that it got very nasty and brutal at the end. Oooookay. He was definitely right. The look and feel of the sequel was pretty much the same as it was for Gutterballs in the first part of the film, but yes, there is a point where the movie goes off in crazy direction and then just ends with a lot of sexually brutal stuff. I didn't really hate or love Gutterballs 2 - there were some interesting trippy scenes - so maybe I'll have to see it again when Nicholson is done with it. Gutterballs 3: No Holes Barred (OMG) is apparently coming in 2016. 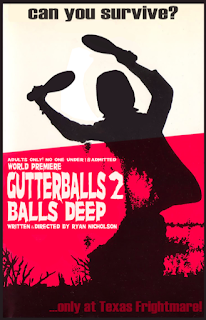 Normally this would have been the end of my Friday night, but since I was staying at the hotel this year, I finally got to go to the Friday night party, which they always make some special theme for whoever the guests are that year. This year they had the Phantasm Ball (haha), and because Gutterballs 2 started at the same time as the party, I missed whatever craziness happened at the beginning. I was there for the costume contest, and some guy dressed as the Babadook won. I imbibed a little and danced a little and stayed up way too late even though I knew Saturday was going to be a long ass day. Oh well. It was a lot of fun! 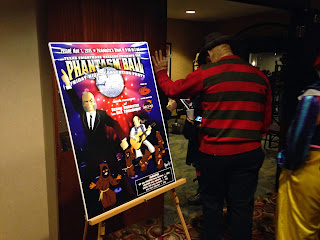 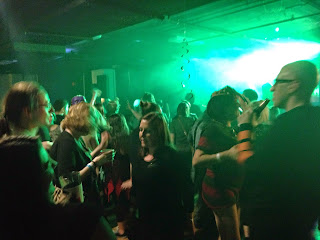 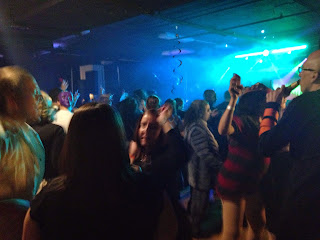 Oh, but all this isn't even close to the amount of awesome that I would experience this weekend! Saturday was the most amazing day, so definitely stay tuned for that!
Day Two is now available HERE!
And go HERE for Day Three!﻿
﻿
Posted by Michele (TheGirlWhoLovesHorror) at 8:11 AM