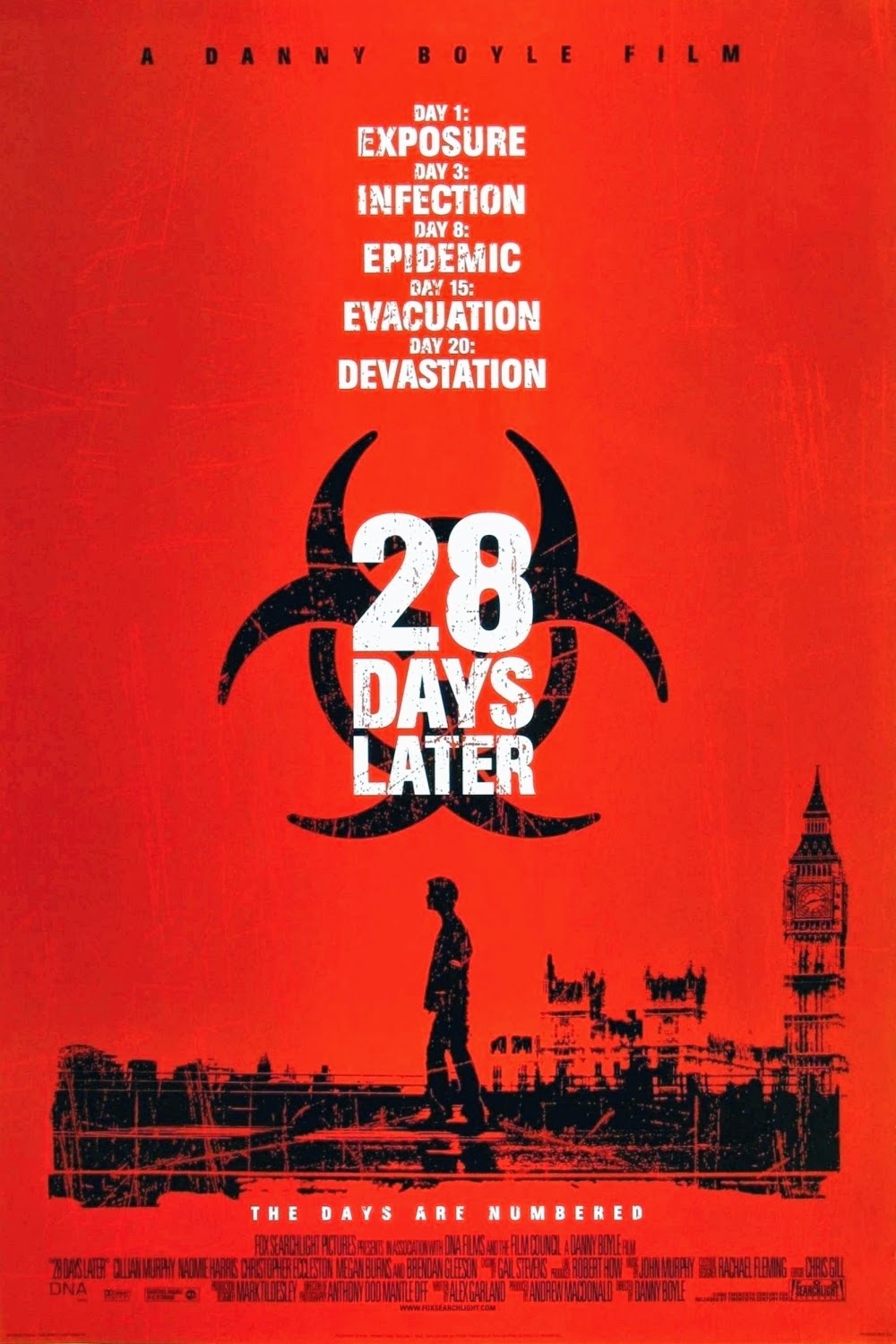 28 Days Later is one of those films that I only remember watching once or twice, despite its immense popularity. Catching up on it now, it's still not exactly one of my favorites, but I can definitely see why people love it. Simple and inventive, 28 Days Later is a wonderful post-apocalypse story that is very effective, even despite some flaws. 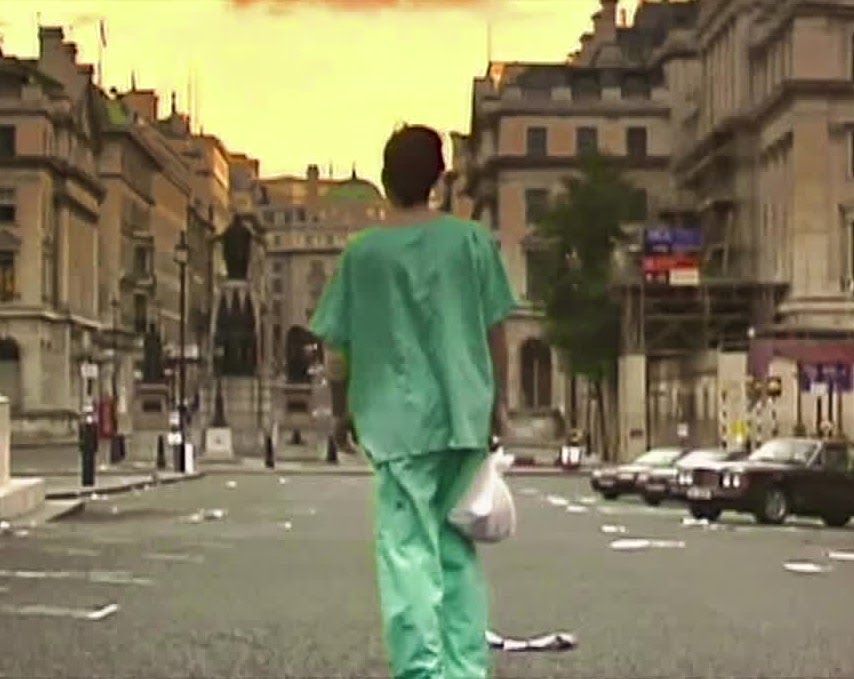 A group of animal rights activists breaks into a research facility to rescue chimpanzees that are being experimented on, and unwittingly release a dangerous virus of pure rage onto the populace. Twenty-eight days later, four survivors navigate the desolate country, trying to find a safe place to stay.

One reason 28 Days Later is impressive is because at least most of the movie was shot on DV. More convenient than huge film cameras, director Danny Boyle used DV cams to achieve some of the shots that they needed to get quickly. There are many parts where the lesser quality hurts the movie, simply because DV will never look as beautiful as film. It's disappointing, but the style quality is there. There are many different locations over the course of the movie, and Boyle uses them all to their full potential both visually and emotionally. He makes a simple shot of a family of horses running through a field almost bring tears to the eye, and turns an elegant mansion into a creepy house of horrors. All the makeup effects are realistic and beautiful in their own way - I like the simplicity of the use of the scary red eyes on the infected. 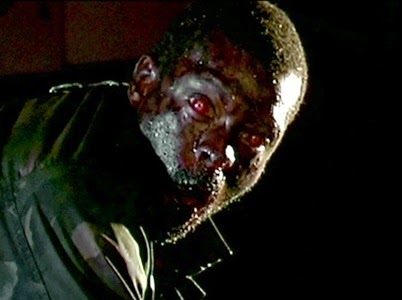 Cillian Murphy is our mysterious leading man Jim, who is buck naked when we first meet him. There are some wonderful iconic shots of deserted London as Jim wanders around, not knowing what happened and looking for any other signs of life. Soon, he meets up with survivors Mark and Selena, and then later the core group becomes Jim, Selena, Frank, and his teenage daughter Hannah. Each character has qualities important to the story and traits that play off of each other. Frank plays as the father figure to them all, and Hannah is no useless little girl, as she is quite defiant and skillful. Cillian's gaunt body makes Jim look weak and in comparison to Selena, who saves him from a group of infected, he is. However, when he is put to the test by the military guys who threaten Selena and Hannah, Jim proves that he can be quite vicious and cunning, and then coming full circle back to the caring and sensitive guy he started out to be. I've been thinking about doing a little thing on Unsung Heroines of Horror and if I did, Selena from 28 Days Later would most definitely be on the list. When Jim first meets her, she is very cold and unfeeling, constantly reminding Jim that she will let him and anybody else die if she has to, and only concentrating on surviving day to day. It's almost kind of annoying to me how rude and inhuman she is. When Frank and Hannah come into the mix, they truly affect her and her soft side comes out here and there. She's a badass when she needs to be - the best example is when she dispatches of her companion Mark with no hesitation after he's been infected.

One thing that is constantly brought up when talking about 28 Days Later is the debate over whether the film is a "zombie" film or an "infection" film. People seem to be pretty adamant one way or the other, but even after watching the film again, I can't make the call. It's obviously not a zombie film because the baddies are not zombies. There are no reanimated corpses or people rising out of graves. Though it is unclear how they kill, there is at least no talk of the eating of human flesh or brains. The people that call it a zombie film, though, still have the right to say so because the scenario is pretty well identical to a zombie apocalypse story. The baddies themselves might as well be zombies based on the way they act and the way the infection is spread. So I'm staying on the fence in this debate - whether you say "zombie film" or "infection film," I'd say you're essentially both right. 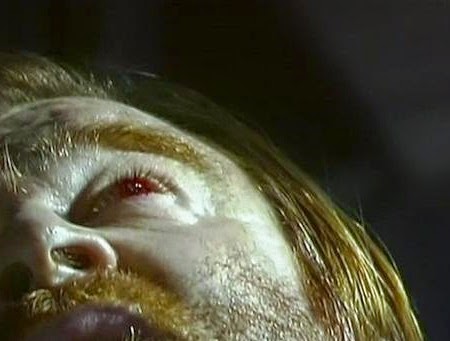 Possibly my favorite part of 28 Days Later is Frank's infection. It is the one part of the film that I have always remembered over the years simply because of how random, unlucky, and genius it was. A single drop of blood from a dead infected body falls into his eye - no attack, nothing violent, just really shitty luck. The infection's quick turnaround time hardly gives the audience time to mourn the loss of Frank, who is just one of those really good guys with a big heart. Frank's demise represents what I've always thought was the real bitch of zombie stories - you can fight hard and survive a long time, until a single bite, one wrong move, can suddenly be the end of it and there is no way to change it.

28 Days Later is not a personal favorite, but I can feel where the love is coming from. There is real talent behind the story, filmmaking, and acting - all three important components of a film coming together to create something that is a welcome addition to the horror and zombie (or infection) genre. Focusing more on morality and emotion than pure violence, 28 Days Later is definitely one that will be remembered for a long time.

Posted by Michele (TheGirlWhoLovesHorror) at 7:30 AM