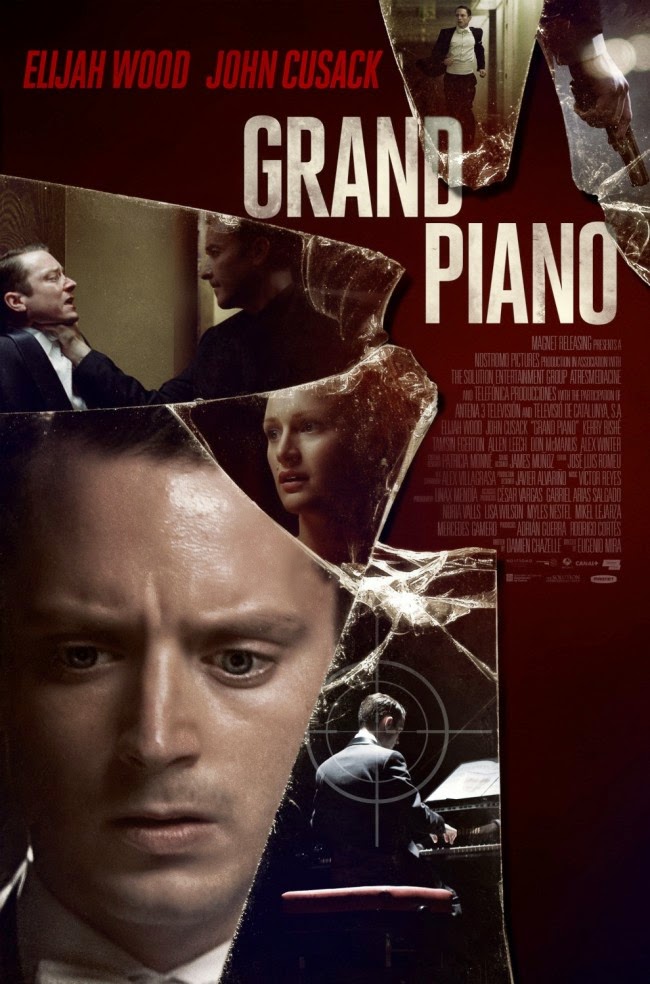 Like everybody else, I have more than a few flicks that are guilty pleasures for me - usually movies that are pretty universally hated by most, but adored by me. I have no problem admitting my guilty pleasures, and one of them is 2003's Phonebooth. Goodness yes, I love Phonebooth. So when I heard that this movie Grand Piano had a similar story, I knew I was going to be all over it at the first chance. Let's see if it lived up to expectations. 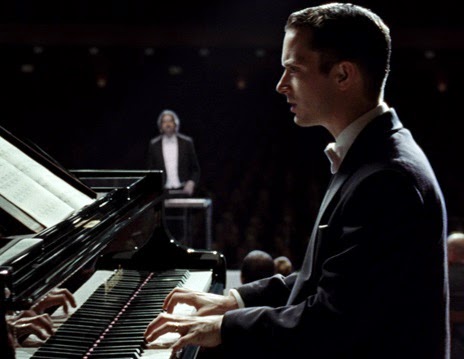 Elijah Wood plays Tom Selznick, one of the world's greatest living pianists who is returning to the stage after a five-year hiatus. In a theater full of hundreds of people, Tom is contacted by a man with a sniper rifle who warns him that if he plays one wrong note, he will shoot him, and also threatens to shoot his wife, who is in the audience.

Grand Piano is certainly not without its flaws, but it can be enjoyed in spite of them. For one, the story is taut, able to cram in all the necessary information in an easy 90-minute package that flies by. There are no frivolous or unimportant scenes, and though none of the characters except Tom are fleshed out all that much, they actually don't matter that much. Grand Piano is a situation movie, at times an implausible situation movie, and it's the situation you want to see played out and not so much the characters. That's not a bad thing at all, and actually made the movie much more interesting than it probably should have been. 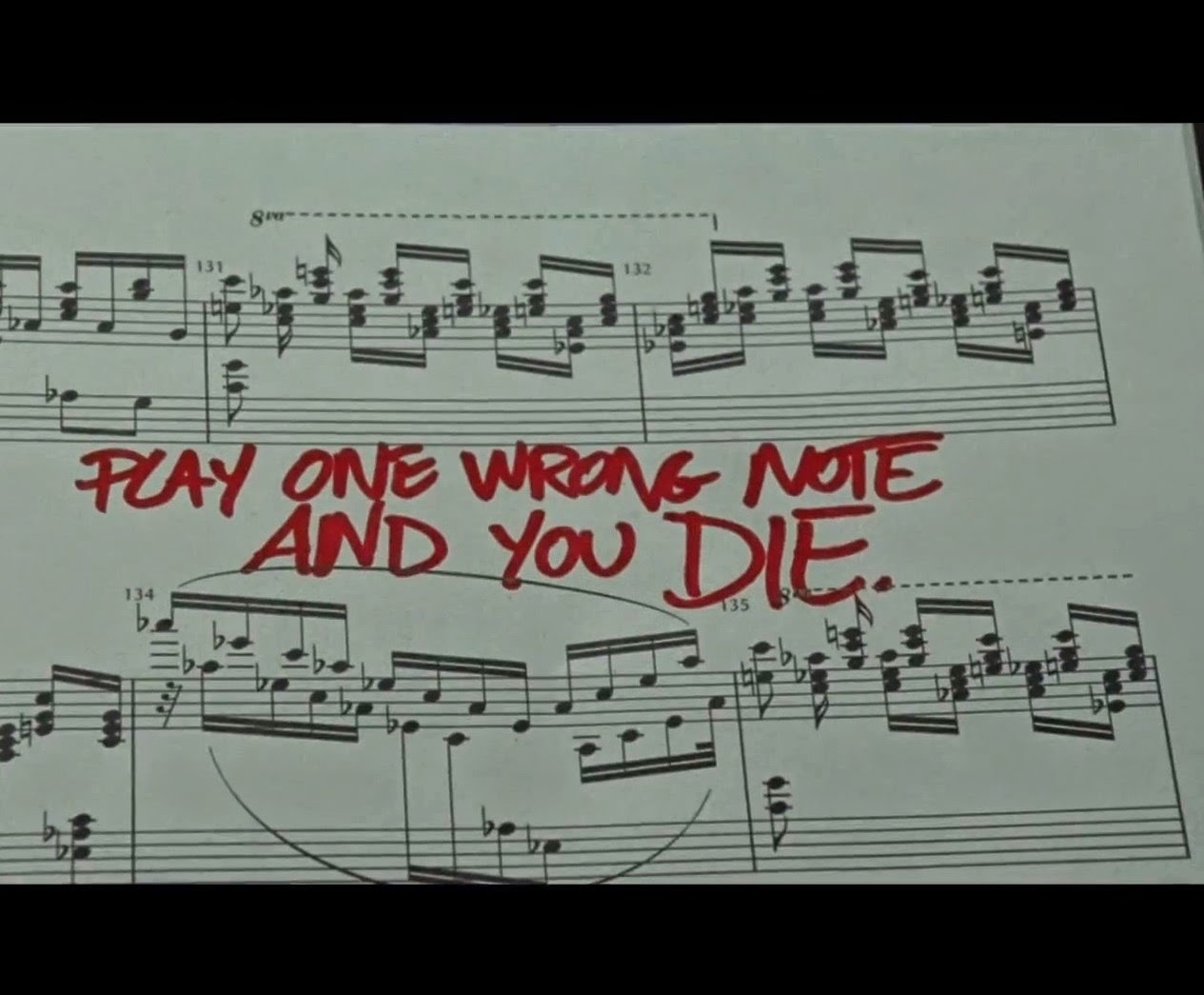 Another reason to love Grand Piano is that it is gorgeous. The director and cinematographer make magnificent use of the camera and the somewhat limited location. The setup of the piano on stage is striking, with the bright red carpet underneath, mirrored by the red curtain in the background that looks like it is bursting out of the piano itself. You really can't go wrong with using red in a movie, I always say - such a striking color, no matter what it's supposed to mean. There are lots of awesome camera angles to keep things interesting, and I loved all the sweeping shots while the orchestra was playing and the use of the reflection in the shiny piano for some shots, too. There is also one great tracking shot when Tom tries to contact his friend Wayne in the audience. As Wayne walks up the stairs behind the main theater area, the camera moves up into the balcony with him and then moves into a split screen with him in the hallway on one side and Tom on stage on the other side. All of this made Grand Piano a beautiful film to watch. 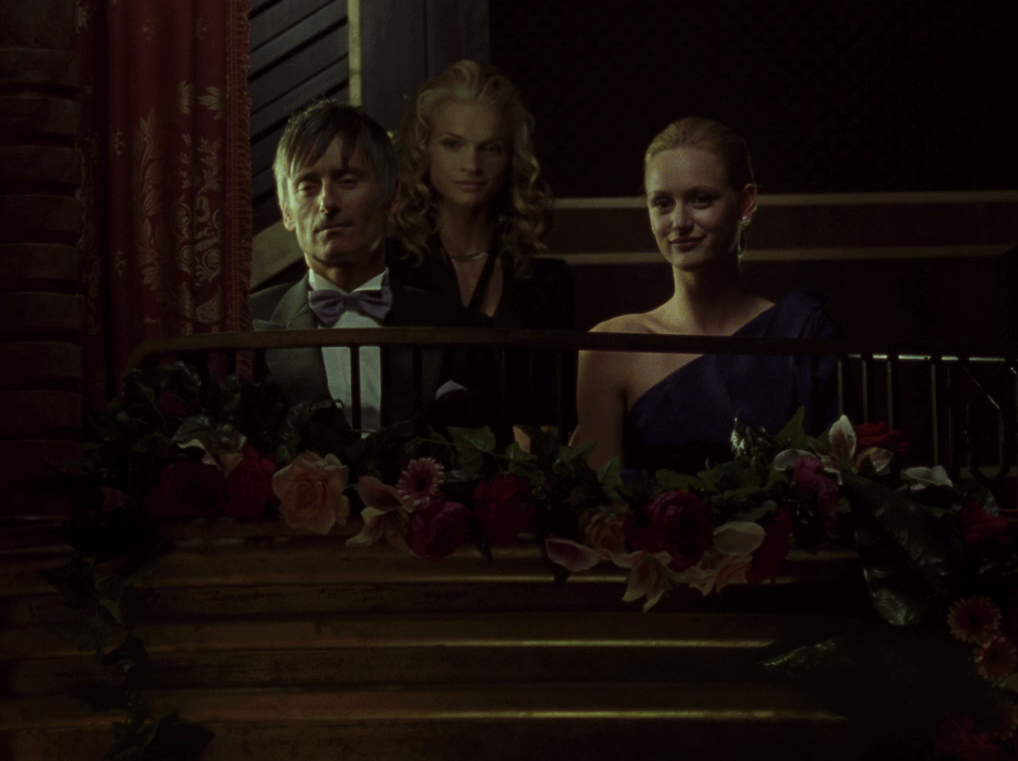 Elijah Wood is an actor that I am coming to respect more and more, and his performance here is perfect. His character is hard to read sometimes because he seems cowardly but is also a quick thinker, and Wood plays to all those traits with ease. Though I don't know jack about playing piano, to me it looked like Wood was the real deal, and I was actually surprised to see him in most of the more intense piano-playing sequences instead of a double. I was wondering where John Cusack was through most of the movie until about the one-hour mark when I was finally able to recognize his voice as that of the sniper's (and his voice is nowhere near as awesome as Kiefer Sutherland's was in Phonebooth). When he gets some actual screen time, I have to say that he's not completely convincing. Even after seeing him play a serial killer in The Frozen Ground, I still have a hard time with Cusack being the bad guy. Sadly, no one else in the cast is really all that noteworthy, they're just kind of there. 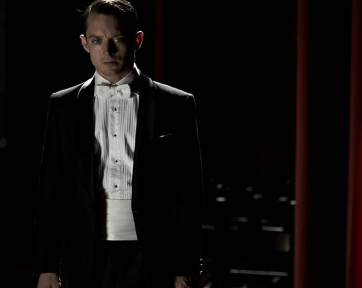 Like I said, the movie definitely has its flaws. I think most people have a problem with the
believability. One question I had was why they went to all this trouble when they could have stolen the piano. Maybe this was more fun? Another scene that was a little out there was when Wood was deftly playing a really involved piece on the piano while making calls and texting on his phone. I'm sure as a pianist he is very coordinated and agile, but the unbelievable part was how the guy with the scope on the sniper rifle did not see any of what he was doing! There was also the convenience of the bathroom under construction - perfect place for... well, watch the movie and find out.

Flaws aside, I loved Grand Piano. I love the look of the film and the joy that comes just from watching it, and I love Elijah Wood's acting. The ending comes tongue in cheek and with a wink and I always respect that. I still love Phonebooth and no one can ever talk me out of it, and now Grand Piano has shown me a new, beautiful, and fun way to do a similar idea.

Posted by Michele (TheGirlWhoLovesHorror) at 8:35 AM