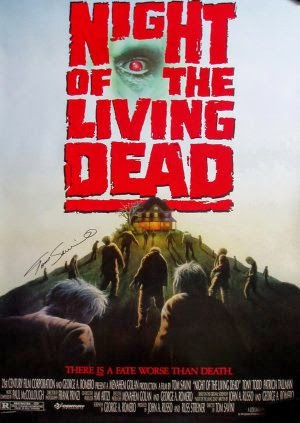 There are lots of movies on my horror movie "must-see" list. The remake of George Romero's Night of the Living Dead was always on that list, moreso just in a completist way rather than something really mandatory. Well, I ended up being immensely surprised at Tom Savini's feature film debut as a director, not only for its respect of the original but also for its respect of the zombie movie in general. 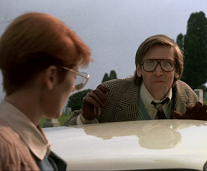 The plot is basically the same and starts out with brother and sister duo Johnny and Barbara arriving at the cemetery to visit their father's grave when they are attacked by a strange, shambling man. Barbara escapes to a nearby farmhouse and there meets up with several other people. Together they all try to fortify the house and survive the night as the hordes of the reanimated dead gather outside.

I'm honestly really impressed with NOTLD90, and for several reasons. Despite the fact that it is almost a shot-for-shot retelling of the story from 1968, the remake feels fresh and new. Savini's directorial eye is different than Romero's - where Romero used lots of interesting angles and took advantage of the shadows created from using black and white photography, Savini's approach is rather simple. He doesn't detract from the action with crazy camera movements or anything, and instead just makes something that looks professional and well thought out with what's on screen. It's simply a good movie telling a good, simple story and the simplest stories are always the best to me. 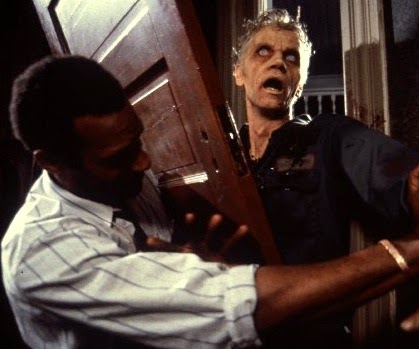 Another reason for the remake's success is the casting. It was nice that they kept all of the original characters and, for most of them at least, their personality traits and relationships are the same. The only big change is the character of Barbara - the shock stricken mouse of the original is replaced by a woman who removes her emotions from the situation to truly take charge and kick ass. Veteran Tony Todd takes on the iconic role of Ben, a role he seems to have slipped into with real ease and grace. It helps that he does physically resemble Duane Jones but mostly it is Todd's take-charge demeanor coupled with his sympathy and genuine care for the other characters (eh, most of them anyway) that again makes Ben one of the best characters in horror history.

The other thing about the remake that I was pleased with was the tone of the film. Though the dialogue is at times overly crazy when the characters are fighting, it never once goes through your mind that this is a cheesy remake with no redeeming quality. NOTLD90 is serious as a heat attack throughout and it was something that I really enjoyed and appreciated. It would have been too easy to go the route of the zom-com with hysterical female characters and zombie jokes. 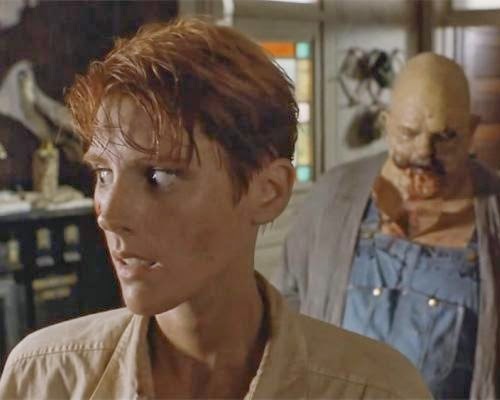 Roger Ebert and I don't usually agree on much but it seems in regard to NOTLD90 that we both had something to say about the ridiculous amount of hammering that occurs in the film. That's a nitpick, I know, but seriously, watch it again and really focus on the amount of time that almost all the actors spend hammering wood into the walls to barricade the windows. Move on to something else, please. Other than that, the only thing that slightly disappointed me was the fact that there was far less gore than I was expecting. Just slightly though, because again this lack of excessive bloodshed also helped in keeping the serious tone of the movie.

In a strange way, I did find myself missing the horrible and ironic ending of the original film when lone survivor Ben is mistaken for a zombie and shot. This is replaced by a scene just as poignant - when Barbara returns to the house to find Cooper alive and shoots him immediately, letting the good 'ol boys add him to the fire of other zombies outside. I loved how this was a nod to the beginning of Dawn of the Dead and didn't mind the change in ending one bit because it was the right ending for this version.

All in all, NOTLD90 is a very solid remake, one that makes changes in the right way and for the right reasons, while still keeping all the elements of the original that worked. It's a remake that should be mentioned more often as one of the most successful ones out there.


Also, did anyone else notice how strange it was that Barbara lost her glasses at the beginning of the movie but it never seemed to bother her the rest of the time? And that she was still a pretty good shot?Just food for thought.

Posted by Michele (TheGirlWhoLovesHorror) at 5:15 PM