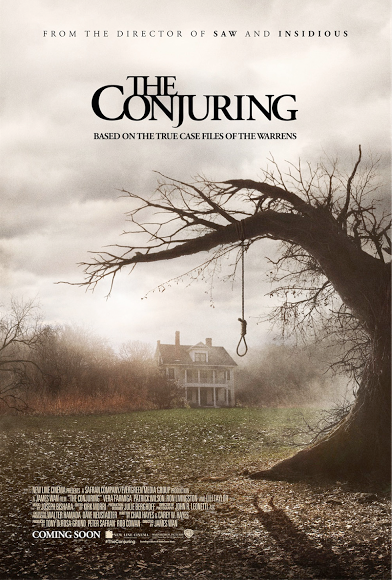 I've had a couple different readers now make the comment to me that they wanted to know what I thought about The Conjuring and said I should do a review. I actually did see the movie when it was first released many months ago, but I didn't do a review then for some ridiculous reason. Now I've rented it again and my feeling is still the same as that first creepy time in the theater. You all know I love ghosts, so fo' sho', I was all over The Conjuring. 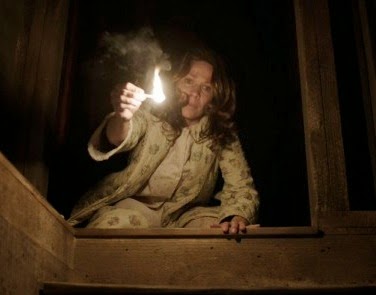 In 1971, Roger and Carolyn Perron move their five daughters into what is seemingly the perfect house in the country. But ever-escalating strange and scary occurrences lead them to believe that a very dark spirit haunts their land, and they bring in renowned paranormal investigators Ed and Lorraine Warren to help rid them of this evil presence before it is too late.

On my first go-round with The Conjuring, I actually missed most of the beginning of the film with the Annabelle story because whoever was driving got us there late. So instead of safe in a theater with 100 other people, I had to first experience the creepiness of the Annabelle doll by myself at home. Why do people (especially James Wan, who seems to have a strange obsession with dolls) need to keep reminding us that dolls are terrifying? We know this. But anyway, there's some good stuff in this scene and though it doesn't have much, if anything, to do with the main story, it was a good way to introduce the film and set the tone. I also loved that wonderful swelling music at the beginning, and how the title scrolled on the screen - big as life - after the text background information on the Warrens. 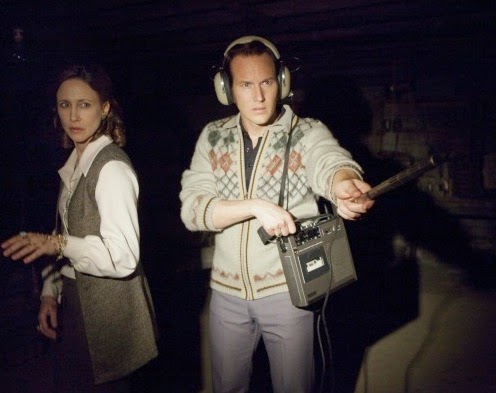 One thing I really liked about the movie is that it dually told from both perspectives of the people in the Perron family and the Warrens. Ed and Lorraine are just as interesting characters (and real life people) as the Perrons, so it was nice to see some of what they were really like as people away from their job. This also let the audience know that they were serious about what they do and not in any way fakes or charlatans. Perfectly cast as Ed and Lorraine are Patrick Wilson - one of my favorites ever since Hard Candy - and Vera Farmiga. Roger and Carolyn are played by Ron Livingston and Lili Taylor, and though each of the daughters gets a little moment in the spotlight, it's hard to keep them all straight, either character-wise or actor-wise. Let's just say they're all good. I like them. In a movie like this, I think the acting is always really key, and knowing that all these people were hired for their talent and their ability to actually play these real people instead of for their looks or current popularity was wonderful to see. 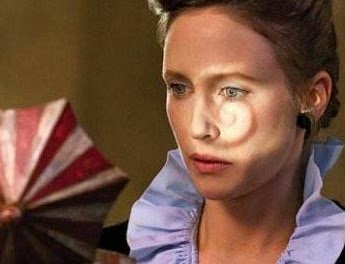 James Wan's direction is the main reason for the film being so successful at the spooky parts. Wan knows exactly where to put the camera in each scene to get maximum results from the audience, and how long to hold a shot before finally delivering the scare. Some stand-out sequences I have to mention are things like the fat woman holding Rory in cellar where her face is just out of focus; the extremely creepy shot of the hands coming out from between the clothes in the closet and clapping; and the scene that scared the ever-loving shit out of me - when the clapping hands appear next to Carolyn's face out of the dark. I also really enjoyed Wan's use of camera movement here. There are a couple of great zoom shots, and one really perfect sequence where the camera shot is upside down to match the POV of the girl looking under her bed, and then the camera flips up and around with her as she gets up. Really nice to see a director actually use some of those unconventional moves to keep things interesting. 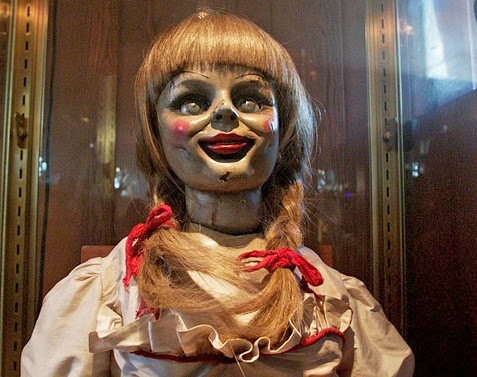 On my second viewing, though, I still didn't like the ending. After all the craziness of the climactic scene and the wreckage of this awesome house, I was again left with a heavy feeling of "that's it?". When Carolyn is stopped from killing her daughter by remembering how much she loves them all and then pukes out the spirit of Bathsheba, it was really touching and a good moment, but I had to think: did that really get rid of the spirit forever? It just felt like things were taken care of a little bit too easily and like the demon wasn't really exorcised or whatever. I'm no professional ghost hunter, though, so I could be wrong.

Touted by many movie-goers as one of or the scariest film(s) ever made, The Conjuring was not only a huge financial success, but also one that actually delivered the goods it promised. I think it respectfully portrays part of the real story of the Warrens while still doing its job of being creepy and unsettling. And with a sequel and a spinoff movie on the way, we'll see if lightning can strike three times.

Posted by Michele (TheGirlWhoLovesHorror) at 8:56 AM