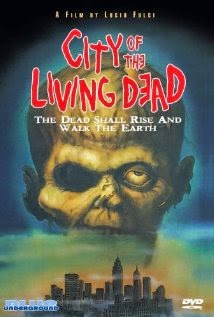 It is good to be acquainted with you again, Mr. Fulci. I believe we last visited during my viewing of The Black Cat, which was okay but not necessarily my favorite of your work (thus far, that is). It was certainly no House by the Cemetery, tell you what! I bumped City of the Living Dead up my queue recently because I was jonesing for what I hoped the movie would be. 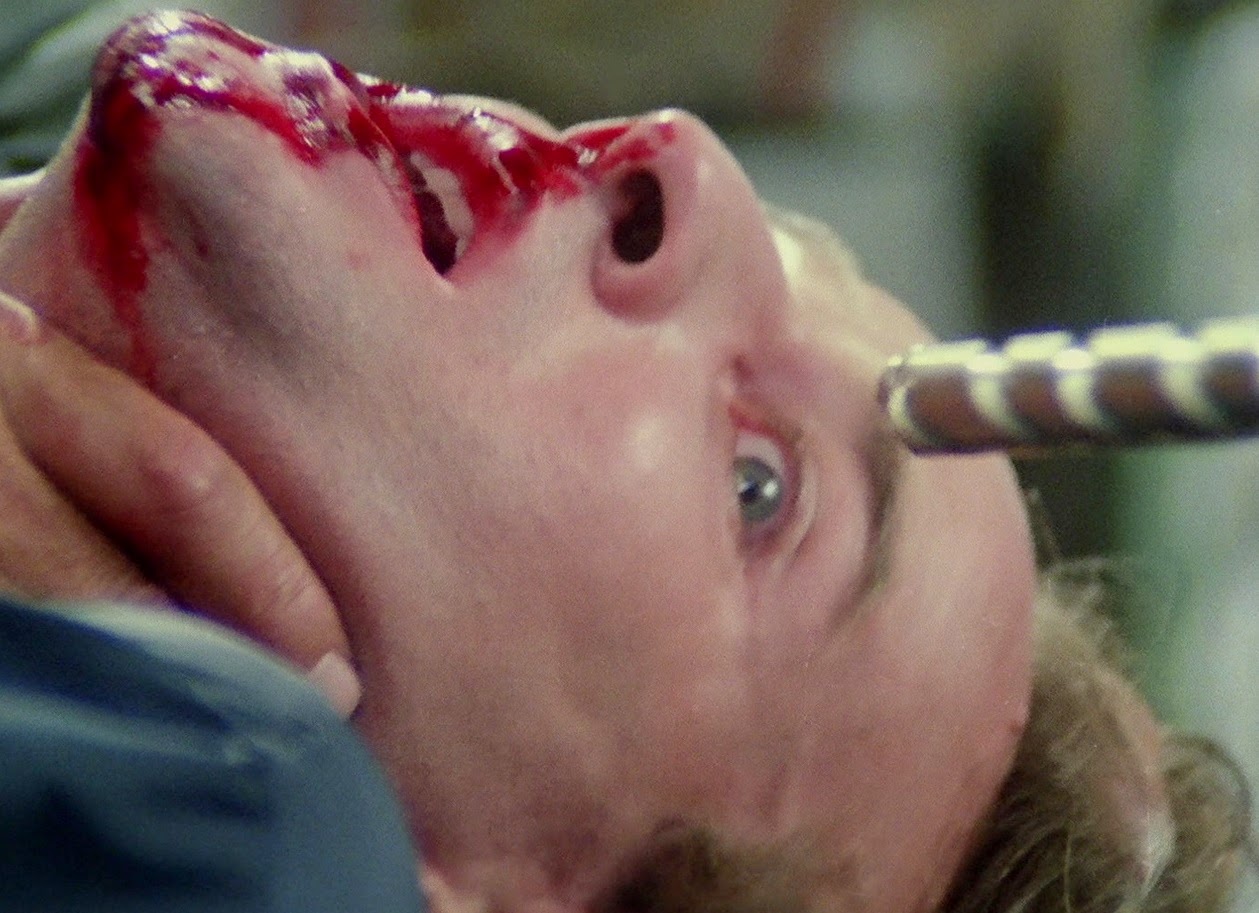 A priest's suicide in a cemetery in the small town of Dunwich causes the gates of Hell to open, and the recently dead to come back as horrid zombies. At the same time, a psychic in New York named Mary has a vision of these events and together with a newspaper reporter, they travel to Dunwich to close the gates of Hell before All Saints' Day, lest the dead never be free to rest peacefully.

So this is most definitely an odd one. Fulci somehow takes a zombie story and mixes it with elements of the supernatural - which shouldn't actually be that much of a stretch, but it is when you handle it this way. There's the obvious psychic connection to the other world with the character of Mary, but a lot of other random weirdness happens here. A bar is destroyed by something unseen. The living dead disappear and reappear seemingly at will, and seem to have a strange hypnotic power. Oh yes, we will be talking more about THAT element of the story later. Could some of this have to do with the fact that the ancestors of Dunwich burned women accused of witchcraft during the Salem trials? Is it a curse? I don't know, maybe. This is an approach to the zombie genre that I haven't seen before, and I'm not entirely sure if it works or not, in a long term sense. But for this one movie, Fulci at least makes it entertaining, even if there isn't much sense to be had. 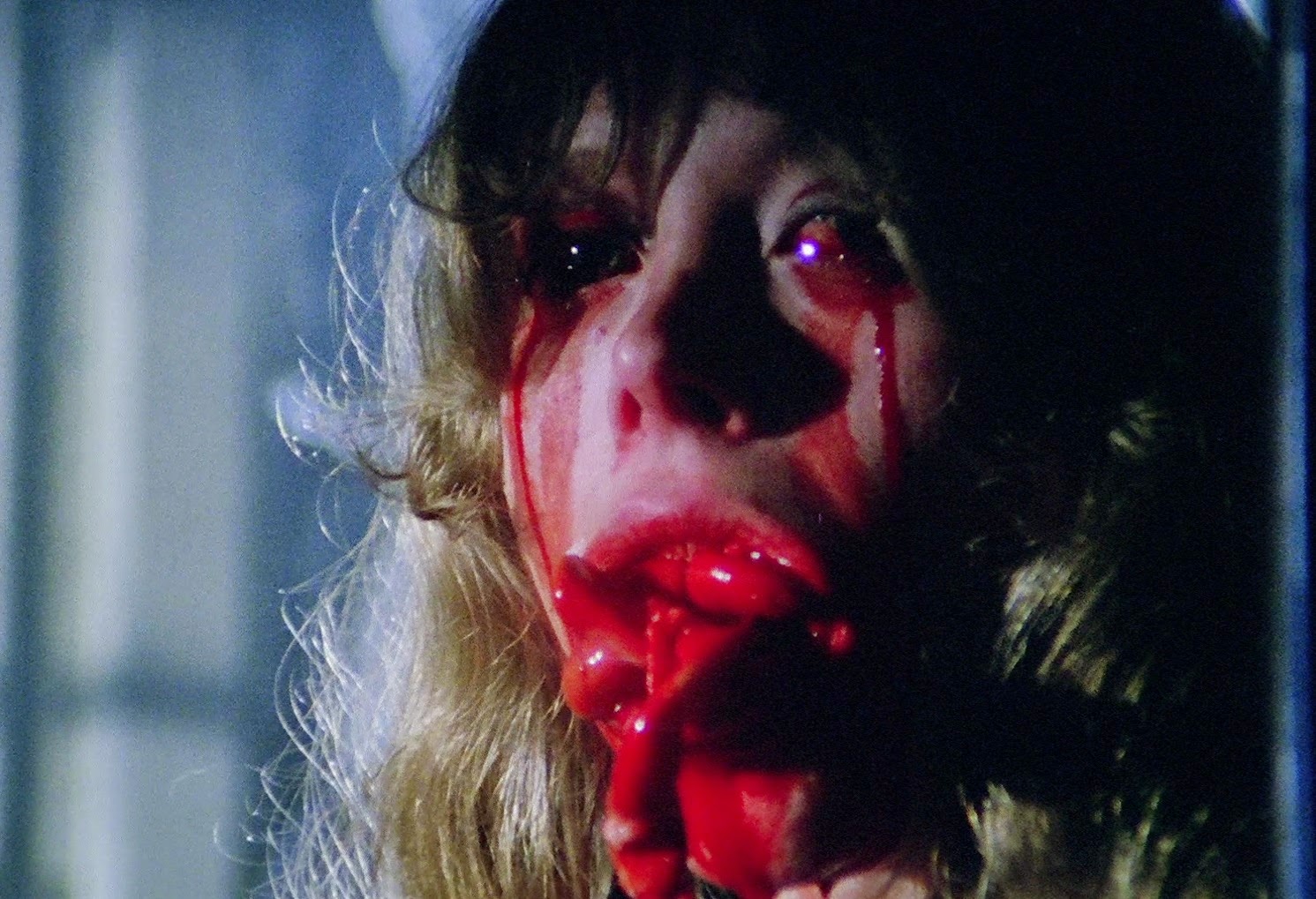 It's really all in the presentation, really. The way Fulci introduces the story is at times confusing. Transitions between locations and scenes are often unclear, and new character after new character are introduced with hardly an introduction. Eventually there comes to be a core four that make up the main cast - Peter the reporter, Mary the psychic, and Dunwich residents Gerry and Sandra (he's a psychiatrist, she's his patient). It is up to the audience to figure out that the other people that are randomly introduced are just other people in Dunwich that aren't really that important. Probably the weirdest side character and side plot is that of Bob, who has some kind of bad reputation among the locals because of his relationships with ladies - possibly criminal? Again, I don't know, and it doesn't have anything to do with zombies so who cares. 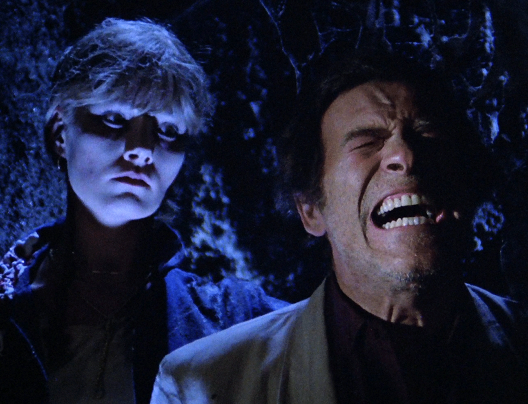 City of the Living Dead is certainly memorable in the gross-out and kill departments. Of course I almost vomited myself during the scene where a young woman is zombie-hypnotized by the dead priest. She first starts to bleed from her eyes, which was gross enough, but then comes the infamous part where she pukes up her internal organs. As a horror fan, I fucking loved that. Genius. My gag reflex, however, did not enjoy it so much, but that was probably the point, amirite? There are a lot of other great gags in the movie besides this one, too. My favorite was actually Bob's death by a drill through the head. There was really beautiful, seamless effects work on that one, and I loved how they showed it pretty much uncut. Also awesome were the couple of times when zombies would just rip off the backs of peoples' heads, skull and all - pretty effortlessly, I might add. I'm jealous of their hand strength. Strange as it was, the randomness of the maelstrom of maggots that come flying through the window was also... interesting. 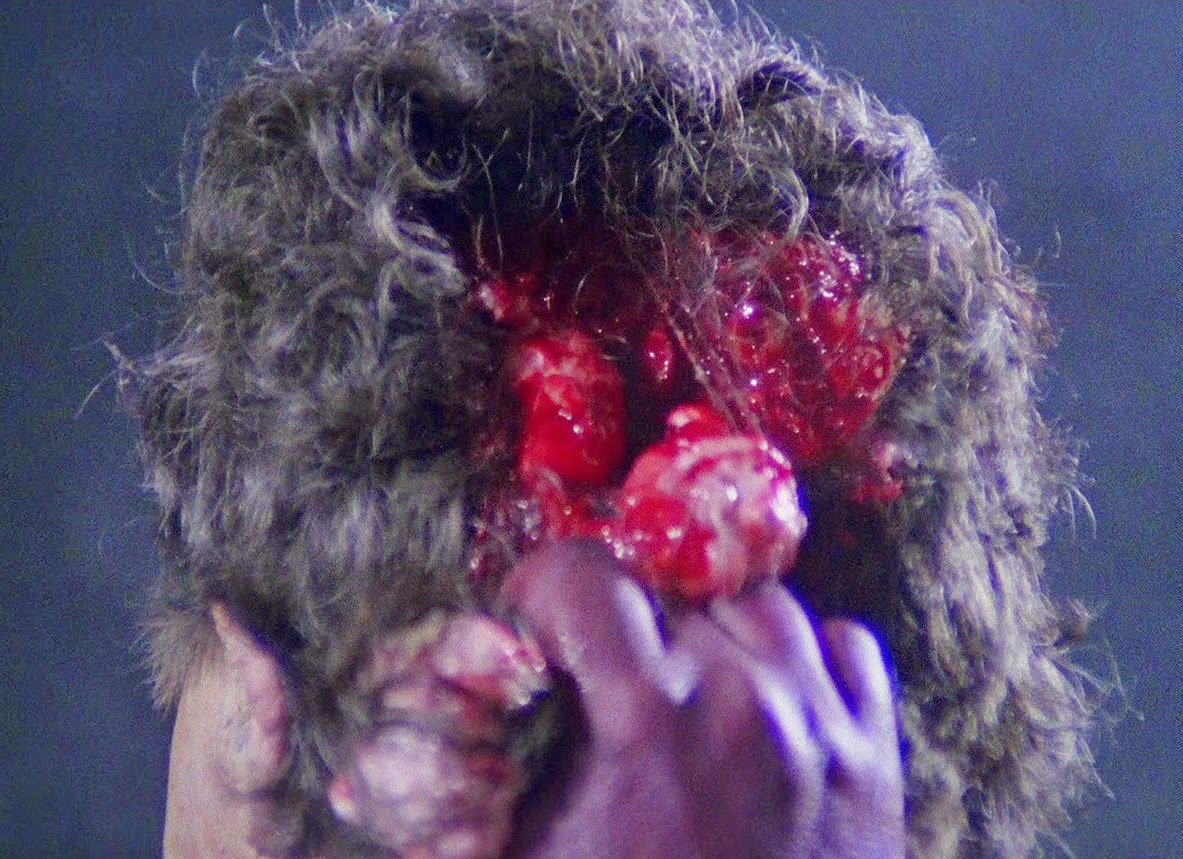 Couple other high points: the scene where Peter is freeing Mary from her coffin was hilarious. He had absolutely no regard for how hard he was swinging that pickaxe or where it happened to land on the coffin. Kind of strange, but great for a little tension even though it was comedic. I also dug the makeup on the zombies' faces, all gross flesh and wormy. For the finale, the group heads underground into the priest's crypt, and this was a cool location with awesome set design. During the burning sequence, though, there were a couple of wide shots that I could not figure out how they were possible because of the tightness of the location. Then the low point of the movie comes right at the end, when Mary and Gerry emerge from the crypt and John-John, the brother of a girl who turns into a zombie, comes running at them happily. For some unknown reason, they suddenly get scared and start screaming, and cracks appear on the screen and the movie is over and we are all left confused.

As for the rest of it, City of the Living Dead is a pretty badass outing from Fulci. I liked the different approach to the typical zombie story, and the gore was freaking amazing. This is one for fans not to miss, for sure.

Posted by Michele (TheGirlWhoLovesHorror) at 7:20 PM