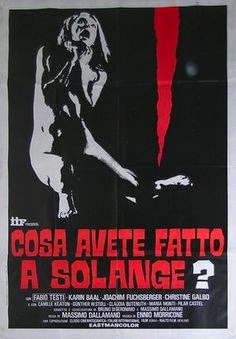 So, where are all the bad giallos? I honestly don't think I've come across one yet that I have not thoroughly enjoyed. I might have found this film eventually, but mostly it was added to my queue because of the involvement of one Camille Keaton, who plays the titular character of Solange. The only slight warning here is that you do have to wait quite a long time to actually see her. 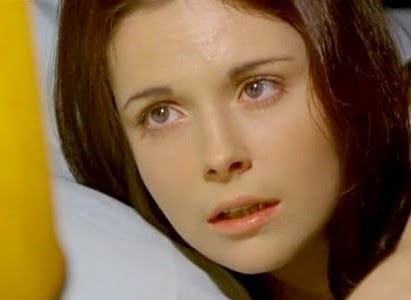 Enrico, a professor at a girls Catholic school is out having an affair with one of his students when the two become a part of the scene of a brutal killing of another young girl. More deaths soon follow, and though Enrico is initially a suspect, he becomes determined to find out who is committing these acts and why.

Okay, let me just get this out of the way. The movie was a bit more graphic than I was expecting when it came to the murders. With the first murder by the river bank - the one witnessed by pervy Enrico and his school girl fling Elizabeth - we see the girl running through the trees from the killer... and then comes the money shot. The girl's knees are parted and the black-gloved killer stabs her between the legs with a knife. That was bad enough. But later on, the police - for some ridiculous reason - show the pictures of the corpse to all the professors at Enrico's school, so I had to see that shit yet again. Oh but wait! For some other ridiculous reason, the police decide to show the girl's father the X-ray of his daughter's pelvis with the 7-inch knife all the way up her body. Seriously. I GET IT. Please stop showing me this stuff. I'm not saying it was unnecessary or anything, and at the end we find out why it is symbolic, but my lady parts hurt just thinking about it. 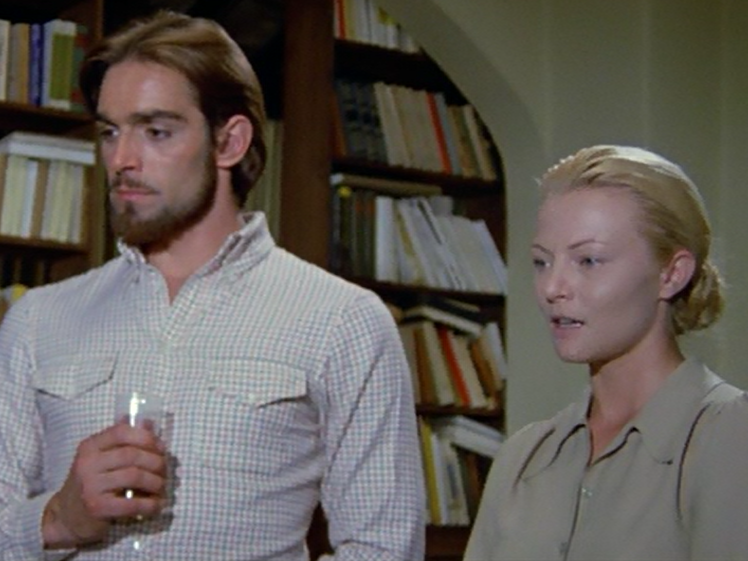 Traumatic female wounding aside, What Have You Done to Solange? is a pretty great giallo film. The plot definitely takes some more twists and turns than previous films I've seen, and it becomes more than just a simple murder mystery. Similar to something like The Bird with the Crystal Plumage, the main character starts out wanting to solve the murders in order to clear himself from suspicion, but that changes when the circumstances become more personal. From the title, we all know that this has to do with someone named Solange. However, that name is not even mentioned until 1 hour and 15 minutes into the movie. It's a bit frustrating but effective in making sure that you keep watching until the very end to find out just what was done to Solange and what it has to do with the murders. 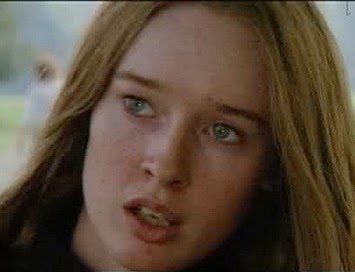 The plot is very well paced, and there all of the scenes are important to the next turn of the storyline. There is just the right amount of suspects and red herrings to keep the audience guessing, with new possible suspects and motives being revealed all the time as the mystery unfolded. The film is not terribly exciting in terms of action or suspense really, not even in the murder scenes, but I never minded that. I loved the characters and trying to figure out their secrets, and was never hoping for anything more than what I was given. The murder scenes are sometimes beautiful and very stylized in their execution, usually from the point of view of the killer and never really shows much of their body, so it could be either male or female. The film is bloodless in a beautiful way, able to show the brutality of each act without getting overly graphic. The female nudity - and there's quite a bit - also does not feel that graphic, but rather natural and normal for each situation that it shows up in. 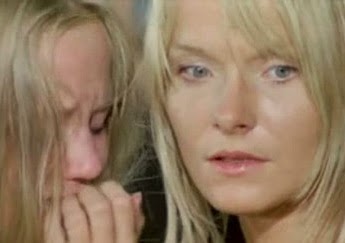 Mostly what I was interested in with What Have You Done to Solange? was the character relationships, and the way they were handled. Most interesting, and somewhat baffling, was the marriage of Enrico and Herta. Enrico doesn't do that great of a job covering up his pervert affair with his student Elizabeth (he even has a sort of fuck pad for the two of them) and it all seems to be the wife's fault because she's introduced as a bitch from the start. Who knows, but to me it kinda sound like she had a reason to be that way. Then, after (spoiler alert) Elizabeth's death, Herta finds out that the girl was still a virgin and suddenly all is forgiven when it comes to Enrico, and the two of them spend the rest of the movie solving the mystery together. Yes, it is a very small relief that he never actually did the teenager, but let's not forget the scene where the two of them were obviously doing some naked sexy things with each other. Every marriage is different, but some things should not be forgiven so easily, I think.

Ah, another awesome giallo experience! There are still plenty more where What Have You Done to Solange? comes from, and though I've enjoyed all my giallos thus far, this is definitely not one to forget. It has wonderful acting from all involved, and a compelling story that makes sure that you stick around for the end. I just hope I never see another knife in a vagina again. Seriously...

Posted by Michele (TheGirlWhoLovesHorror) at 5:15 PM