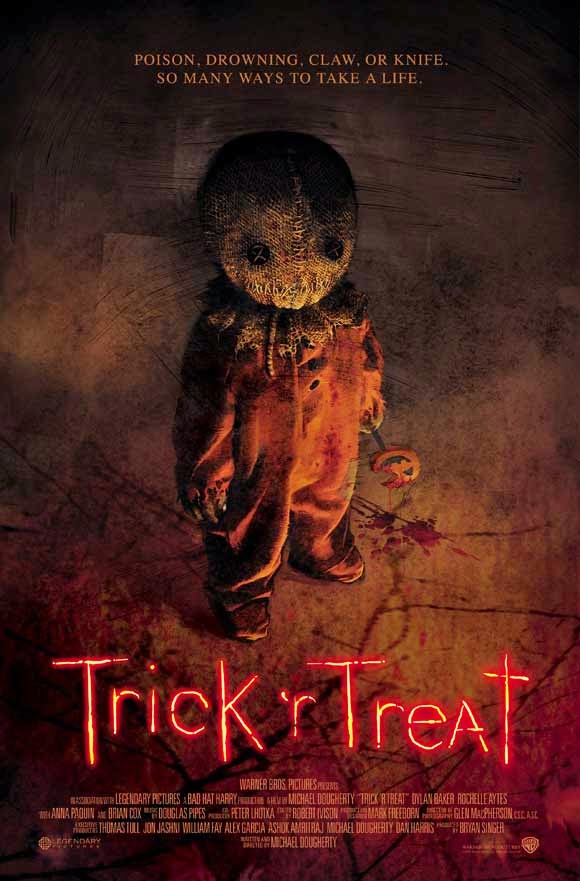 It may have taken a while to get Trick 'r Treat to the masses, but it didn't take horror fans long to embrace it as one of the best horror anthologies around. It is also one of the most perfect films to watch on Halloween night, because it wonderfully captures the spirit of the holiday as horror fans know and love it. Also, as an anthology, it is able to explore some of the most popular subgenres of horror, including werewolves, vampires, ghosts, and serial killers. 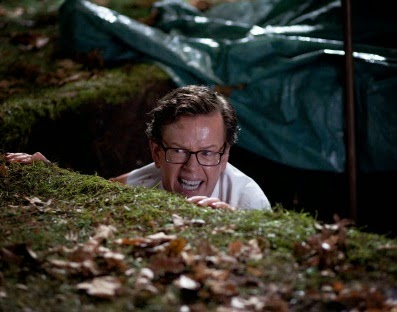 On Halloween night, a young man in a brown sack mask named Sam roams the streets, making sure the sacred traditions of Halloween are followed. There is plenty of mischief happening on this night, too - including a group of kids who take a prank way too far; a principal who has a deadly secret; a seemingly innocent girl who runs afoul of a masked man; and a hermit whose past finally catches up to him. I feel the best way to review an anthology is to just go through it segment by segment, so let's do this!

The short opening segment of Trick 'r Treat introduces audiences to the character of Sam (the name taken from "Samhain" though that's pronounced differently) and his job of protecting the sacred traditions of Halloween - and punishing those who don't follow them. Emma and Henry return home from a Halloween party, and while Henry warns her about keeping their jack o' lantern lit through the holiday night, but she blows it out anyway. Sam brutally dispatches of her with his pumpkin lollipop and adds her to her own front yard decorations. You really don't miss Emma's character at all, though, because this is a woman who actually says the words "I hate Halloween." We don't need people like that in the world. 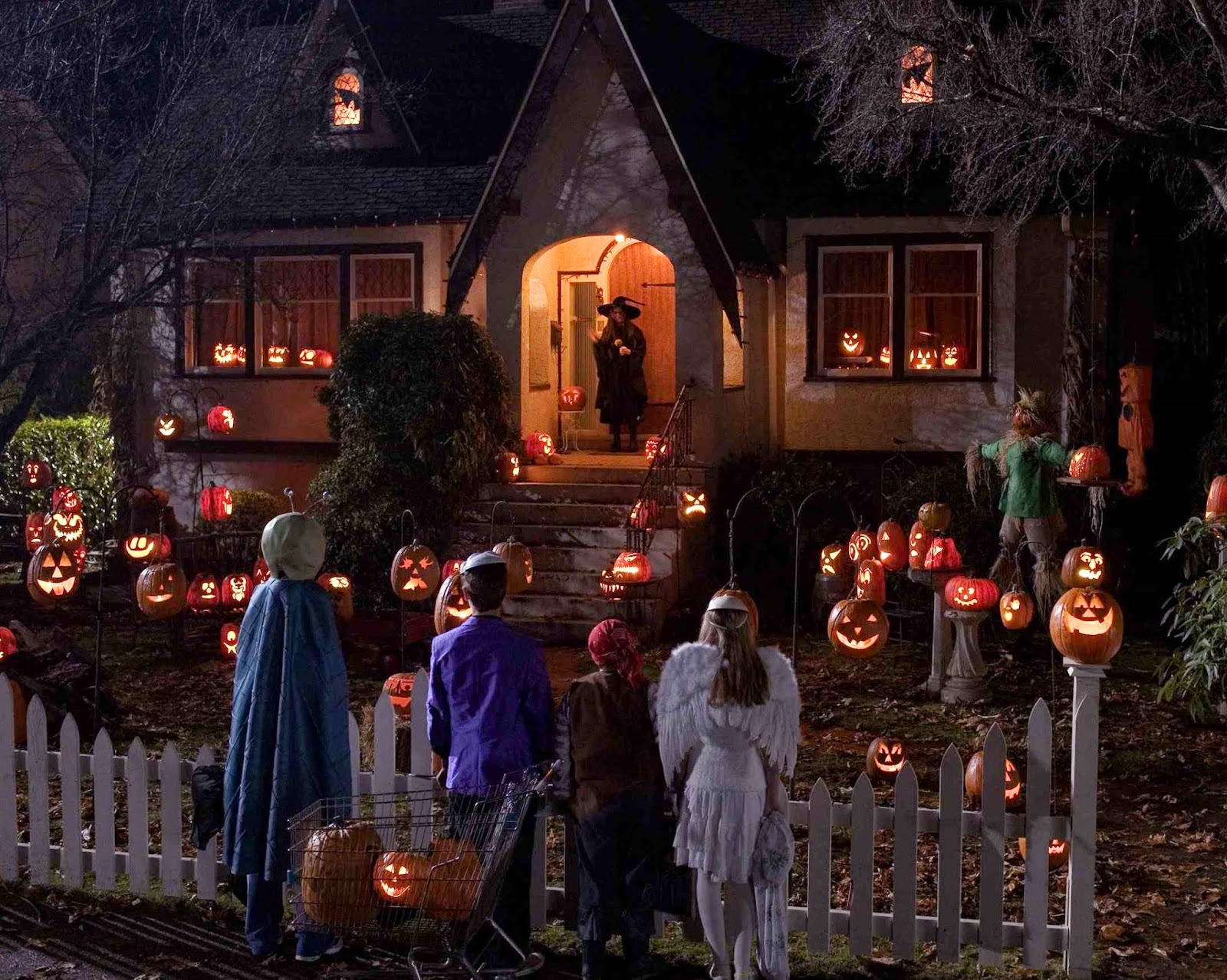 After this scene, Trick 'r Treat takes a few liberties with the typical anthology format, as some of the stories are interwoven with each other and edited together simultaneously. The next segment to be told fully is the one with Principal Wilkins, and it has the same kind of ghoulish sense of humor like you would find in a Tales from the Crypt episode. Dylan Baker is awesome as Wilkins, as he is both creepy and darkly hilarious, especially in the scene where he's burying the body of a young student he just killed. The ending is another ghoulish twist that's hard not to love (though this isn't exactly the end of Principal Wilkins himself) and makes this segment a great one to start things off with.

The third segment tells the story of the Halloween School Bus Massacre, which is probably the most detailed and serious story of the bunch. This is one that would work great as a feature-length film because it has a very original story and has the potential to be very creepy and possibly gory. The location and set design of the rock quarry and the school bus in the lake looks amazing, as does the costuming on the school bus children. Innocuous masks are always creepier than scary ones. And who didn't love the little bitchy blonde girl dressed ironically like an angel? What an amazing little actress she is, and really did an awesome job with this role. 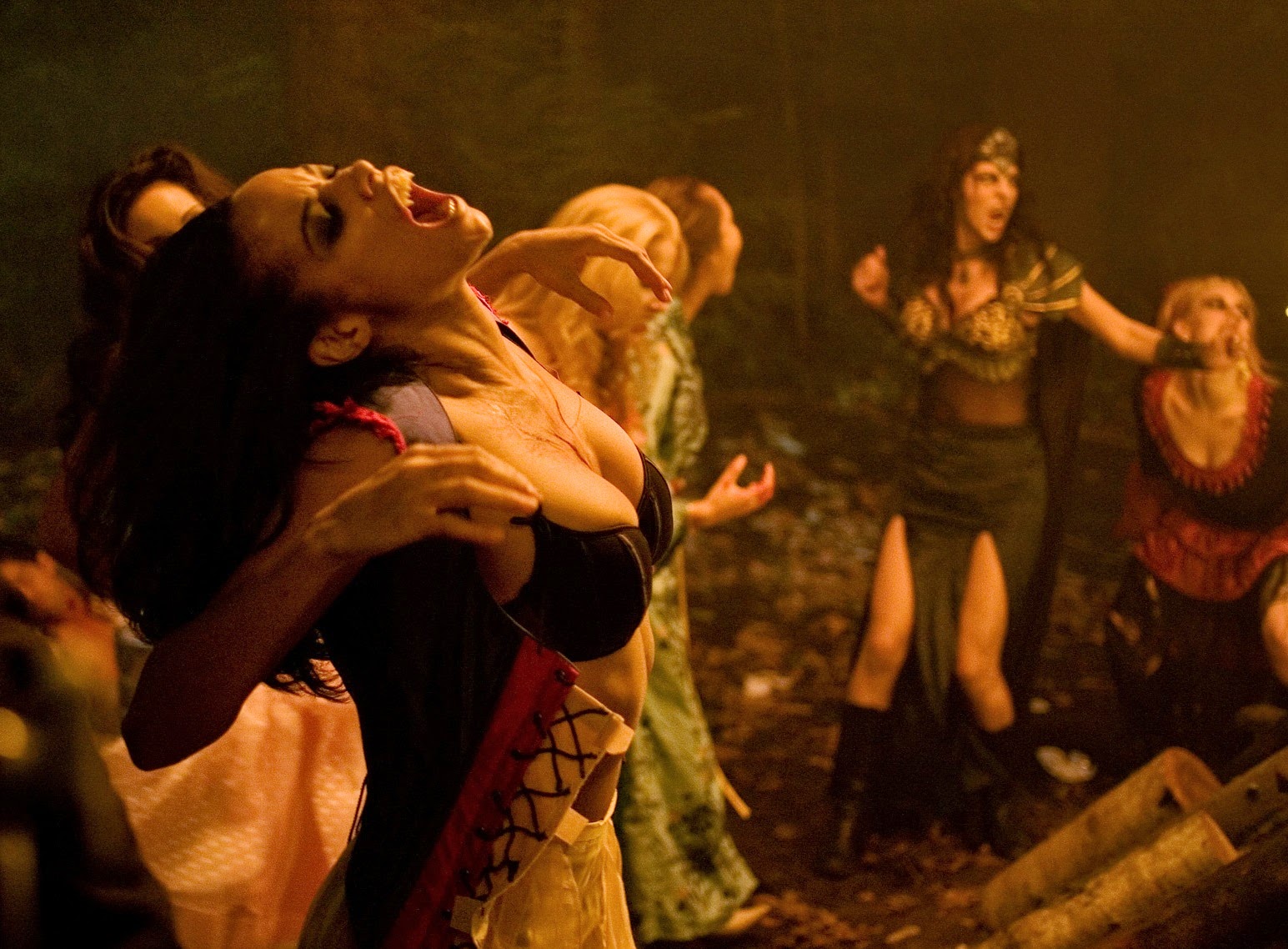 The segment I like to call "The Virgin" is next and it is definitely my favorite. It stars a quartet of hot chicks looking for dates on Halloween night, with Anna Paquin playing the virginal Laurie attempting to find someone to be her "first." Of course, the story does not play out at all how it sounds. The girls are all werewolves, and Laurie's virgin status refers to the fact that she's never killed anyone before. I love this segment simply because of the different way it handles the werewolf transformation scene, where the girls dance around the fire and start peeling off their skin as if it were their clothes. I love the way this sequence was filmed, and the use of Marilyn Manson's "Sweet Dreams" cover. The werewolves aren't exactly the best looking ones out there, but the effects are awesome so it's really hard to fault them too much if at all. 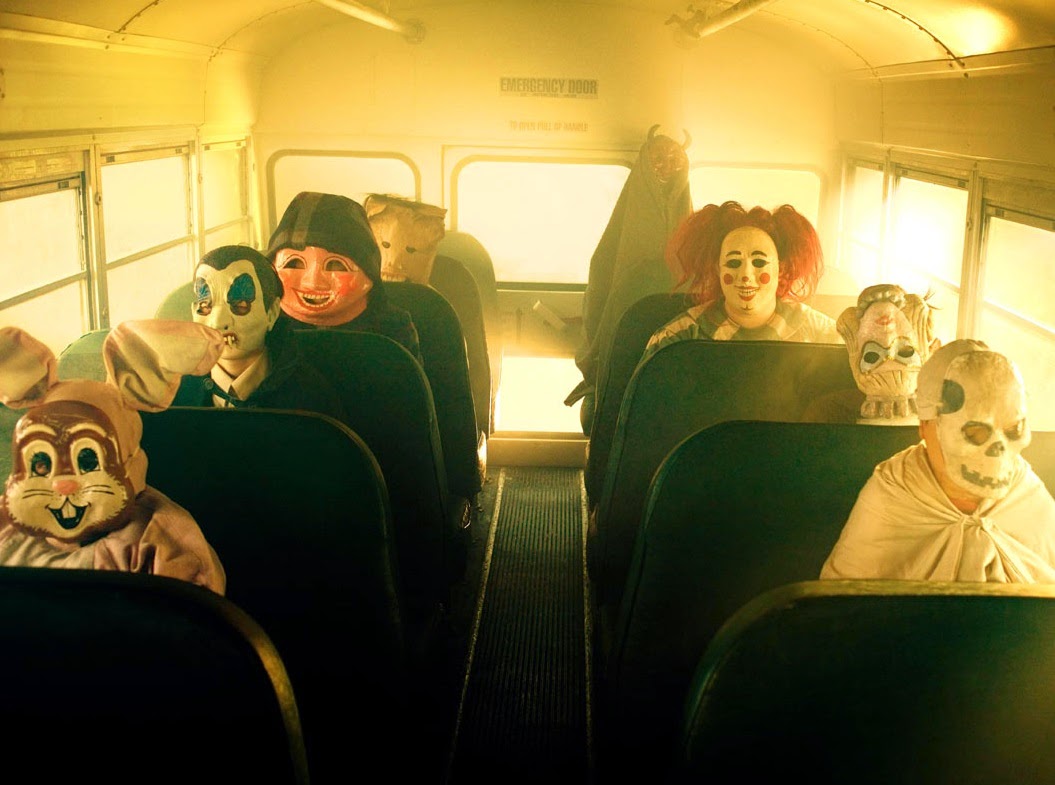 The story of the recluse Mr. Kreeg rounds out this anthology and brings it to a very satisfying conclusion. Kreeg is the ultimate breaker of Halloween traditions, as he didn't decorate his house and is not handing out candy. The segment is a nice little cat-and-mouse game between Kreeg and Sam, who finally is unmasked and reveals himself to be this strange pumpkin-headed demon child thing. This part is maybe not as exciting or funny as the other stories in Trick 'r Treat but it did a good job of tying all the stories together at the end. The twist ending with Kreeg is predictable, maybe, but nice and really ends the whole movie on a great tone and note.

Oh, I'm just so happy that Trick 'r Treat exists. It's a perfect film to add to your Halloween viewing every year if you haven't already, and it's also just a great horror anthology. Trick 'r Treat 2 was announced last year around this time and hopefully creator Michael Dougherty can make that happen soon!

Posted by Michele (TheGirlWhoLovesHorror) at 9:00 AM