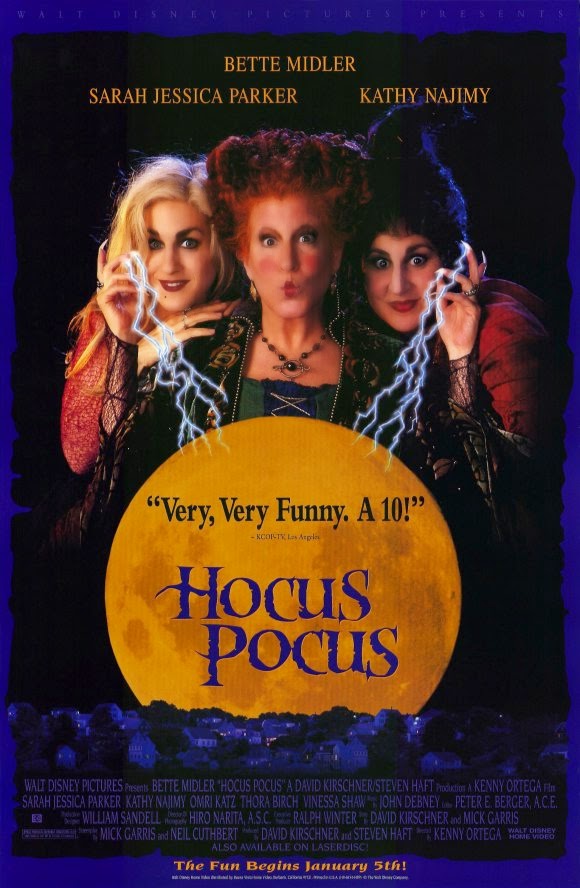 Hocus Pocus has always been a huge favorite of mine - one of those movies that I just had to watch whenever I saw it come on TV. I didn't even realize until recently how much everyone else seems to love it, too, and what a big following it has. And that's just fine, because though Hocus Pocus is a PG rated Halloween film, it is clever and fun enough for every horror fan to enjoy. 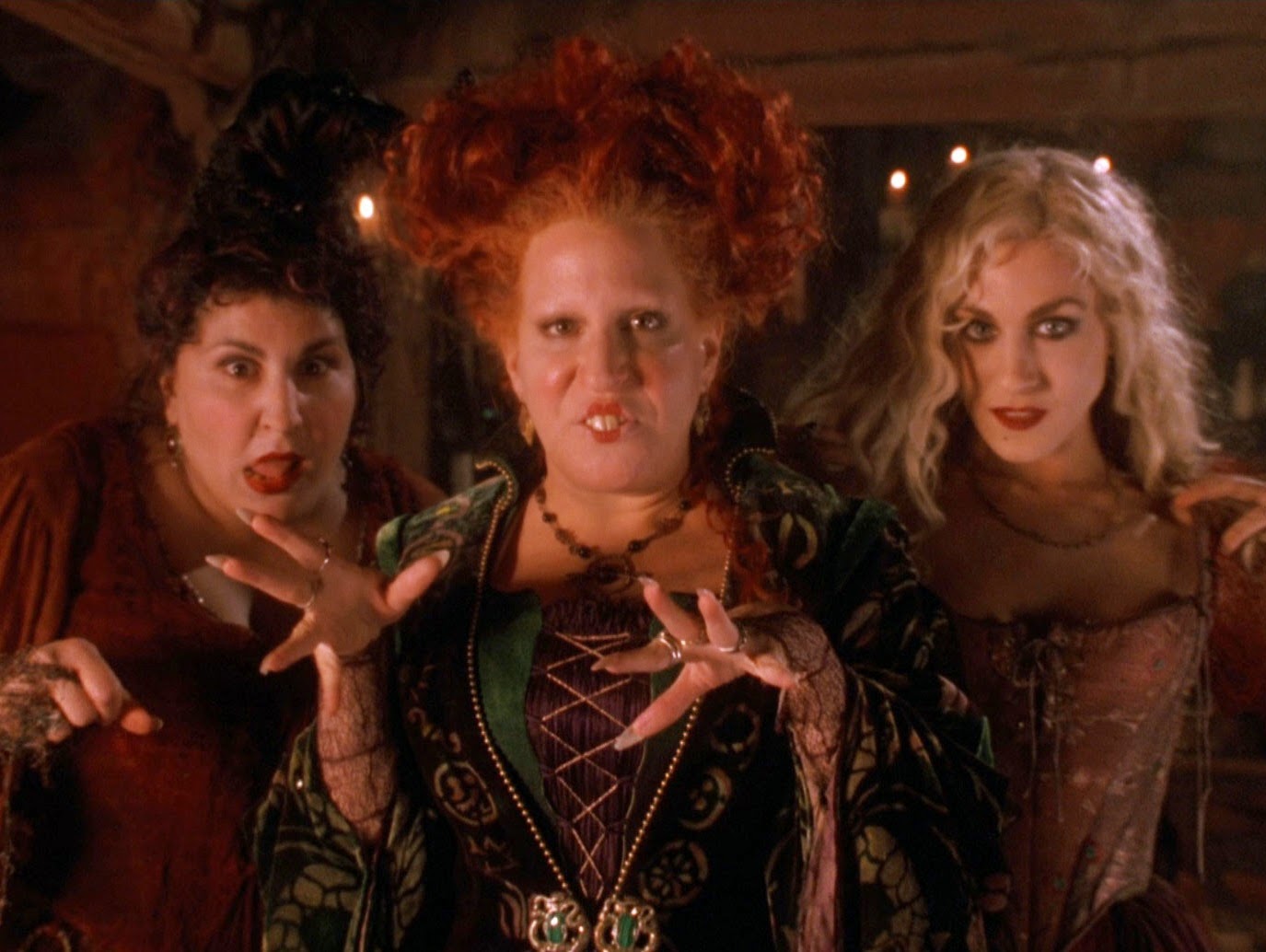 In the town of Salem, Massachusetts over 300 years ago, the Sanderson sisters are three witches who suck the lives out of child in order to give themselves immortality, and are therefore hanged for the crime. Now in the present day, these three bewitching beauties have returned and it is up to skeptical California boy Max; his younger sister Dani; his high school love interest Allison; and a talking cat named Binx to stop them from finishing what they started 300 years ago.

I don't care who you are, Hocus Pocus is a rad Halloween movie, or just a rad movie in general. It's one of those childhood movies that never ages in your mind, and always retains the same charm and lovability that it had when you were ten years old. Its star performers perhaps give it more credibility, but I think what people love about it is its endearing sense of humor that works for people of any age, and also its fun and quick pacing that tells a more than entertaining story. Black flame candles, riding vacuum cleaners like brooms, hiding out in cemeteries, dancing with the devil... Hocus Pocus has everything you could want in a movie that celebrates the best holiday of the year. 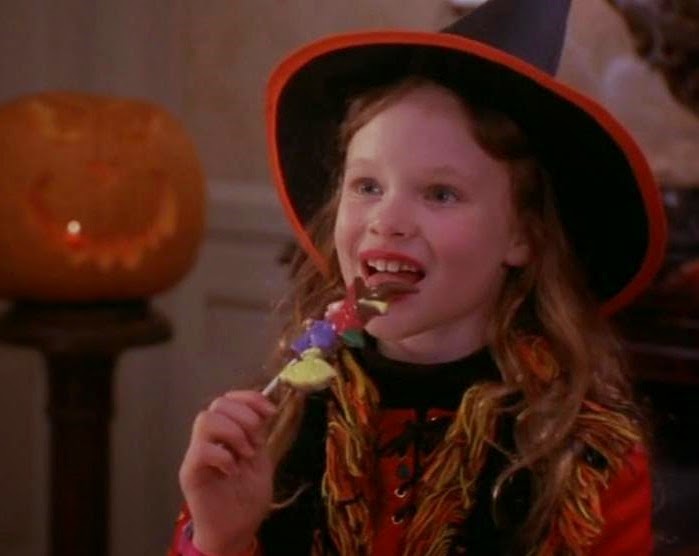 The Sanderson Sisters are no doubt the biggest stars of the show because of the hilarious and amazing performances by Bette Midler, Kathy Najimy, and Sarah Jessica Parker. They all had a gleeful time with their roles, giving each sister a distinct, side-splitting personality, so much so that it's hard to pick a favorite. Midler's personality as Winifred Sanderson is just as big as her red hairdo, and of course she dazzles us all with a wonderful performance of the song "I Put a Spell on You." Parker also has a memorable song in the movie herself, when she is riding on her broom, luring children to the Sanderson's house. Her performance as the ditzy sister Sarah is so freaking adorable, and she has such amazing comedic ability and timing that it's a wonder she didn't do similar stuff later on. Literally everything that comes out of her mouth is quotable. Najimy has always been a great comedienne, so it's no surprise that she kills it here as Mary, who by the way, also has a bitching hairdo. 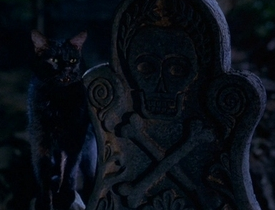 The rest of the cast is also pretty stellar. Omri Katz as Max doesn't have many other credits to his name, which is a shame considering the great performance he gave in Hocus Pocus. Little sister Dani is one of my favorite actresses (both when she was a child and as an adult), Miss Thora Birch. And Vinessa Shaw, who turned out a beautiful and heart-breaking performance in The Hills Have Eyes, makes her character of Allison very likable and sweet. There's also two great cameos from Penny and Gary Marshall to watch out for, and even the two actors playing Max and Dani's parents are a hoot. And how could anyone forget Billy, the sweetest and most adorable zombie in history?

Another reason to enjoy Hocus Pocus? The two most non-threatening bullies ever: Jay and Ernie... I mean, Ice. 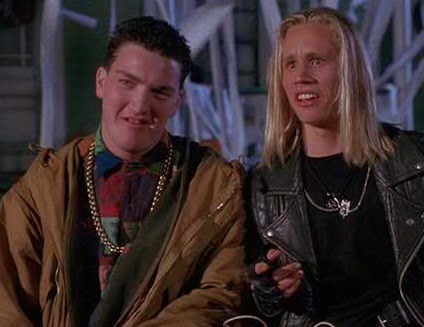 The picture doesn't show it, but am I the only one who thought Jay had the most beautiful smile ever? Anywho, it does seem like with this kind of all-around talent that Hocus Pocus was destined to be a success, and I think we are all very thankful for that.
Many more paragraphs could not do justice to the awesomeness that is Hocus Pocus. It has been a part of pretty much every Halloween since I can remember and will hopefully continue to be for many years to come (in fact, I know it will be because I finally bought it on DVD this year). It easily appeals to both younger and older audience alike with its sense of humor but also with the seriousness that it has about its own mythos. I can't even talk about my favorite moments in Hocus Pocus because the whole movie is my favorite moment. I love it, and I know you all do too!
﻿

Also, I just had my mind blown when I was doing some quick IMDb research and found out that the character's name is actually "Thackery" Binx and not Zachary. All these years I guess I just thought that everyone in the film had a weird lisp...
Posted by Michele (TheGirlWhoLovesHorror) at 4:20 PM