It may have been Sunday and the last day at the con, but there were still so many more things to experience and do! I usually use Sunday as a shopping day, so here is all the cool stuff I picked up from vendors that day (and the other days, but I'll just put them all here). I said before going to the con that I was going to slow down with the t-shirt buying this year, but of course that didn't happen. 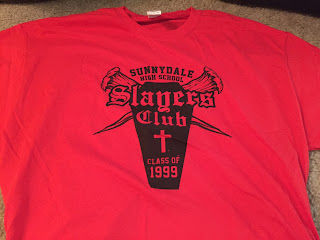 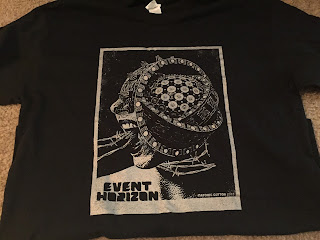 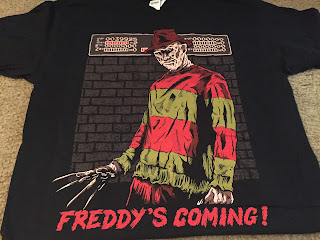 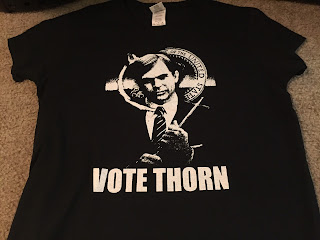 And thanks to one of my favorite vendors, I finally got an original one-sheet for Child's Play!﻿ 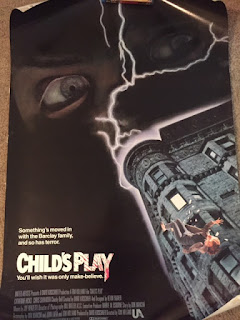 Still haven't seen Green Room yet but I'm sure I'll love it! The Alamo Drafthouse table had these mini posters for free so I snagged them both.﻿ 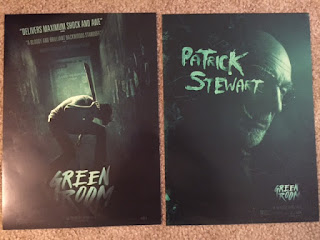 I had also said before going that I was going to find at least one cool art print this year, and I actually got a bunch. This is a great collage poster from Pallbearer Press.﻿ 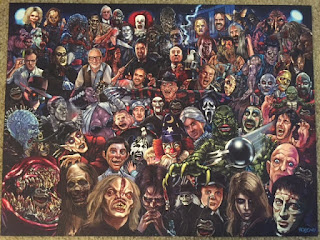 And another nice mini print for Return of the Living Dead.
﻿ 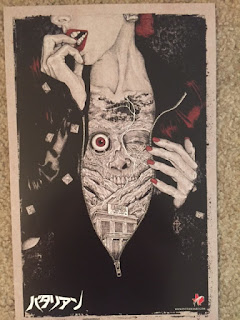 Mondo always has the best art that is usually only available at the convention, so I finally got one this year! I loved this Scream one, but I really could have bought all of them - there were awesome ones for Jaws and A Nightmare on Elm Street as well.
﻿ 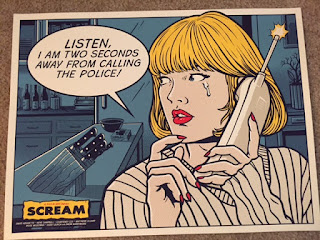 And because I don't have enough movies already (JK, I do, but you can never have too many movies) I got these import Blu-Rays of Night of the Living Dead 90 and Night of the Creeps from Severin Films.﻿ 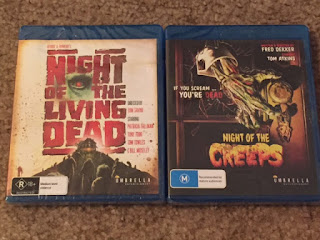 Actually, one of the coolest things of the whole weekend happened before the convention even started for the day. I went downstairs in the morning to get my coffee (which was muchly needed) and then went outside to drink it and enjoy the weather. As I'm just out there chilling, Lance Henriksen came outside for a cigarette and sat down next to me on the bench. I was kind of freaking, but didn't want to say anything until a guy came up to talk to him. I took a picture for him, and then we all just chatted for a bit. I mentioned how fun one of his latest movies, Harbinger Down, was and then when the other guy left, Lance kept up the conversation with me. We talked about how nice and friendly everyone was at the con and where we were from, and holy shit, I couldn't believe that I had just had the most casual talk with Lance freaking Henriksen!﻿
There were still some huge names I had to meet today, so I headed right for Robert Englund before the show started. His line was of course huge (there were actually people who were waiting all day the day before that had to come back!) and I actually had to leave it after a while because he had a photo op and then I had a photo op, but don't worry! My time will come!
During this break that I had, I got in two more meets. First was Matthew Lillard. He was so wonderful to the fans, just sitting on the edge of his table and giving everybody a great meeting. I of course got a hug from him (he gave my shoulder one of those real squeezes as I was leaving), told him how much fun he was in Scream, how great the Scooby Doo movies were, and thanked him for being there at the convention for Wes. And he wrote "Liver Alone" on my Scream picture that I picked out for him to sign, which made me so happy! This guy just rules. 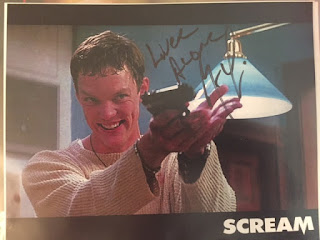 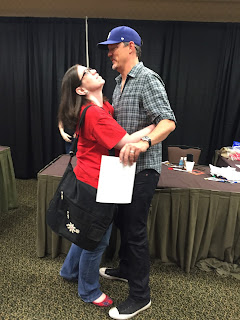 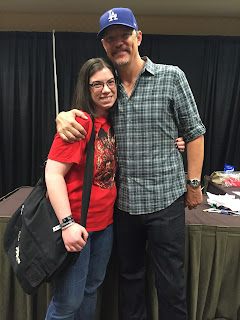 Another big name that I never expected to meet in my life was Rose McGowan. I love her as an actress and a person (there's a video on the TFW Facebook page of her singing karaoke at the party Saturday night!), and this was another honor. I had bought my autograph ticket the day before and picked out a Planet Terror picture for her to sign. I told her how fun that movie was, and she was just like, "Yeah, it's so rad, isn't it?" I asked her if she had a quote from the movie to put on my picture, and we talked a little about her gun leg and how real it looked, not like CGI at all, and then I just thanked her for being there and what a pleasure it was to meet her. Thank you again, Rose! 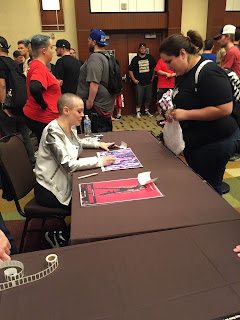 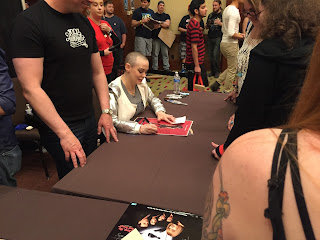 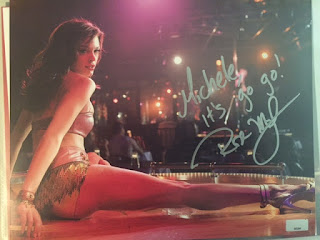 Now it was time for yet another amazing, once-in-a-lifetime experience. With all the big names from Scream there, they were doing a Scream Team Up photo op with Rose McGowan, Matthew Lillard, Skeet Ulrich, and David Arquette. It was expensive, but who cares! When I was the next person in line, David Arquette glanced over at me, noticed my Wes Craven shirt and was like, "Oh, you got one of those!" Then he pointed it out to the other guys, and said, "Guys, look at this, it's a tribute to Wes." They loved it. When I was getting into position for our picture, I said, "Oh my god, this is like a dream come true!" and Rose said, "For us, too." Just look at this picture! It fucking rocks! 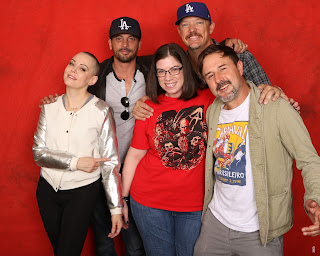 Only two more meets left! I skedaddled back to Robert Englund's table because there was no way I was going to miss him. A guy a few people in front of me in line had this awesome standee of Robert as Freddy in New Nightmare, and Robert stopped for a second to show it to everybody and said how rare it was. I love seeing how amazed and surprised the celebrities are by the stuff fans bring to them, it shows how much they appreciate the experience. One reason Robert's line took so long was that he was being awesome to everybody that came to meet him and having a great conversation with each of them. I thanked him for being there and said what an honor it was to meet him. Then I said that he reminded me a lot of Vincent Price, which he was thankful for, and talked about how being in horror movies was such a blessing for him because it made him known all around the world, just like Vincent Price. Wow, dudes. Another bucket list item checked off! Robert Englund is the man! 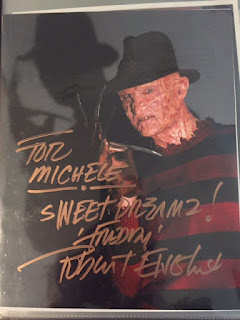 It seemed like every time I went by Lance Henriksen's table, he wasn't there, so when I finally caught him, it turned out to be the perfect time because after these last people in line, he had to go to a screening for his new movie, Daylight's End, and then he was done for the day. It was kind of funny when I got up to him because I was like, "Well, I already got the chance to talk to you earlier today!" and he laughed and said he remembered me. We chatted a bit more, he talked about his new movie, and I absolutely love this guy! What a great picture from Aliens, right?! 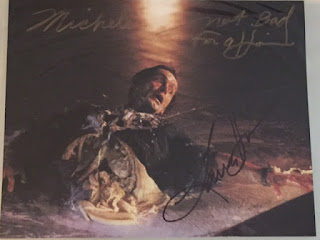 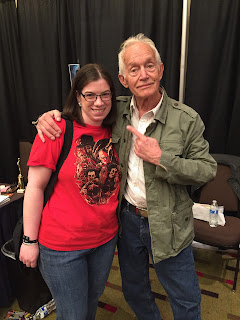 I met up with my podcast friends Joseph and David after this last meeting, bought some of my swag, and then they saved my life by offering to take me out to dinner when they were done getting their interviews. But first, I had to catch this Freddy cosplayer, who was totally into it and gave me some great pictures! 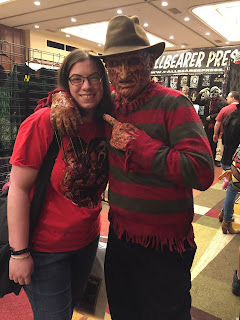 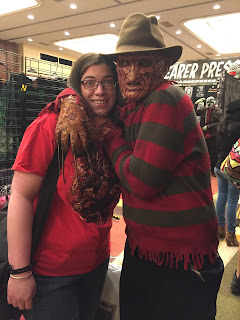 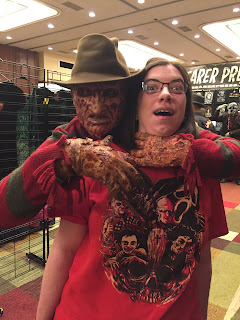 We all said goodbye to Texas Frightmare Weekend for the year and then went to get some food. I went to their place so we could record a quick wrap-up episode for their podcast, and met their dog who tried to eat my face. 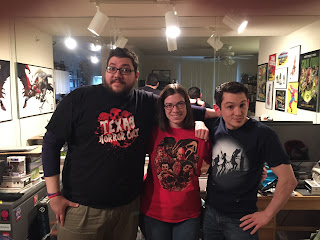 I may say this every year, but I really think that Texas Frightmare Weekend 2016 was my best convention experience yet! Thank you once again to Loyd Cryer for putting on one hell of a show and bringing in so many people that I have wanted to meet for years. ﻿I will absolutely treasure every meeting I had with every celebrity, all the other attendees, my new friends, the vendors, and the dedicated and hardworking TFW volunteers. The show was absolutely KILLER and gave me so many awesome memories and experiences. I will most definitely be back next year, and every year after that if I can! Thank you, thank you, THANK YOU Texas Frightmare for the most phenomenal weekend of my life!!!
Posted by Michele (TheGirlWhoLovesHorror) at 10:27 PM