Texas Frightmare Weekend 2016 was absolutely amazing, my fellow horror fiends, and I cannot wait any longer to tell you all about it! So let's just jump right in and talk about all the awesome that this past weekend had in store for me.

The show ran from Friday, April 29 to Sunday, May 1, but my weekend really began on Thursday night. I got to the hotel, and then later on that night, I met up with three of my online horror friends who I was seeing in person for the first time. Joseph, David, and Shaddai are Dallas natives who run a podcast called Cinefreak Critique, and I've actually been a guest on that show twice now (on the first show, we talked about Diabolique, and on the most recent show, we talked about Sleepaway Camp 2). They picked me up from the hotel and took me out dinner at this amazing place where we had the best burgers and sweet potato fries (marshmallow fluff dip, holy shit). It was so cool to finally meet them all face-to-face and we got on like we'd been friends for years.

But of course Friday night was when the awesome really began. I had again purchased a VIP ticket for the show, so I headed down into the main room to pick up my wristband and goodies. Here's what was inside my VIP bag:

When the show actually started and we got to head into the rooms, I honestly spent much of my time just wandering around and feeling totally overwhelmed! This was my fourth year at Texas Frightmare Weekend, but I really didn't have much of a plan this time of what I wanted to do or what order I wanted to meet people. The first thing I ended up doing was meet up with a previous TFW friend Chris (who actually took me to Wal-Mart earlier that day - thanks again!), and we hung around the Full Moon table. Chris had a great Puppet Master record that he wanted Charles Band to sign, so we waited for our moment. We both had a great chat with Band all about Puppet Master and other Full Moon awesomeness, but unfortunately did not get a picture with him.
Actually, we had a wait a bit to talk to Band because he was chatting with TFW founder and showrunner, Loyd Cryer. I had met Loyd last year and got to thank him for what an amazing show he puts on every year, but for some reason I didn't ask for a picture then! I had a goal to catch Loyd sometime this weekend to remedy that, and was so happy that I got him first thing on Friday night. 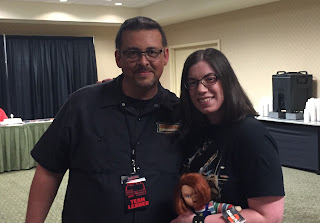 After this and doing some laps around both of the rooms to take everything in, I was finally ready to get that first meeting under my belt. Since I had my Chucky doll with me and was wearing my Child's Play 2 t-shirt, I knew the first one had to be Mr. Gerrit Graham, who played Andy Barclay's foster father Phil in CP2 (he was also in Chopping Mall, hell yeah!). This guy was great, so high-spirited and engaging, and what he wrote on my picture was exactly what I was hoping he was going to write! And so I have added another awesome picture and autograph to my collection of Child's Play people! Yes! 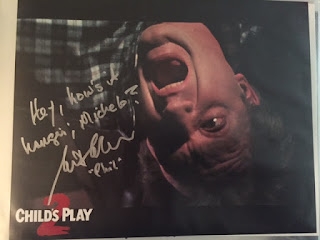 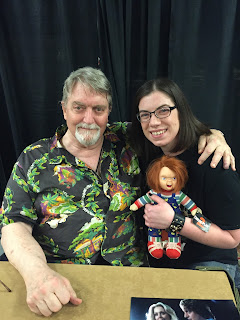 Around this time, I caught a picture of a hilarious Dinosaur Freddy cosplay... 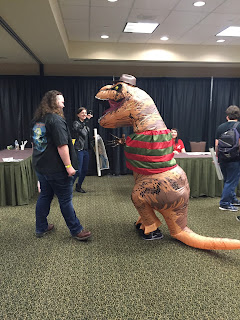 ...and another great cosplay from one of absolute favorite movies, Carrie. 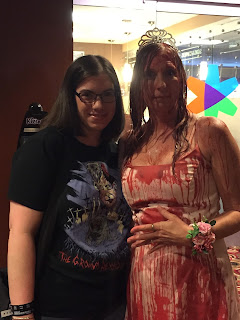 One big thing that I had to get done that night was my professional photo op with Robert Englund. You guys. ROBERT ENGLUND. I didn't actually meet him at his table until Sunday, but he wasn't doing photos at his table for the show (probably because they knew he was going to be crazy busy) so I couldn't pass up this opportunity. While waiting in line, I saw some of the pictures that other people were coming out of the room with, and was unbelievably excited to find out that he was wearing the Freddy glove for the pictures! One guy was like, "You're going to love it, he's having so much fun in there!" And it was definitely true. Robert was rocking the glove, putting each person in a different pose for their pictures, and just really getting into it and giving everyone a great experience. I love, love, love how the picture turned out! This shit is getting framed for sure. 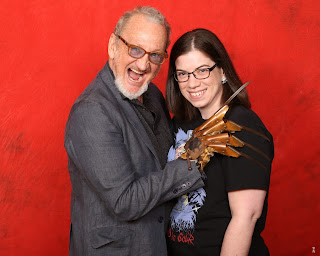 ﻿
I met up with Joseph, David, and Shaddai again as they were covering the show for their podcast and we spent some time enjoying the show, until I suddenly ran into my long-time TFW friend, Acacia! I met Acacia and her sister Heather at my very first Frightmare and we see each other every year, and hang out with each other as much as possible while we're at the show. I seriously love these chicks, they're so wonderful.
Now, I had changed into my Pet Sematary shirt (and put the Chucky doll away) because of the next person I wanted to meet, and that's where I was heading when I met Acacia. But while we were catching up, he left his table and I thought that I would have to get him later. Luckily, though, he was only gone for a bit and came back after about an hour, so now it was time to meet... Miko Hughes! Miko was of course Gage Creed in Pet Sematary and also Dylan in Wes Craven's New Nightmare, two more of my favorite movies ever, so I was ridiculously excited to meet him. The guy meeting him in front of us actually had a pretty badass Pet Sematary tattoo with Gage on it, and Miko loved it. When it was my turn, I couldn't decide which picture for him to sign and asked him which one was his favorite and he jokingly said none of them. I finally decided on the one below, and he was like, "That's actually my favorite one, I was testing you." So cute. I told him how great it was to meet him and that those two movies were so important to me. We also talked about the upcoming Pet Sematary documentary, which I cannot wait to see. Miko was so sweet, and when I asked for a hug, he hugged me back like he really meant it. Amazing guy! 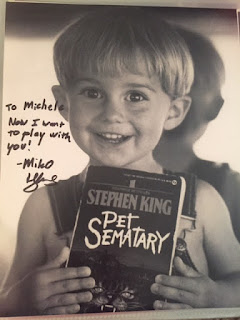 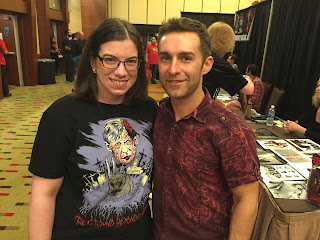 The convention was over for the night shortly after this, but I still had the annual Friday Night Party to go to! The theme this year was for Halloween II, so the MC and other people were dressed up like doctors and nurses, and there was a cool hospital backdrop in the room where people could take pictures. I ran into another old TFW friend at the party and he ended up being my dance partner for the night, which started with the whole room singing "Bohemian Rhapsody." Then there was lots of dancing, a costume contest with some even more amazing and fun cosplays, and I got a picture with the winner! Great idea for a cosplay from Dream Warriors! 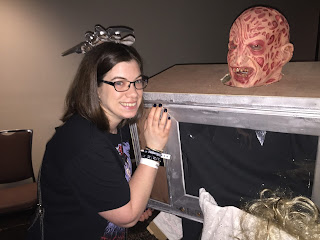 At about 2 o'clock in the morning, I had to call it quits because Saturday is the craziest day of the convention and I knew I needed to get at least some sleep! Everything I got to experience so far had been so amazing, but the best was still yet to come in the next two days! Stay tuned for more awesome!
Posted by Michele (TheGirlWhoLovesHorror) at 5:11 PM