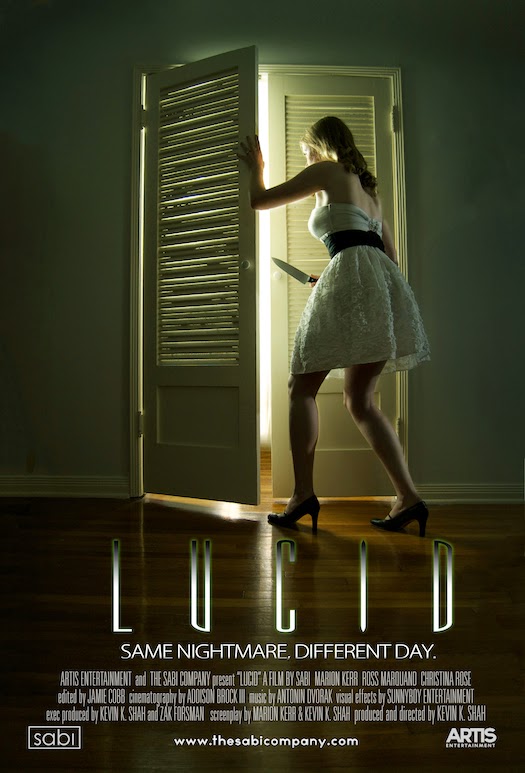 I'm definitely becoming more a fan of short films because you can really see how much talent some people can put into such a short amount of time. Case in point, this wonderful 18-minute short called Lucid, sent to me by the writer/director himself. I was sold on watching it simply because of his passion and enthusiasm for the project, and of course, the intriguing premise.

Lucid is the story of woman who dreams every night that her husband tries to kill her. The dreams get more and more intense and graphic, as does her anxiety around her husband in real life. The tone of Lucid is wonderfully comical at times, mostly due to main actress Marion Kerr's reactions and hilarious yet subtle physicality. The editing is perfect, and utilizes a great montage-like style to provide a lot of information in a short amount of time. Scenes get a bit redundant when you see the same shot over and over again, but they do manage to change things up here and there (again, usually using comedy) to keep things punchy and interesting.

On the technical side, Lucid is beautifully shot. I love the look of the dream sequences with the bright light and soft edges, and Karen's oddly formal white dress with black waist for costuming. Shots are framed with true expertise, style, and an eye for just what looks right and what will get the right reaction from the viewer.

This is one of those short films that I would love to see fleshed out into something much bigger in order to explore all of the issues that are brought up. Her fear of possible motherhood and her fear that she's not right for the role of perfect wife (looking pretty all the time and making dinner every night) - I saw a lot of cool things about her character in particular that I just wanted to dig into more, because they were only able to scratch the surface. In fact, the filmmakers do have plans to turn Lucid into a TV series, though I think just a feature-length film would suffice.

I definitely found Lucid to be a wonderful short film that only left me wanting more by the end. Beautiful job!

Posted by Michele (TheGirlWhoLovesHorror) at 5:59 PM