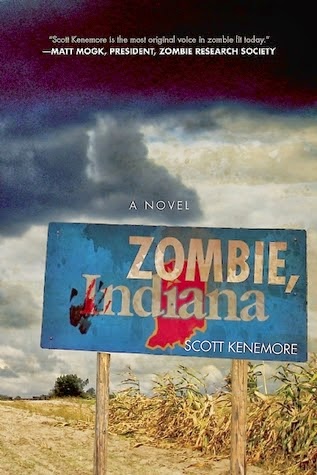 Zombie author Scott Kenemore continues to cut a swath of undead destruction through the American Midwest with this third novel in his "Zombie State" book series. Zombie, Indiana again takes readers to the capital of the titular state - this time Indianapolis - where we follow several different characters during the first 24 hours of a zombie outbreak. And even though this is his third book with the same basic storyline, Kenemore manages to again make things different and interesting by having the book take on the personality of the state itself.

The story starts when a high school class goes missing while touring some nearby caves. Special Sergeant with the Indianapolis Police Department James Nolan is called in to investigate because there was a very important person on that tour - the governor's teenage daughter, Madison. Nolan finds the class decimated by a zombie attack but does manage to save one survivor, 15-year-old Kesha Washington. Together, they escape the caves and search the surrounding area for Madison, avoiding zombies and people that wish to do them harm. Meanwhile, Governor Hank Burleson is obviously hiding something from the people of his state and those closest to him.

While Kenemore's first two Zombie State books (Zombie, Ohio and Zombie, Illinois) were at times literally laugh-out-loud funny, I found myself experiencing some different emotions with Zombie, Indiana - emotions one does not usually find in this kind of story. By the end of the novel, there is an undeniable feeling of hope and togetherness not only amongst the main characters, but also amongst the people of the whole state. I was actually made to believe that some good could come of a zombie apocalypse, and believe me, that was a welcome relief and change. When you are so used to zombie stories being about the evils of man in a societal breakdown, I loved reading a story with a more than positive ending, where good people still existed - existed, and prevailed. 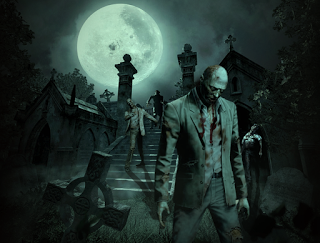 This comes about not only through the characters of Nolan and Kesha but also through the people that they meet as they make their way to the heart of Indianapolis. The common theme with these strangers is that they are not at all how they first appear to be to Nolan and Kesha. The first people they meet instill a sense of foreboding for any future encounters - a blind farmer and his wife seem like the nicest and least threatening people you could hope to meet. But their religious zealotry and racist comments immediately put off our characters and they quickly get away from them. After that, though, the Hoosiers start to show us who they really are. Carnival workers, popular high school girls, and a motorcycle gang are all people who at first seem rather untrustworthy but prove themselves to be just the opposite.

Though Kenemore does give examples of bad people who take terrible advantage of the zombie outbreak to commit crime, they are not at the forefront of his story. Even the evil governor is in the minority, as the people around him actually want to help the people of Indiana, and are obviously reluctant to go along with his plan of "do nothing." I don't know much about Indiana myself (though I do have an aunt that lives in Indy) but Kenemore seems to want us to know that Hoosiers are honest, good people - the kind of people that you would want to rally together with during a zombie apocalypse, or any crisis really. Even when they find out that the governor has created a barricade around the capitol building that only protects a select few and doesn't let in the rest of the populace for protection, they do not immediately storm the place and cause chaos. They set up camp and wait for the  help that they are sure is coming, because the good in them makes them believe in the good of other people, even if they turn out to be wrong. 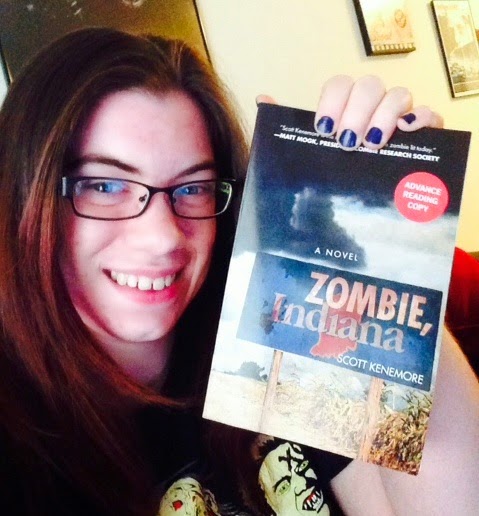 But if it's zombies you're really looking for, fear not. Readers are once again treated to several memorable scenes of zombie attacks and destruction in all new locations. Though I personally don't think he can top the awesomeness of the coal tunnel sequences in Zombie, Illinois, Kenemore tries by giving us a great introduction to the outbreak in the very cool location of an underground river in a cave where the high school students are taking a tour. I was disappointed that we didn't get to spend that much time here because the images coming to my mind through the descriptions were very creepy and unsettling. And again, all types of zombies make an appearance in Zombie, Indiana - from the blackened and disgusting bodies in the caves to even a little toddler zombie in a farmhouse. The author sure knows how to push the readers' buttons and show us things that we never wanted to see, if only in our minds.

Scott Kenemore has once again proven that he is an amazingly gifted writer who brings to the genre tales that are equally humorous and thought-provoking, gory and inspiring. Zombie, Indiana is just the latest in a string of highly entertaining zombie stories that every horror fan should get their hands on right away. It is a fast-paced novel with great characters and an even greater message. If Kenemore ends up writing 47 more books to cover every state in the union, I will gladly read every last word.


Zombie, Indiana will be available in May 2014.