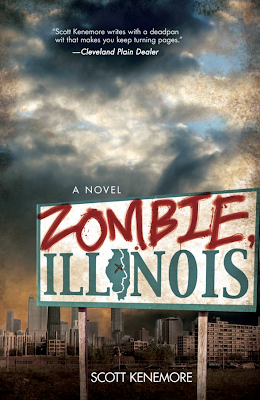 Straight up, dudes - Zombie, Illinois is the best zombie novel I have ever read, and a new personal favorite. Having now read the book twice and freaking loving every second of it each time, I feel like I can and like I must recommend this book (and, really, anything else Kenemore writes) to anybody with the same love for zombies that the author has. A very close second to my love for ghosts is an undying love for almost all things zombie-related as well. I'm also particularly fond of the good old zom-com so this book and I were pretty much meant to be. Read on to learn more about it and hopefully I can convince you to read the book, too!

Zombie, Illinois takes place in the heart of Chicago and follows three very different characters as they try to survive the first 24 hours of a zombie apocalypse. In the midst of the chaos, these people - a middle-aged reporter, a female rocker, and a pastor - find out about some pretty shady dealings having to do with the local government, who are using the zombie crisis to hide their crimes and assume power.

Kenemore's wit is unmatched and his ability to constantly keep the action interesting, exciting, and hilarious is one of the many things that I love about Zombie, Illinois. The three main characters - Pastor Leopold Mack, Maria Ramirez, and Ben Bennington - are all completely lovable, well-drawn and amazing characters in different ways and I couldn't get enough of them. Chicago itself is a major character, too, and though the book would probably have more meaning to me if I actually knew anything about Chicago, Kenemore easily paints the picture of a corrupt, yet loyal and beautiful city that has its ups and downs. It's a story about the different neighborhoods in the city and how they either work together or against each other when the crap hits the fan, something that is very unique to me. I didn't even really speak to my neighbors until after I'd been in my apartment for about 3 months. And that was just to ask if I could borrow a snow shovel. Not so sure they'd take me in once the dead started coming back to life. 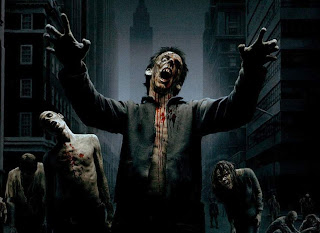 Zombie, Illinois is unique for many reasons, and one of those is the types of zombies our heroes encounter. Many zombie apocalypse movies show the audience the freshly dead and turned. Kenemore makes us think about all the other types of dead people we'd have to deal with come Z-Day - murder victims thrown in the river; dusty gangster skeletons; and the heap of dead people rising from unmarked graves. Another thing unique to this book is that zombies are not the only foe the main characters find themselves up against. Ben is a reporter who knows about city politics and Maria has a close connection to one of the city's aldermen (which is a member of the city council, basically, representing different neighborhoods). The book is clearly a commentary on Chicago politics, which kind of made me all scrunchy-face at first because I don't like or understand politics, but I can't deny that it makes total sense for the situation and gives the reader a very interesting spin on a zombie apocalypse story. I mean, what are the first things to always fall in society in any zombie apocalypse story? Democracy, law and order. Nobody is really in charge of anything anymore, but get enough scared survivors together, give them a leader to follow, and they will follow. That's exactly what these aldermen (and women) do in Zombie, Illinois - and they do it quickly, too. Maybe everyone really should follow them if they can get things under control so fast after zombies take over... 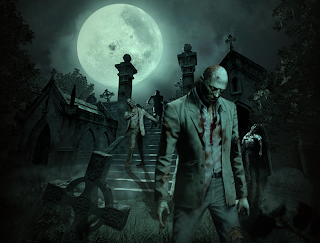 The absolute best part of the novel is when Mack, Maria and Ben make the brave (and sort of stupid) choice of staying off the streets and instead choosing a quicker route by traveling through the system of old, closed-off coal tunnels under the city's streets. The sense of absolute dread and danger as they try to find their way in pitch darkness with weak flashlights was enough to make me squirm in my seat while reading, picturing myself in the same situation. This part is also great because it is where the trio meets the greatest zombie of the book - one with a badly broken back that at first looks to them like it is just a pair of walking legs. That's just... genius. Pure freaking zombie genius.

This section of the novel is also noteworthy because it reinforces what I think Kenemore is really trying to say. When Mack is looking down into the pit of zombies in the coal tunnel, it is not the fact that they are reanimated corpses that truly horrifies him. It is the fact that they are the reanimated corpses of aborted fetuses and Girl Scouts with their throats cut. It is seeing the crimes and inhumanity of his city literally coming back to haunt him and showing him just how bad it really was. I definitely liked that there was a good message, or at least something deeper to this novel than just being something funny about zombies - another reason for me to love Kenemore and what he's doing even more.

There's zombies, there's corrupt politicians, there's pastors who wear pink ties, there's a budding romance between a reporter and a Latino girl in a band called Strawberry Brite Vagina Dentata. THIS. BOOK. RULES. It is probably the most fun you'll ever have reading about zombies, and once it's over you'll just want to flip straight back to that first page. Kenemore is one of the most promising new names in zombie/horror literature and I cannot wait to read more of his stuff. I've read he's already working on a new novel right now... with more zombies, right? Please tell me there are more zombies! Um, anyway, read Zombie, Illinois and I can pretty much guarantee that you'll enjoy every word of it, just like I did.


Did I also mention that Kenemore has Chicago's mayor being eaten alive on TV by an undead Al Capone? 'Cause he does. I want to marry this man.


Wait, before you go... I also reviewed two of Kenemore's other books - my thoughts on Zombie, Ohio can be found here and my review of Zombies vs. Nazis: A Lost History of the Walking Dead is right here. If I haven't convinced you to give this author a chance from this review, maybe one of those will do the trick.