Hey there, folks! So I decided to torture myself and become a part of Mondo Bizarro's Project Terrible thing where other bloggers make me watch bad movies and then review them. Happy to say that I survived all the movies fairly well, and here's the first review of a movie challenged to me by Wolf Ninja at Gaming Creatively. 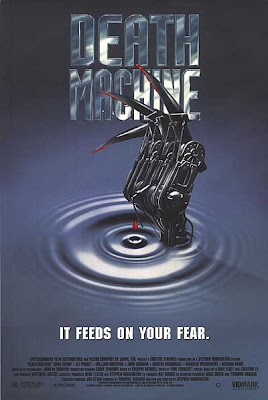 was, indeed, pretty terrible. But at the same time it was still strangely watchable. Most of this has to do with some pretty hilarious effects and the acting by the film's only star, Brad Dourif.
So for the longest time I wasn't really sure what this movie was about while I was watching but I think I got it now. Let's just go through the whole plot to get it straight. It's in the future and this hot chick named Hayden Cale is the new chief executive of some company called Chaank which makes these super-duper weapons and shit. There's been some bad press about the company having to do with the Hard Man project (where they make half-man half-machines and they do bad things sometimes) and she goes in there to change it all around, and there's a guy who looks like Jake Busey who doesn't like her or something. There's also Brad Dourif, who plays Jack Dante, and he's the cliched eccentric mad scientist genius who has built this mega-all mechanical-weapon called Warbeast. He's in love with Cale but she wants to fire him and he's batshit crazy. So one night, Cale's at the company for some reason I can't remember and there's also these terrorist-type dudes who break into the building to steal or blow up some shit, and Dante is there and he sics the Warbeast on all of them so they have to try to get out. 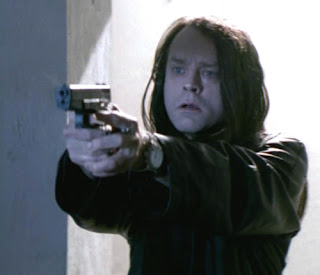 As crazy as all that sounds, I still say that this movie was slightly entertaining, believe it or not. There are some terrible moments - the bad dialogue, the over-the-top acting, and the plot that is hard to follow at points - but this is part of the fun of terrible movies. And I was actually able to sit through the whole thing in one sitting and stay somewhat interested so we've gotta give Death Machine

Sidenote: Warbeast, the name of the "death machine" that stars in the film, probably would have been a better title than Death Machine

for this movie. Still a little vague, but intriguing.

The best thing about this movie was Brad Dourif, who is probably the one reason that some people might actually seek this movie out instead of being forced to watch it like I was. His performance is pretty much what you would expect if you tell someone "Dourif is an eccentric mad scientist genius." He's got a bitchin' haircut and delivers his lines with all the craziness and hilarity he can muster and it is absolutely enjoyable to watch. If not for him, I probably would have zoned out on this flick a third of the way through - EVEN THOUGH, as some of you who know me might guess, I am slightly terrified of Dourif himself. I'll give you a hint why: it's the voice! 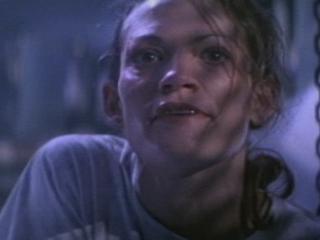 Now, one of my problems with moves like this that I don't really care about is that I hardly ever catch any of the characters names. I got Ridley and Cale and Dante, but fuck knows who those other people were. Stopping to read the credits, however, I find out that many of the characters were actually named after horror directors. The fat bearded guy was John Carpenter; somebody else was Sam Raimi (maybe one of the terrorist guys); Ridley's first name is Scott so there's Ridley Scott; and Dante is probably Joe Dante. Normally I like this kind of homage-y stuff but it really doesn't make sense here because this is a piece of shit sci-fi future movie that no one has ever seen.

As for the sci-fi aspect, it wasn't that bad. Apparently in the future, hi-tech companies still use keycards and the look of their computer programming hasn't changed since 1994, when this movie came out. The setting and the Warbeast itself, however, were fairly well done. The building is a maze of cold metal hallways and heavy doors so there is some attempt at a good design. But the Warbeast... oh the Warbeast... he's amazing. 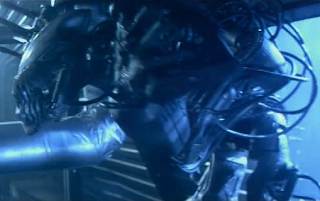 The Warbeast is this like 8-foot tall mechanical thing with a bit metal mouth and big metal claws. Think of that robot that Lara Croft was practicing with at the beginning of Tomb Raider

. And the claws move around in a way that also reminds me of the beginning of Wes Craven's New Nightmare

when the Freddy glove goes crazy on the movie set and kills those two dudes. Put those together and you've got the villain of Death Machine

. The effects on this thing are kind of funny with the way it moves and kills - which we sadly hardly get to see any of. I wanted to see that big metal mouth biting someone in half or something but the attack scenes are conveniently edited so we miss all the good stuff and we just see a bit of the aftermath, which is not that exciting.

I was expecting a lot more bad dialogue than was actually present in the movie. Not to fear, though! There are some pretty funny lines to be found. When Dante sends the group a threatening fax (scary, right?) one of the men actually says the line, "Go fax yourself!" I know. I couldn't believe it either. Probably the worst one is when Cale and the other dude finally escape the building and run into a cop. The Warbeats jumps off the roof right onto him, but before he dies, the cop yells out.... wait for this... "Holy donuts!" Fantastic.

While not a complete disaster, Death Machine

is certainly deserving of a spot in Project Terrible.
Posted by Michele (TheGirlWhoLovesHorror) at 12:55 PM


About The Girl Who Loves Horror