My Conundrum about Funny Games

. I've been wanting to post something about this film for awhile, but I still couldn't process my feelings about it. I needed to try to wrap my head around the fact that I really like it and really don't like it at the same time.

My introduction to the film was pure chance - or perhaps it was fate. I had not heard word one about it prior to running across the snazzy cover at the video store. I've now seen both Michael Haneke's original version and the American version, but the one I blindly picked up at the video store that day was the American one and that will be the one I'll be referring to in this discussion. Haneke directed both movies and the American version is a shot for shot, line for line, and action for action remake of the original, so they are basically the same movie.

Anyway, like I said, the DVD cover is what attracted me to the movie. It's a plain white cover with gloved hands resting on a bloody golf club. That combined with the oxymoronic title of Funny Games

(okay, the name itself is not oxymoron but rather an oxymoron to the picture, I mean) made me pick it up and look at it. I read the synopsis, saw that it starred Naomi Watts and Tim Roth, and thought it sounded like a good thriller. 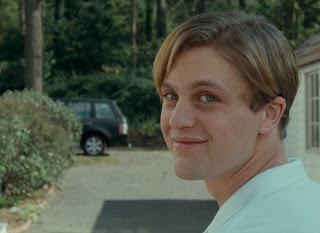 Mmm, not so much. Instead what I got was something completely different. Don't get me wrong, I saw the skill of the movie right off the bat. This is one of THOSE movies; one of those artsy-fartsy, never gets a single shot wrong kind of movies. There is no music save for the credit sequence. Every shot is meticulously and methodically set up and executed. Every action by every actor and every line they say is precisely and specifically planned out to milk an expected reaction out of the viewer. The technical skill is obvious and that is why I like the movie so much. It's a good movie.

But I don't like what the movie says - or what people have interpreted it to be saying. To be clear about what issue I'm addressing here, here's a true story: My initial reaction to the film was that it was emotionally exhausting, but again, a good movie. So when I found it a the video store for cheap, I immediately picked it up for purchase. My sister was with me at the time and asked what the movie was about. I told her - family held hostage and crap by these two psychos blah blah blah and here's what she said: "Does the little kid get killed?" "Yeah, actually, he gets shot in the head." "Why do you want to watch a movie where a little boy gets shot?" HARSH. And she said that with all seriousness. I actually felt really bad, like, almost dirty. I know she was probably only saying that because she has a young son of her own (well actually she has two now) and so she is probably more personally affected by that than I am at my point in life, but still. Her comment had me seriously considering if there was something wrong with me. 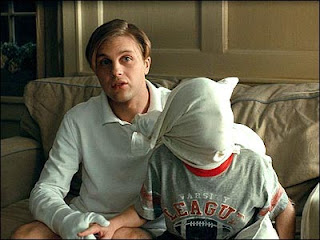 I've scoffed at such perceived notions of horror and other violent film fans in the past. But the nature of how the violence was depicted in Funny Games

and my liking it coupled with my sister's comment made me look into the issue more. I read many discussions on the internet regarding this movie and its message. A lot of what I read interpreted the director's meaning as a comment on violent movies and why people watch them. Funny Games

' synopsis promises a lot of violence but never actually shows it. The constant breaking of the fourth wall and the rewind scene tease the viewer about what they are going to and not going to see, and we should know right away from these scenes that the good guys are not going to win in this situation. The bad guys had the control from the beginning and throughout, so it seems like the movie is asking, "Why/Are you going to keep watching this? You know it's going to turn out bad for the good guys. Do you want to see them die?!" 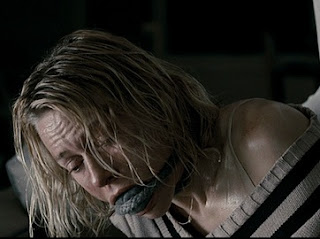 The experience of watching Funny Games

for the first time was frankly rather unsettling, uncomfortable, and a trip to a place I didn't want to go, personally. I didn't want to be labeled a villain for enjoying violent movies, nor did I want to be confronted with why I like watching them in the first place. I haven't been hardcore into to horror for as long as I have been into more intense and dramatic media overall. The harder to watch, the more emotional... the more I wanted to see. In real life, I'm one of those emotional-bottlers. I may be feeling a lot of serious stuff, but I'd never tell anyone about it. So I learned that I could feel any and all things by experiencing them vicariously through film. Once you do that, however, you basically have no choice but to become emotionally involved in almost everything you watch (or at least anything serious enough to evoke such a response).

And so because of the story of Funny Games

and the superb way it was acted, of course I was emotionally invested in the characters and their plight. Sure, I wanted to see some violence if it was presented, but not against the family. In this sense then, the director failed. Putting the most insane violence in one movie - with limbs flying off, decapitations, death by saw or whatever - doesn't do anything for me in the least emotionally. But kill one child off-screen with a shotgun and I'm a wreck. It's all relative to the situation put before you on the screen.

Typing this now, I am also for the umpteenth time watching 7 Days

, one of the most cold and depressing and emotional movies I've seen in a long time. But at the same time, it is an absolutely gorgeous movie. Beautifully shot and superbly acted, and it deals with a lot of tough issues. Another true story: My brother-in-law borrowed The Last House on the Left

2009 from me, and when he came back from watching it, he was like, "You like this movie?! That scene where the girl is raped?" Again, I felt bad, but I had to tell myself that yes, I do like this movie - love it, in fact - because I think it is a beautifully done picture, including the rape scene. Art is not The Forty Year Old Virgin

. Art is those pictures and movies that dare to show you the real world and its harsh realities. The intent of art is to get those emotions out of you and really make you feel them. Funny Games

, and The Last House on the Left

all do these things very well, but the dark places they get into and the issues they force you to confront make some people very uncomfortable. And they don't understand why others do actually like watching that kind of stuff.

I'm talking in circles, I'm sure, but Funny Games

and my sister's comment to me about it have been bothering me in the back of my mind ever since it happened. I know that I'm no serial killer and watching a hundred horror films will never make me go out and kill a person in real life, but why do I get all giddy and think it's awesome when a guy's head is chopped off and blood spurts everywhere? It's all part of the gag and the fun and escapism these movies provide and not because I think violent death is "cool.

So I guess what I'm trying to say is that if you have ever asked yourself that serious question of you like to watch dozens of people getting killed on screen, ask yourself how you react to a movie like Funny Games

. Stories of real-life violence or violence in a movie that is presented in a more realistic way should still make you sick and disgusted, and if that's the truth, then you're okay. Go out and watch all the horror movies you want and know that it's alright. Most of you have probably already gotten over this issue, but in the weeks it has taken me to write this post, I know now that other people don't have to be okay with me watching these movies. I do. And you know what? I know I'm fine.
Posted by Michele (TheGirlWhoLovesHorror) at 4:52 PM


About The Girl Who Loves Horror