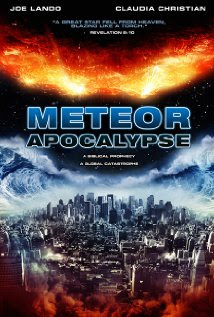 I'm almost inclined to give Meteor Apocalypse a bad review just because the way the title and the cover lied to me. Look at that poster! Looks kind of awesome right? Not so much. Meteor Apocalypse is my first non-snow-related Project Terrible movie, and it was assigned to me Maynard of Maynard's Horror Movie Diary. 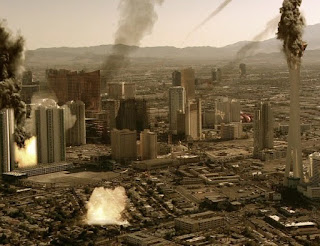 The movie opens with all the nuclear warheads in the world heading toward a giant meteor slowly approaching Earth. They blast the shit out of it, but somehow screw that up and now all these tiny meteors are going to crash into us instead. But that's not even the real problem - the meteor pieces fall into bodies of water and contaminate the water supply in the area, causing seizures and death. The movie follows a man on a journey from Las Vegas to Los Angeles in search of his wife and daughter who were taken during a quarantine.

So Meteor Apocalypse is honestly not that bad. It sure as hell was not what I was expecting it to be based on the title. "Meteor Apocalypse." You would think that the movie would be all action-heavy, full of big, falling space rocks causing all kinds of fire and explosions and shit, right? Well, you would only be partly right. Like 10% right. That's about as much action as you're going to find here, because they chose the "post-apocalyptic" feel for this story, making it a bit more subdued and serious. And boring. And disappointing. But still not really bad. It's a competent film with okay actors and characters, but the story is too mapped out and clichéd. You've seen all this before. 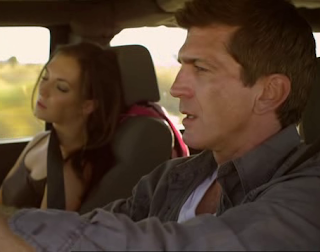 Our main character is David, who gets separated from his wife Kate and 12-year-old daughter Allison. Allison unfortunately ingested the contaminated water, so there's that plot point. David is also afraid of heights - also a plot point. Somewhere along the way in David avoiding the authorities and wandering around the desert, he comes upon this hot chick named Lynn who also drank the bad water. He saves her, and the two of them spend the rest of the movie getting into trouble together while looking for Kate and Allison. At the same time, some head honchos in Washington D.C. do... some stuff. I didn't really see the point of this whole side plot so that's all I'm going to say about that.

It's really kind of weird to me that someone would have a movie called Meteor Apocalypse, and then have the meteors not be the main threat in the film. Granted, the meteors are the thing that cause the sickness from the water that actually is the main threat in the film, but it's still unexpected and doesn't make for a very exciting night with the movies. I started to really sick of bottled water while watching this. Seeing as how our two mains spend a lot of the movie wandering in the desert on foot (how the fuck they know where they're going is anybody's guess), they always need clean water. They're always thirsty. Always looking for water. Oh, a water bottle! Happy day! There's even a scene where they get in the middle of firefight with two criminals and two FBI agents, right next to a box truck full of bottled water. It's fate! The universe wants them to succeed. 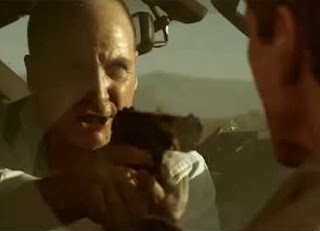 Which, of course, they do. You know the ending way before the movie gets us there. David will randomly run into his wife and daughter; his daughter will be almost dead (remember, she drank the bad water); but David will be able to use his last vial of the antidote (yeah, somewhere along the way he and Lynn find his friend who has the antidote and he takes two doses) and save her, and then right after that, the whole family will be rescued. And that's exactly what happens. Well, what I didn't really see coming was Lynn dying - SPOILER - but I think she kind of needed to die because she was starting to become a homewrecker.

Technically, "Meteor Apocalypse" is a totally appropriate title for this movie - because the meteors sort of start a mini-apocalypse... well maybe calling it an "apocalypse" already is jumping the gun but anyway - but it really does make you think that you are going to be watching a completely different movie than what you end up with. Yes, there are some bad effects shots of fiery meteor balls hurtling dangerously towards our characters (don't worry, they of course get out of the way JUST in time... usually) throughout the movie, but most of Meteor Apocalypse is character stuff. Which is a good thing! This is not a crappy Asylum movie with tongue firmly planted in cheek. It's well made and the characters are fine and the story works for the most part. So what's my last Natural Disaster movie? Another end of the world thing? Goody.

Posted by Michele (TheGirlWhoLovesHorror) at 8:43 AM